Suzanne Forsey Moore, a 45-year La Jolla, California resident, passed away at her home on Wednesday, Aug. 20, with family at her side. 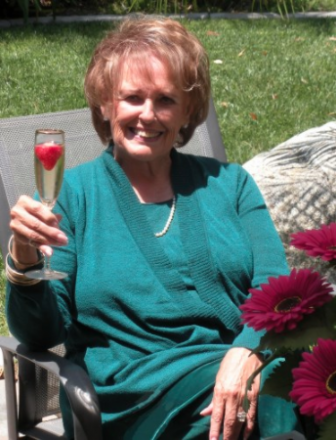 Suzanne is deeply missed by her loving family and her many life-long friends.Suzanne was born in Lockport, New York on March 14, 1926 to Rosaltha Mary Goble Forsey of New York and William J. Forsey of Wilham, England.

Suzanne married her beloved husband, Ward F. Moore in 1944, just prior to his deployment to Europe. As a young woman in the early 1960’s, Suzanne worked with the Harkrider Modeling Agency out of New York City and was featured in LIFE magazine and various other travel magazines.

Suzanne had packed her two youngest children in a loaded sedan and ventured across America coast to coast, meeting her husband in La Jolla, overlooking the magnificent cliffs of the Pacific Ocean. It was one of the family’s many wonderful lifelong adventures.

Suzanne was a woman ahead of her time in business. Along with two business partners, Suzanne opened Reincarnation on Fay Avenue in La Jolla in 1975, one of the first upscale resale clothing shops in Southern California. This San Diego women-owned business for over 20 years was a favorite of locals and visitors alike.

Suzzi was a very accomplished bridge player who played, studied and competed for many years. Her passions also included sailing her Coronado 25 in San Diego Bay, playing tennis and golf and traveling.

Suzzi was an active member of the San Diego Yacht Club, La Jolla Country Club and the La Jolla Beach & Tennis Club where so many wonderful friendships were made.

She is also survived by her three great-grandchildren.

— This obituary was published on Legacy.com (where online condolences may be left) via the San Diego Union-Tribune. The headline of the obituary there lists her year of death as 2020, but the obituary, as originally published, twice says 2014, which appears to be incorrect.