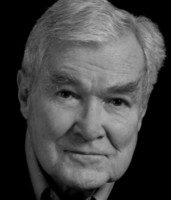 Born July 20, 1930 in Cleveland, Ohio, Morris was the eldest son of Robert E. Morris, a Kentucky farm boy who became a fashion buyer at New York department stores, and Marjorie Dickie Morris, an artist and member of Portraits, Inc. in New York, as well as the Silvermine Guild of Artists in New Canaan.

Rob spent his childhood in Harrison, N.Y. As a boy, he longed to be an Indian warrior, and, after making his own flaming arrows, once set the family’s grape arbor on fire during target practice.

He graduated from Harrison High School and went on to Dartmouth College, class of 1952, where he majored in philosophy and English. In his sophomore year there, he won a welterweight championship in boxing.

— An obituary from Magner Funeral Home

After college, Morris served as a Lieutenant in the U.S. Navy from 1952 to 1955, working on military intelligence, which he sometimes claimed was an oxymoron.

While stationed in Japan, Rob was inspired by the marvels of Japanese cuisine, and cooking became a lifelong interest. His kitchen advice was simple: “Meat should be rare, almost bloody. Knives should be sharp.”

When his military service ended, Morris went into the advertising business, and worked at various agencies, including McCann-Erickson, and McCaffrey and McCall, where he worked on John Lindsay’s mayoral campaign. He was once listed by Esquire magazine as one of ten most eligible bachelors in New York.

In the ’70s, Rob left advertising to renovate brownstones on Dean Street in Brooklyn, N.Y., and there opened The Critical Cook, a store on Atlantic Avenue, which sold fine cookware. In 1976, he opened the West Coast branch of the store in Beverly Hills, Ca. In the 1980s, he began to design kitchens, and in 1988 founded Robert Morris Associates, a kitchen design firm, in Darien.

He also began in mid-life to paint seriously, and exhibited his work at the Greenwich Art Society, as well as the Rowayton Art Center and local banks. His work won several prizes and is in many private collections.

Known for his extravagantly long eyebrows, his dazzling wit, and his inability to suffer fools without a stealthy remark, Morris was beloved by small children — for his storytelling gifts, and his indulgence of their wish to paint his legs with cake frosting at birthday parties.

He is also survived by Gillian Patrick of South Norwalk and Stonington; and her children, Nicholas and Rupert Patrick, and their families; and by his former wife, Bourne Morris, of Reno, Nev.

His sister, Joan Morris Manning, of South Norwalk also survives him; as does his brother, Peter M. Morris; and sister-in-law, Ginny Morris, of Newtown, along with a raucous band of nephews and a niece — Jake, Duncan, and Sam Morris, Rob, Jim, and Kate Manning — and many great-nieces and nephews.

A family memorial service is planned for the spring.