It was a good month for the Technology & Engineering Department at Darien High School with one teacher was named state ‘Teacher of the Year’ and another invited to a national conference to speak about fuel cell cars.

“I understand there was some stiff competition this year,” said Richard Reynolds, Technology Education department coordinator. “He is a stellar teacher, a wonderfully resourceful and respected department member. It gives me great pride to be able to work alongside him every day.” 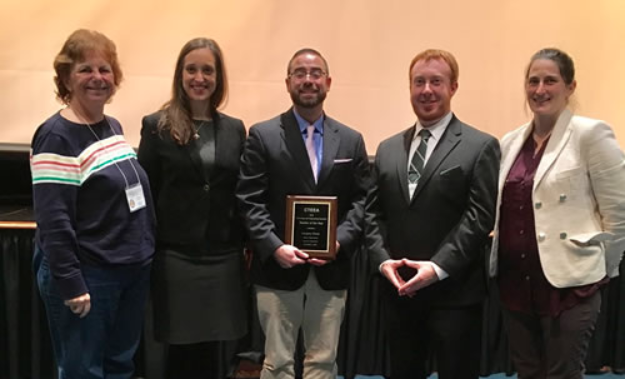 DHS teacher Greg Darin presented with “Teacher of the Year” award and surrounded by other teachers in the Technology Education Department at Darien High School and DHS Vice Principal Kate Dimoulas.

Darin was presented the award at a statewide conference in Portland, Conn., which was attended by DHS Assistant Principal Kate Dimoulas and members of his department. Darin will be representing Connecticut at an international conference for Technology & Engineering in Atlanta, Georgia this spring.

In addition to the state-wide accolades for Darin, Reynolds was invited to speak at the Fuel Cell Seminar and Energy Expo in Long Beach, CA. Reynold’s presentation, “The State of Fuel Cells in Public Education”, focused on the difficulties of getting students involved in a technically demanding field of study. He believes more opportunities for work study, internships and engineering/science-based competitions are needed.

“I was able to meet and share ideas with real titans of the industry and see the next stages of development of a technology that is truly cutting edge,” said Reynolds.

CCAT and the Connecticut Hydrogen-Fuel Cell Coalition work to enhance economic growth in Connecticut through the development, manufacture, and deployment of fuel cell and hydrogen technologies and associated fueling systems.