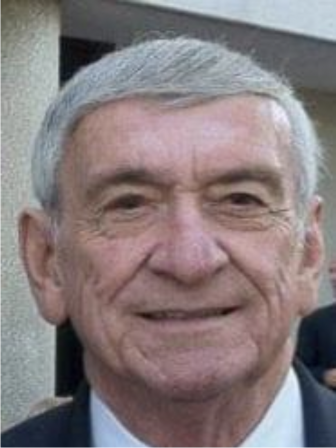 He was a Darien resident for 30 years and lived in Norwalk for the past 19 years. He was predeceased by his loving wife of 59 years, Carol Dawn McGee.

He played clarinet and bass clarinet and performed in concerts and parades coast to coast, including the Rose Bowl parade and game. Robert graduated from Michigan State with a degree in business. After college he served in the United States Navy on a destroyer out of Newport, Rhode Island and Barcelona, Spain.

In 1973 he moved to Connecticut to start a wholesale division for Walden Book Company and its 2,000 stores. His office and showroom were at the Algonquin Hotel. which has a long literary history. In 1979 he moved to the publishing side of the business and served as executive director of promotional sales for Crown Publishers and Random House.

He retired from Random House in 1996. After two months of retirement Robert chose to go back to work and served as executive sales director at Running Press and Publications International, New York. He retired for good in 2009. Robert was the author of and contributor to numerous Publishers Weekly articles. He also served on the National Board of Directors for the American Booksellers Association.

Robert was an active member at First Congregational Church of Darien for 49 years serving on the Church Council, Board of Deacons, and Board of Outreach. He was a member of the Board of Directors for the Ledgebrook Condominium Association. In retirement Robert found great purpose volunteering at the Open Door Shelter in Norwalk. He received the volunteer of the year award in 1996 for his work with the Homeless Interfaith Network.

Robert is survived by his two daughters: Carrie McGee Yurof and her husband, Lawrence Yurof; and Anne Bonanno. He is also survived by three grandchildren: Leonardo Bonanno, Katharine Fausel and Ellen Cervone, and Ellen’s husband, Thomas; three great grandsons: Corbin, Thomas and Robert Cervone; and a son-in-law, John Muldoon. In addition to his wife, Carol, he was predeceased by his daughter, Elizabeth Muldoon; three brothers: William, Donald, and Harold McGee; and a sister, Jean Haut.

A memorial Service will be held for Robert on Sunday, Oct. 9, 2022 at 2pm at the First Congregational Church of Darien.

— This obituary is from Lawrence Funeral Home, where online condolences may be left