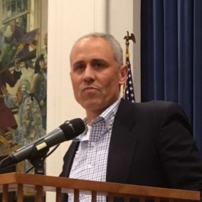 Before the The Darien Public Schools budget was approved by the Representative Town Meeting, three speakers gave their remarks on it. Here are their speeches (as prepared):

Good evening, I am Dennis Maroney of district 3 and I am chairman of the Education committee.  I would like to move 16-12 B, an appropriation in the General Fund to the Education operating Budget of $93,847,816, may I have a second? 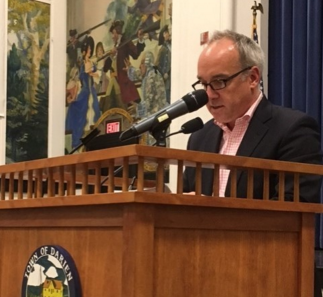 Dennis Maroney, chairman of the Representative Town Meeting Education Committee, giving the committee’s report on the 2016-2017 education budget to the RTM. (Photo contributed by Jim Cameron)

The main driver of the recommended increase, is as usual Health/Insurance and Personal RC, (Responsibility center.)  This accounts for 77% of the entire budget.

Why am I bringing up these numbers?  Just to show that yes the school budget has increased since 2000, but it is due mainly to the increased student population.  State mandates, special education directives and health care insurance premiums have also impacted the finances.

Statements from other major speakers at the RTM annual budget meeting Monday:

This budget was developed using a zero-based budget.  The Board and administration looked at the approved budget for 15-16 and compared that to what was spent versus the budget.  The new budget was built on what has been spent taking into account the budget trends over the past few years. This is also compared to our peer group towns where we spend approximately $604 less than New Canaan, $1,497 less than Westport and $279 less than the average in District Reference Group A (DRG-A).

The key educational investment this year is in technology.  The plan is for a 1-1 computing environment for students in grades 5-7.  The students will have an individual device to use at school and home.

In 4th grade the students will also have a Chromebook, but will not be allowed to take home.  Grades 2 and 3 will share 25 Chromebooks between 2 classes.  Kindergarteners’ will have one charging cart to share amongst the classes in each school.

Along with the computers comes the need for additional independent consultants to help support the implementation along with funding to expand the wireless infrastructure in the schools.

This is the first part of the four-year technology plan ending in 2018-2019.  Besides the ability of technology to maximize student learning, achievement and potential it will also create opportunity to reclaim the existing computer labs at the schools.  To build a new classroom would cost approximately 250K  helping pay for the roll out by creating more space.

On May 2, 2016 with 14 of 15 members the RTM Education met to vote on the appropriation of $93,487,816.  In attendance was Dr. Brenner, the Superintendent;
Mr. Michael Harman, Chairman of the Board of Education; Board of Education member Katie Stein and members of the public.   The committee discussed many questions regarding the capital projects, but for the operating budget there were not as many questions and the Education committee voted unanimously to approve and recommends the RTM do the same.

The committee would like to thank Dr. Brenner and the administration for their time and effort in crafting what we believe to be a budget that balances fiscal responsibility and the primary objective the wonderful education of over 4,800 students in the school system.  We would also like to thank the Board of Education for the hours of work and devotion they put in as unpaid elected officials.

Thank you Mr. Maroney and the Education Committee for a very thorough report on the Board of Education budget. I will try to be brief and repeat as little as possible. 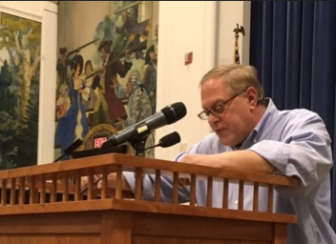 The drivers of this increase are as follows:

The technology plan is related to the implementation of the 1:1 initiative allowing Darien students to be competitive with not only other school districts but within the competitive global environment. The use of outside consultants versus increasing the district’s FTE’s, new software and purchase of devices are the largest line item increases associated with this initiative.

Special Education – The lion’s share of IEPs are done between April – June, near the end of the school year. Between April and June in 2015, the district experienced a significant increase in out of district placements from IEPs — for which the associated expense was not budgeted. This increase was partially offset during the current 2015/16 fiscal year by favorable variances from combining the healthcare and prescription carrier.

I remind members of the RTM that our town has a legal obligation to adhere to agreed IEPs. This year, the BOE also increased the Excess Cost Reimbursement grant by $500m to partially offset these increases resulting in a net $998m or 4.7% increase in the SPED budget. Without the SPED increase, the remaining school budget increase is 2.3%.

Excess Cost Grants — The budget assumes that the Excess Cost Reimbursement for special education expenses from the State of CT will be $2.3mm an increase of $500m that reflects some of the increase in out of district tuition. That being said, the new proposed CT State budget has a $4mm cut to the ECR pool, or a 4% overall reduction. While the effect of this cut cannot be quantified as we discuss approval of the BOE budget tonight, it does create risk to the BOE budget in the next fiscal year if the anticipated % of reimbursement is less than budgeted.

The RTM F&B committee has been impressed with several cost saving initiatives and the “business approach” introduced by Dr. Brenner and the district’s new administration leadership team while moving to enhance educational outcomes of all students. The F&B committee looks forward to further implementations during the next fiscal year.

At our meeting on Monday, May 2, with 10 members present, the F&B Committee voted to approve the Education Operating budget with 8 in favor and 2 opposed.

The minority opinion was that the operating budget should have been reduced to coincide with the proposed cut in state grants and the overall expense increases over the last 4 years need to be addressed.

Good Evening, Madame Moderator, members of the RTM, elected officials and the town of Darien. I thank you for the opportunity to present the Board of Education Recommended Budget for 2016-2017. 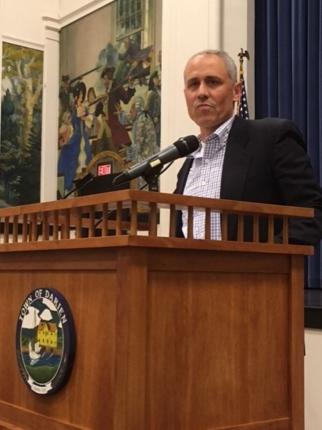 Michael Harman, chairperson of the Board of Education, speaking to the Representative Town Meeting before the RTM voted to approve the education budget. (Photo contributed by Jim Cameron)

This past December, I had the opportunity to address this body on the State of the Schools and its progress forward under the leadership of the new Superintendent. Tonight I return to this body to ask you for your continued support for the high quality education, programs and services the District provides.

The budget that the Board of Education is presenting tonight reflects the support of the current level of excellent instructional programs that Darien has come to expect while at the same time seeking to maximize the economy of resources.

The Budget includes recommendations for enhancements to existing programs and addresses areas within the educational system identified as needing additional resources.

In the State of the Schools’ presentation, we highlighted the vision and focus of the new Administration but also identified Professional Development (PD), Technology and Facilities as those areas requiring additional resources. The budget that our Superintendent presented to the Board of Education on Jan. 5 is the translation of that vision into programs and initiatives.

The Darien Board of Education is submitting this evening a 2016-2017 Recommended Budget $93,847,816, which represents an increase of 3.44% over the approved 2015-2016 Budget. This budget balances the educational excellence that is expected by our community and our fiscal responsibility to the Town of Darien.

The Administration is committed to seeking ways to deliver the educational experience in a most efficient manner possible, and our Board has spent many hours in committee and meetings, discussing, reviewing and scrutinizing this budget. This is a budget that includes no increase in FTE, even though the District is projected an additional increase in enrollment of 10 students.

This is a budget that includes Contractual personnel increases of $1.6MM, Health Insurance increases of $274M, and increases in Tuition Non-public schools of $1.1MM, but this is also a budget that includes an increase in Technology spending and Professional Development in the amount of $682M. The proposed introduction of the technology plan and increase in PD was achieved by careful review of all accounts, and mostly offset by the net decrease in other accounts of $626M. I will caveat that there is heightened concern regarding the proposed increase in the Excess Cost Reimbursement in light of the current State budget pressures, but this is a Budget that has been poked and prodded and supports all the new initiatives the Administration is planning to implement.

The Administration and Board of Education are committed to providing an excellent education for all children of Darien. The Administration has continued to develop a budget within the context of a zero-based budget, and this evening we can report that we are forecasting to end the 2015-2016 school year in a positive position.

However, we continue to depend on the support of our parents and our community to fund the ever-increasing cost of education and unfunded mandates of the State and Federal government. The Board of Finance, the RTM and the Town of Darien have been critical in their support of the Darien Public Schools.

We would like to thank the members of the Board of Finance, the RTM Education and Finance & Budget Committees who challenged us to carefully look at the management of the school district’s financial resources. We listened to your recommendations and we’ve answered your challenge.

With the RTM’s longstanding support of education in Darien, together we built a great asset for the town of Darien. Not only our school system, but more importantly our students. It goes beyond the brick and mortar; the students are the core of our school district. They represent the future of our community. I request that you support this investment in the future of our community by supporting the Darien Board of Education 2016-2017 Budget as presented.

4 thoughts on “Remarks on the Education Budget from Town Officials”