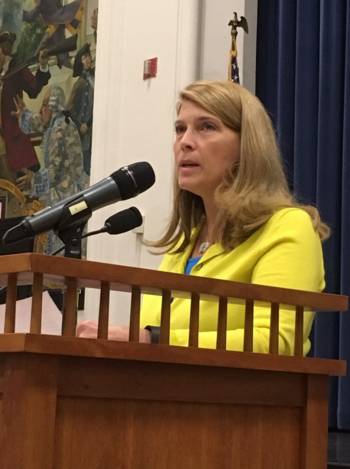 First Selectman Jayme Stevenson and Jack Davis, chairman of the Representative Town Meeting’s Finance & Budget Committee, gave these statements (as prepared) to the RTM before it voted on the Board of Selectman’s budget for 2016-2017:

Good evening Madam Moderator, RTM members fellow officials and our viewing audience. Thank you for the opportunity to address the RTM and ask for your support tonight of the Board of Selectmen’s budget as proposed by the Board of Finance. 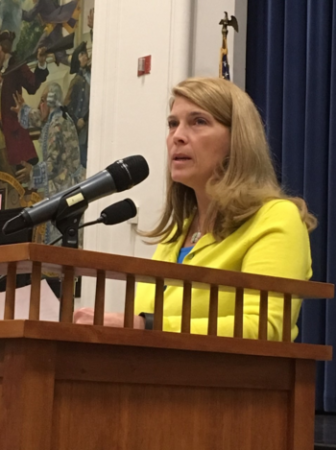 The Board of Selectmen has worked diligently since January to propose a very responsible operating and capital budget. I want to thank the F&B Committee and Board of Finance for joining the Board of Selectmen from the beginning of our process and offering wise counsel as we deliberated each and every line item in our budget.

The outcome of our process is noteworthy. The Board of Selectmen’s operating budget, net of total town/Board of Education debt service ($11.5 million), is proposed to increase only 0.2 percent over last year’s budget — and that amount includes fully funding the $3.6 million Library budget. The Library budget represents 11 percent of the total Selectmen’s budget.

Also noteworthy is our budget work with our three volunteer fire departments. The town will now be paying most of the departments’ operating expenses directly and providing each department with a modest discretionary grant. Taking these

expenses in house will allow us to seek efficiencies and reduce overall expenses. I want to thank our wonderful volunteer fire departments for their cooperation.

Capital project spending ($384K) increased slightly over last year due to the addition of a generator ($250k) for town hall and the Mather Center, a new phone system ($59k) deferred from our 2015-16 budget, four law enforcement vehicles ($160) and $70k to begin the permitting for dredging three sedimentation basins throughout town.

We’ve agreed to defer the Town Hall generator as part of the proactive plan to address yet-unknown state funding cuts. When we can afford it, the generator will allow us to utilize the Mather Center as an emergency shelter and cooling/warming center as originally proposed. Without it, this facility cannot be included in our emergency operations plan.

Statements from other major speakers at the RTM annual budget meeting Monday:

In any ordinary year, a less than ½ percent operating increase would be considered an extraordinarily positive budget outcome and in any ordinary year with rates holding at all-time lows, we would be moving bondable capital projects forward. But as we know, the State of Connecticut’s fiscal crisis has made this year anything but ordinary. No mid-term budget adjustments have been made to address mounting deficits, state revenue

projections continue to plummet and there has been no consensus budget adjustment made in spite of no less than 5 proposals since January.

In an unprecedented gesture, on April 18th, our Board of Finance made additional budget adjustments in an attempt to proactively respond to cuts signaled by the Governor. No other municipality has taken this kind of prudent and conservative action.

The truth is, we don’t know when or if cuts will be made and for how much but the thought process is to be prepared. We will, of course, respond as needed if and when that information comes and I strongly suggest, as we look to fiscal year 2017-18 and beyond, we acknowledge the continued fiscal challenges of the state in our revenue assumptions.

Until then, I recommend and respectfully ask that you approve the Board of Selectmen’s budget as proposed by the Board of Finance. 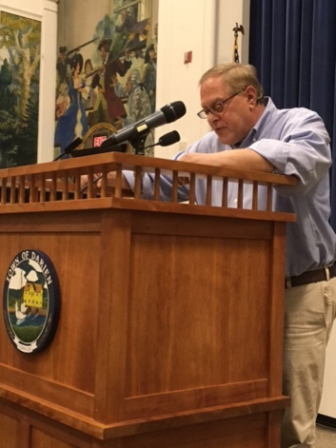 By way of background, this portion of the budget is comprised of four primary parts:

1. Town Services – Includes public safety, human services, parks & recreation, public works and general government. This is the portion of the budget that the Board of Selectman and the town administrator are responsible for managing. This portion of the budget is $26.9mm, up $59m (or 0.2%) from last year. For the second year, the Town had favorable pension and police retiree medical benefits of greater than $600+m that should not be anticipated during the 2017/18 budget year. In addition, the Town benefited from moving employees to the HSA as the Town finalized its union contracts. The largest single increase was in Protective & Emergency Services for $378m with patrol accounting for $260m of that increase – most of which was the result of finalizing the union contract. There were some staff additions this year –

* One FTE for P&Z to handle current workload demands in addition to significant incremental volume from proposed new initiatives. The increase in fees adopted by the RTM this year will partially offset this hire

* And the conversion of two p/t positions into a full time position in Human Services. The new FT employee was already participating in the pension plan based upon hours worked resulting in minor incremental costs.

2. Library Operating Budget – The Library, although privately owned, the Town pays for its operating budget. The Library’s proposed budget is $3.583mm, up $77m (or 2.2%) from last year. The drivers of this increase are:

* Initial raises to employee salaries to bring in line with market standards and corresponding benefits for $127.8M or 4.8%

3. Debt Service – This debt service, which include that attributable to Town’s capital current and past projects as well as the Board of Education’s current and past capital projects is $11.546mm, up $247m (or 2.18%) from last year.

The current debt service allocation is 67% for Board of Education projects, 26% for Town projects and 7% for Sewer projects (which is paid specifically by user fees).

As of July 1, 2016, the Town will have approximately [$71.8mm] of outstanding debt, down from [$77.5mm] the prior year. Based on our current debt amortization schedules, we expect to repay approximately $9.4mm of debt in the coming year. Within this budget, there is no issuance of new debt. That being said, as previously mentioned, new bonding resolutions should be anticipated next fiscal year to cover the Public Works garage; the DHS cafeteria extension and possibly other smaller capital projects. Barring any significant new capital projects, our Town’s current debt amortization schedule expects significant decreases in our Town’s total debt over the next few years.

4. Capital Projects – These are the capital projects that are being paid for by levying taxes or spending cash reserves and do not include any off budget capital items previously mentioned. Capital project appropriations are $5.2mm total. After taking into account state grants of $497m, the total capital projects are $4.682mm net; up $57m (or 1.22%) from last year. This $4.683mm is broken down between Town projects and Education projects.

Town projects of $2.667mm or up $106m or 4.13% and include capital for fire department apparatus replacement ($400m), sidewalk rehabilitation ($200m) and new sidewalk installation ($210m), PW equipment reserve ($170m), and 3 police vehicle replacements ($120m). Another item now in capital is repaving our roads for $845m offset by two state grants – Locip for $113m and Town road aid for $337m – resulting in a net of $495m. Two notes here regarding the move of paving roads to capital accounts – the prior year Town capital budgets lines have been adjusted to reflect this accounting change and while this amount is now in capital, we view it as an annual expense that should not be included in a bond issuance.

Board of Education capital projects of $2.016mm, down $49m or 2.38% and include new turf for the stadium field ($500m), installation of a new asphalt roof at 35 Leroy ($370m); the last school emergency generator ($165m) and moving the main office and nurses station at Hindley school to provide better security and safety ($220m).

In summary the Town’s Operating Budget is as follows:

At our meeting on Monday, May 2nd the F&B Committee voted to approve the Selectman’s budget with 8 voting in favor and 2 opposed.

Common themes among those voting for the budget were, the BOS held down costs although they benefited from favorable pension cost and growth in the grand list. Cuts to operating budgets at this time did not make sense but rather the Town needs to initiate thoughtful evaluations of revenue in relationship to costs; efficiencies and potential structural budget process changes based on the “new reality” of Darien receiving little or no state funding/grants in the future. In addition, coverage of off budget cycle expenses like paramedics and possible demands on the town’s fund balances during the next fiscal year should be taken into account while evaluating these budgets.

Common themes among those voting against the budget were, although the BOS overall did well holding down costs:

* While in favor of the original April 7th budget, to cover the proposed loss of State grants, operating budgets should have been cut in addition to capital to the entire proposed shortfall