Months ago, without mentioning the implementation of the policy to the public, the Darien Police Department instructed officers to wear body cameras, regularly recording all interactions with the pubic.

What various town officials have said as recently as Monday about a union complaint over how the policy was being implemented seems to be contradicted by an agreement reached Thursday between the town and the union.

First, the agreement announced Friday shows town’s bargaining position appears to have been weak, even though town officials indicated it was strong.

Second, the negotiations — completed Thursday, five months after the grievance was filed — were far from dead in the water, as town officials indicated Monday. 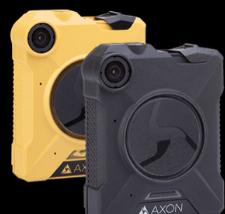 The Police Department last year was expecting to get body cameras that looked like this, the Taser brand “Axon Body 2” model.

Town officials weren’t in their offices late Friday afternoon when Darienite.com sought comment from them: Police Chief Ray Osborne was out of the office by mid-afternoon Friday, not long after police announced the agreement. First Selectman Jayme Stevenson, Town Administrator Kathleen Buch and Human Resources Director Laurie Dunn had left Town Hall before the end of the day, Friday.

Early on Friday afternoon, the department made its first public announcement (other than the chief’s brief statement during a board meeting Monday) that police officers’ interactions with the public were regularly being recorded with body cameras:

All Darien police officers are currently trained in the use of the body worn cameras and they have been in use for several months.

On Feb. 14, before the body camera policy was begun, the police union filed a grievance objecting to the way the procedure was being put in place. The union said the matter was the type of change in policy that required negotiation.

On Thursday, the town appeared to agree with that, and on Friday afternoon, in the same announcement, the department said each police officer in the union would be given a “comp” day (a day off) to be used within a year (by July 19, 2018).

The announcement also said: “The department will also agree to identify two administrators of the program and address any issues with extra duty work, as well as address language pertaining to the use of videos for disciplinary or training purposes.”

The announcement said nothing about the Darien Police Association (the union) withdrawing any part of its complaint in order to reach the agreement.

What Town Officials Said Was Happening

At Monday’s Board of Selectman quarterly meeting with department heads, town Human Resources Director Laurie Dunn gave a different picture of the situation involving the grievance, one much more favorable to the town (management).

In her quarterly report, she described the situation this way:

Back in February, the Police Association filed a municipal prohibited Practice complaint related to the implementation of a Police Body-Worn Cameras Program, claiming the town refused to negotiate over the matter.

After the town provided the union with another opportunity to identify any substantial impacts and following a successful pilot program, the Body-Worn Cameras Program was recently implemented.

The prohibited practice complaint remains outstanding with the Police Association at this time as the union has not raised any mandatory subjects of bargaining, nor have they withdrawn their complaint.

When Dunn appeared before the board, Selectman Kip Koons asked her, “You say they’ve done nothing further with it, nor have they withdrawn their complaint. Does it expire after some time without action?”

No, there is a next stage that we need to take. It doesn’t just go away. We have negotiated, and it is likely that we will declare an impasse on that. And then the [state] Labor Board would take the next move, and the police [union] would have an option to file arbitration if they so choose, or they could drop it at that point. It’s kind of a step-by-step process.

[…] Since they filed it, they’re the moving party. They’re really the only ones that can drop it.

Selectman Rob Richards asked: “Does it affect the implementation of it?”

Dunn replied: “No, no. And it’s been fully implemented.”

“We sort of fully vetted the concern over the police union’s — the roll out of the body cameras, and under the former chief [Duane Lovello, who retired early this year] we felt satisfied this prohibited practice [grievance] wouldn’t be filed, but [you] can never be certain. So, thank you.”

Police Chief Ray Osborne spoke soon afterward. His only comment about the body cameras was that the program has been fully implemented, every officer has been trained to wear them, and “every officer is wearing them.” He didn’t contradict anything Dunn or Stevenson said.

On Wednesday, Darienite.com asked the department for a copy of the union’s complaint. The department, through Osborne’s executive assistant, sent an email back to Darienite.com, saying it was treating the request as a Freedom of Information Act request.

On Friday, at 2:32 p.m. Darienite.com was informed that the document, rather than being emailed, was available only on paper, in an envelope waiting at the Police Headquarters front desk. This information came only after the department announced (at 1:12 p.m.) a sudden change in the status of the negotiations: They were completed the day before.

It had taken longer for the department to provide Darienite.com with a five-month-old, three-page document than to revive and finish negotiations to make that document obsolete.

Monday to Thursday — What a Difference a Few Days Makes

After Dunn and Stevenson gave the impression Monday that the town had adopted a reasonable policy that the town expected to stick with (Dunn: “It is likely that we will declare an impasse on that.” Stevenson: “We sort of fully vetted the concern […]”), by Thursday, the town had reached an agreement with the union that seemed to amount to concession after concession.

Comparing the police announcement on July 21 (full text below) with the union grievance document filed on Feb. 14 (full text also below), it appears there was little, if anything, that the union wanted that it didn’t get.

Despite the lack of progress cited by town officials on Monday, the department announcement on Friday characterized the prior months this way: “Since the time that the complaint was received the town has been in discussions with the Police Association in an attempt to amicably settle this complaint.”

On Feb. 14, 2017 the Darien Police Department was notified by the Connecticut State Board of Labor Relations that the Darien Police Association had filed a complaint with them pertaining to the implementation of body worn cameras.

In the complaint the Police Association indicated that the use and implementation of the body worn cameras and the policies connected therewith included a number of items that were subjects of bargaining.

Settlement of the complaint involves giving each member of the Association (1) “Comp” day to be used by July 19th, 2018. The department will also agree to identify two administrators of the program and address any issues with extra duty work, as well as address language pertaining to the use of videos for disciplinary or training purposes.

All Darien police officers are currently trained in the use of the body worn cameras and they have been in use for several months.

Darienite.com was told the document would not be sent (at least not immediately) in electronic form, because Osborne had left for the weekend, so here are pictures of it: 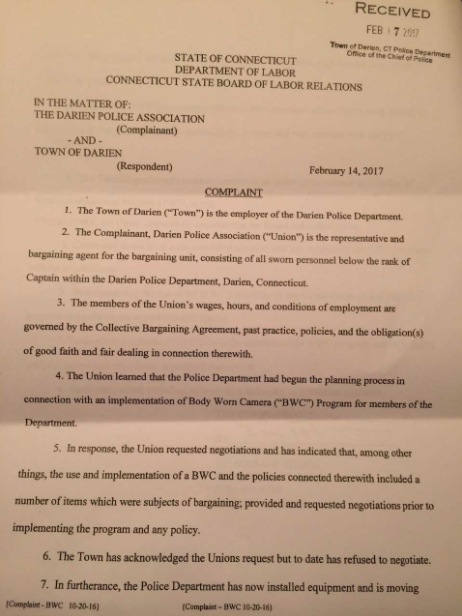 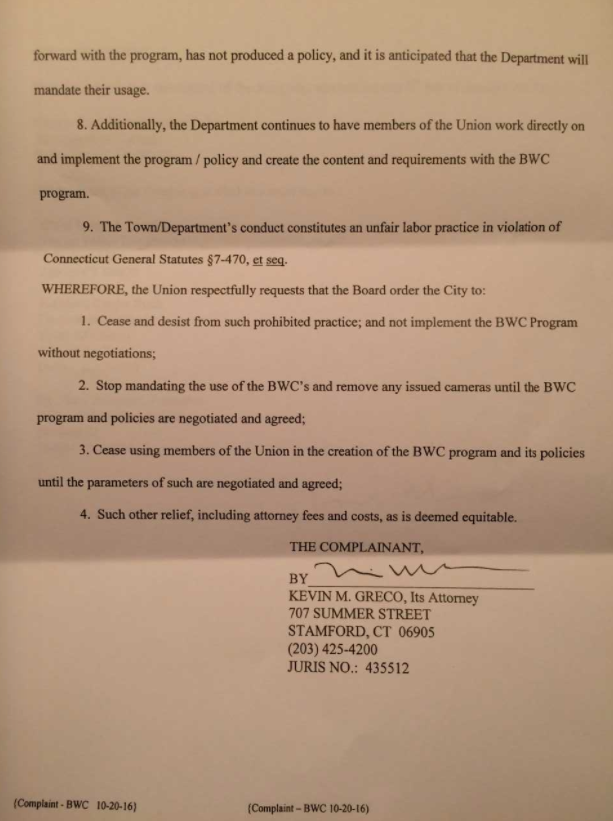 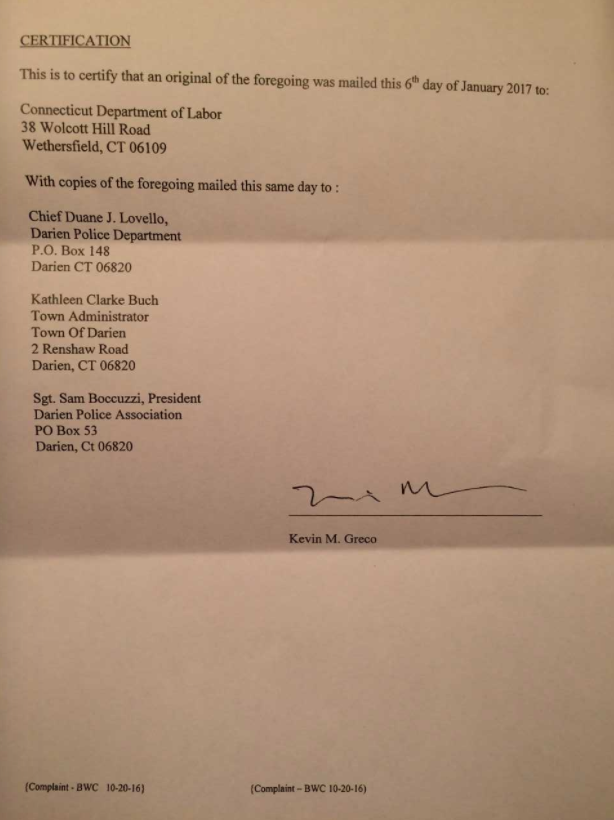