Darien Police Chief Duane Lovello spoke to the Board of Selectmen on Monday to again ask for body cameras for police, and the board unanimously granted the request. Here’s Lovello’s prepared statement: 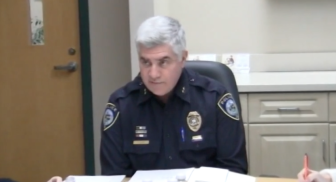 Good evening. Thank you for allowing me to come before you this evening to once again discuss funding for a body camera program for the Police Department.

As you know, a request for funding for such a program in the approximate amount of $87,000 was submitted during budget presentations for the fiscal year which just started on July 1.

That request was not funded. The thoughtful nature of the comments made by some members of the board in denying the request were not at all lost on me; among these were the evolving nature of the technology associated with body cameras and a general absence of complaints against the Darien Police Department that might otherwise highlight the need for the program.

Darien TV79 announced it will have a full video of the Board of Selectman meeting posted on the Internet by Tuesday.

I fully understand these thoughts and I also acknowledge that it may be considered poor form for a department head to request, so early into the fiscal year, funding for a program only recently denied. However, much has changed over just the past several months that brings me here this evening.

The first incident involved an interaction between an African-American gentleman on a bicycle and a Darien police officer.

Footage recorded by this person of this interaction was posted to social media as evidence of racial profiling when in fact it was part of an area canvass related to a recently reported burglary.

The second involved an officer and a motor vehicle operator being approached by an uninvolved third person during a traffic stop. This uninvolved person informed the officer that she wanted to ensure the safety of the operator from the officer.

‘The Landscape Has Changed’

While these examples pale in comparison to the tragedies we see broadcast on a far too frequent basis, I do think they serve to illustrate that the landscape has changed and police departments, citizens, and communities are much better served, and public confidence in the police reinforced, when a community implements a body camera program.

The ubiquitous nature of smartphones and social media has provided an almost immediate platform for a person to broadcast footage of police activity whenever and wherever it occurs.

A well-trained and professional police organization, such as the Darien Police Department, should not fear and would not hinder this recording activity from taking place, an activity protected under the Connecticut General Statutes.

What is usually lacking, though, is a complete context in which the activity takes place. In other words, much of the video filmed by private citizens does not begin until that person becomes aware that something is occurring, either through physical confrontation or raised voices and the like.

The interactions leading up to a confrontation or altercation are usually not depicted. Oftentimes, the person recording such an interaction will provide commentary with no base of knowledge as to what occurred prior that brought police on scene initially. It is here that a police officer, equipped with a body camera, can provide the most complete, albeit not perfect, record as to what actually occurred, start to finish.

The heightened state of tension that now exists surrounding law enforcement has reached a level not seen in my 34 years as a police officer. We have seen some horrible footage of police misconduct occurring from other parts of the country.

I am thankful to work in a state that counts its municipal police officers as among the most highly trained in the country — that is not an observation, that is a fact. I am not suggesting that Connecticut will be immune from these incidents but Connecticut remains well ahead of most other states in police training.

However, a hallmark of any profession is a willingness to hold its work out for public scrutiny. The Darien Police Department, an accredited police agency, would like to increase its already high level of transparency by implementing a body camera program.

Sustaining the program in years two, three, four, and five would be approximately $68,500 per year, the vast majority of which relates to data storage. It appears that the State of Connecticut may provide 100 percent reimbursement for first year funding through a grant process should the Town wish to pursue that opportunity.

Additionally, Public Act 15-4 required, among other things, that the Police Officer Standards and Training Council adopt a statewide model policy regarding the use of body cameras.

This policy has been published and the Darien Police Department has a draft policy in process that aligns with the model policy. Additionally, I believe this request aligns with the goals and objectives set by this board of supporting law enforcement initiatives that foster respectful community relations.

With the support of the Darien Police Commission, I respectfully request that the Board of Selectmen approve funding in the amount of $87,000 for implementation of a body camera program. Thank you.

Darienite.com often presents full texts of speeches, announcements and other documents when we think they are clearly presented, not too long and worth our readers’ time to see in full. We do not change wording or remove wording unless that’s noted somewhere on the page. We do make other, minor changes to reflect our editorial style (for instance, we changed “thirty-four years” to “34 years”), and we break up paragraphs and add subheadings.