Patricia Parlette, a lifelong Darien resident and former member of the United States Cadet Nurse Corps, will serve as the Grand Marshal of the 2019 Darien Memorial Day Parade. 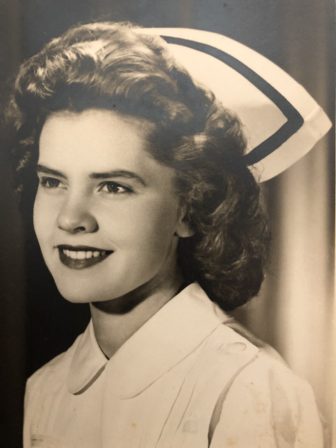 In the 1943 Memorial Day Parade, Pat led the Darien High School Band as the first female Drum Major, so serving as the 2019 Grand Marshal brings her full circle to the Parade 76 years later.

Pat graduated from Darien High School in 1943, and from Greenwich Hospital as a registered nurse in 1946. Part of her training as a student nurse was spent at Yale where she learned special care for polio victims living in iron lungs.

Although her father, Oliver served in WWI, Pat was personally introduced to the military when she worked at the Tripler Military Hospital in Hawaii caring for polio patients. Pat is always curious about everything and aware of the big picture, traits she credits to her mother.

— You can watch the parade and ceremony ONLINE, starting at 10 a.m., here.

A bill was introduced by then Congresswoman, Frances Bolton (R-Ohio) on March 29, 1943, calling for the establishment of a government program to provide grants to schools of nursing, to facilitate the training of nurses to serve in the armed forces, government and civilian hospitals, health agencies, and in war related industries.

The Bolton Act established the United States Cadet Nurse Corps, and was passed unanimously by both houses of Congress and became law on July 1, 1943, and Pat was in the first class to graduate. 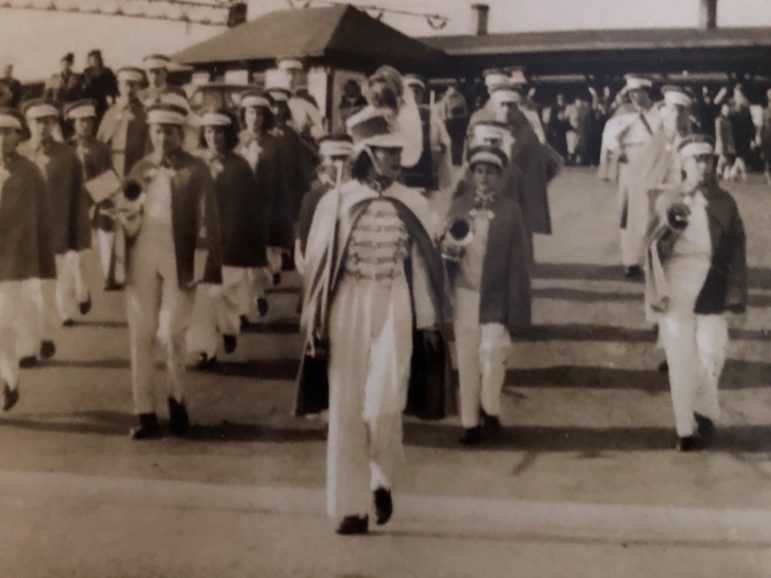 Pat Parlette at Darien Railroad Station, which she’s expected to be rolling past in a car during the parade. In the 1943 Memorial Day Parade, Pat led the Darien High School Band as the first female Drum Major, so serving as the 2019 Grand Marshal brings her full circle to the Parade 76 years later.

In April 2019, U.S. Sen. Steve Daines, along with senators Elizabeth Warren, Susan Collins, and Angus King, introduced bipartisan legislation to honor the women who served in the United States Cadet Nurse Corps during World War II with honorary veteran status. If passed, this bill would credit service in the Cadet Nurse Corps between 1943 and 1948 as active military service for the purpose of attaining status as a veteran.

Pat was hired by Seaboard Airlines, and wore her white nurse’s uniform because at the time, the Military Air Transport System (MATS) contracted with civilian airlines and required the presence of a registered nurse on flights. These assignments took her to military bases all over the world especially Japan, Vietnam, and Europe. Her airline career lasted 38 years. Her last flight was in a C-47 at a veterans’ reunion in Westerly, R.I. in 1995.

In 2008, Pat was honored by the Darien Old Timers’ Athletic Association with the Community Civic Award. This award is given for “regular participation in community civic service of constant loyalty, unquestioned integrity, peerless leadership and sense of fair play,” and “exceptional service to others in the finest American tradition. Darien’s Monuments and Ceremonies Commission can attest to Pat’s patriotism as she regularly attends and participates in ceremonies to honor veterans, and the victims of 9/11.

Pat is a tireless volunteer, giving her time to the Darien Thrift Shop, the Darien Book Aid, and to the New Covenant House. She is a faithful member of St John’s R. C. Church. Pat has traveled the world, walking on the Great Wall of China, riding in a home-built seaplane with George Jacoban, taking a zip line ride over the Treadline Mine in Alaska, and visiting Egypt, Vietnam and Jordan.

In 2013, Pat was invited by her dear friend Col. Gail “Hal” Halvorsen, also known as “the candy bomber” to attend the 65th anniversary of the Berlin Airlift in Frankfurt, Germany. Halvorsen, 97 a World War II veteran started dropping candy when he was a U.S. pilot for the Allied forces during the Berlin Airlift. In 1948, the Russians cut off food and supplies to West Berlin, Germany, and the United States and its allies started airdropping packages filled with flour, milk, meat and even coal to the starving city. Halvorsen shared hope and joy with the children by dropping candy-filled parachutes made out of handkerchiefs which contained part of his chocolate rations. Years later, Pat spoke to the children at Holmes School in Darien about her experiences with the “candy bomber,” and noted that “Mercedes and the Chocolate Pilot” is a best-selling children’s book written about Halvorsen.

Pat remains a positive force in the community and is always ready to absorb new ideas and information. Pat lives the spirit of the adage, “there are no strangers in the world, just friends you haven’t met yet.” And although her heart has always been in Darien, Pat says her favorite spot is “where ever I am.” On May 27, 2019, that spot will be leading the Darien Memorial Day Parade.