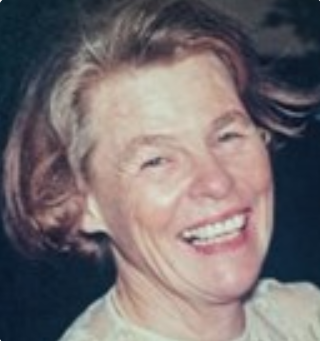 A daughter of Eileen and Ralph Tyner, she was a lifelong resident of Old Greenwich. She attended the Grey Court School and graduated from Vassar College in 1944. She worked as an editor at Time Life magazine until she married James Anderson III, also of Old Greenwich.

She was active in town affairs for many years.

A founder of the Greenwich Arts Council in 1972, she initiated and served as project director of Sculpture ’76, the Arts Council’s Bicentennial project, which brought to Greenwich fifteen monumental outdoor sculptures by America’s leading artists, including Alexander Calder, Willem de Kooning, Claus Oldenburg, and George Rickey. Two sculptures from the exhibition were acquired for permanent installation: George Segal’s Girl Standing in Nature in Bruce Park, and Lila Katzen’s Priapos in Roger Sherman Baldwin Park.

— This obituary previously was published by Greenwich Time.

She also served as director of Sculpture 350, celebrating the 350th anniversary of Greenwich with a gift to the town of Deborah Butterfield’s two bronze horses, which are standing in Bruce Park.

A trustee of the Greenwich Library and a longtime member of the Friends of Greenwich Library, she organized the Library’s Art Gallery committee, providing information on artists and exhibits for the public.

She was a member of the Greenwich Representative Town Meeting for 12 years, serving as secretary of District Six and the Education Committee, a member of the boards of the Old Greenwich-Riverside Community Center and the Greenwich League of Women Voters, and a teacher for Stamford Head Start and the First Congregational Church Sunday School. She also volunteered at Darien Book Aid.

Lydia was an active alumna of Vassar College, serving as co-chairman of her 25th and 60th reunions, editor of her 50th reunion Book, and class president. She was also a freelance writer and the author of four books of nonfiction for children.

She was bridge life master and an avid traveler — Lydia loved being by the water, at her home in Old Greenwich, the Riverside Yacht Club, and the Hillsboro Club in Florida.

A memorial service will be held at 10:30 a.m., Saturday, Sept. 1 at the First Congregational Church in Old Greenwich.

In lieu of flowers, contributions may be made to Darien Book Aid Plan, or Vassar College.