Janet Louise Martella, a longtime Darien resident, passed peacefully on Oct. 4, 2018 at the age of 90. 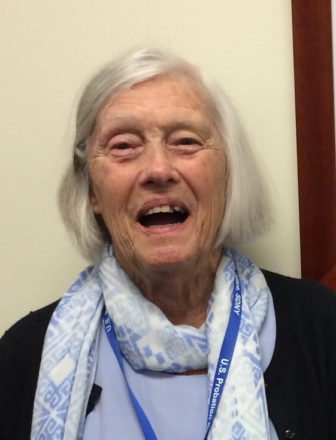 Janet was born on March 9, 1928 in Larchmont, N.Y., the daughter of Helen Daly Werring Winkler and Frederick H. Werring. Her grandfather was Major George A. Daly, a decorated war hero in World War I who created and was the first sworn officer of the Federal probation system in 1927.

Janet graduated from Rye High School in Rye, N.Y., where she was a core member of the field hockey team. She loved spending time at Rye Beach and Playland with her friends, and both became links to her childhood that she joyously shared with her children and grandchildren.

Janet married Robert A. (Bob) Martella 69 years ago on Aug. 27, 1949, and they spent their first year living at Tusculum College in Tennessee, where Bob was attending school on the GI Bill. After subsequently living in Rye and Yorktown Heights they settled in Darien in 1972.

With five children, Janet spent much of her time as a homemaker and mother, but true to character she was also avidly involved in community and charity work. She was a Girl Scout leader, Boy Scout den mother, elementary school assistant and volunteered at the Darien Sport Shop Charity Soup Kitchen.

Her real passion and pride however was her work with Pegasus Therapeutic Riding, a program that uses horses and horse riding activities to enhance the lives of individuals with disabilities. She was program director and a volunteer with the organization for over 30 years.

Janet is survived by her husband, Bob; her children: Robert (Linda), Suzanne, Barbara Morehouse (Hank), Karen and Charles (Ariadna). She was a proud grandmother of Lauren, Evan, Leal, Diego and Sofia. She was pre-deceased by her parents and brother Frederick (Fred).

Janet was a loving wife, mother and grandmother and was happiest spending time with her family. She was deeply cherished by her family and friends; her warm smile, her effortless grace and her selfless character will be sorely missed.

The family would like to thank Darien EMS Post 53, the nurses and doctors at Stamford Hospital 9th floor Cardiology Unit, Visiting Angels of Stamford and Waveny Home Care.