A happy outlook, a loving wife, a good night’s sleep and a little Scotch. Those were the key ingredients to a long life according to Fred I. Smith who passed-away peacefully at the home he shared with his wife Marny in Easthampton, Massachusetts, on Aug. 22. 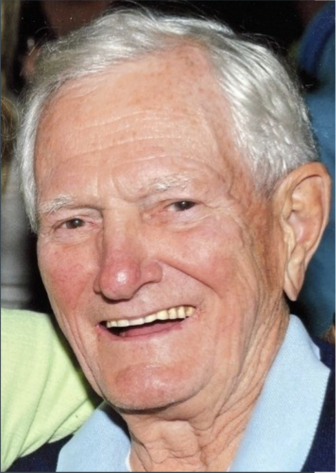 Fred Inman Smith III was 98 years old and had lived an amazingly full and happy life. He was a resident of Darien and Norwalk for over 50 years, where he was an active member of the Darien Senior Men’s Club and the Silvermine Golf Club, a volunteer at Person to Person and SCORE, and a cherished member of every community he lived in from Tokeneke to Rowayton. Fred’s ready smile, humor, and upbeat approach to life will be missed by all who knew him.

Fred was born in 1924 in Plainsville, New Jersey. A natural athelete, Fred excelled at track and field. After moving to Cincinnati with his family, he became the Ohio State champ in high hurdles.

In 1943, Fred was drafted and enrolled in an air cadet training program with the U.S. Air Force. He trained to fly a B-24 Bomber, but was able to avoid front line combat because of his speed and skill playing on the air base’s football and track teams. He was fond of saying “sports saved my life.”

After World War II ended, Fred planned to go to college under the G.I. Bill. He called upon the legendary Ohio State University track and field coach Larry Snyder (Jesse Owens’ coach) who remembered Fred’s State Championship win and was able to get him accepted to OSU the following day.

In 1958, Fred married Carole Foeller (Littlefield) and had two sons. In 1965, the couple hired architect Richard Meier to design a country home for them in Tokeneke. The resulting “Smith House” has become an architectural landmark, winning numerous awards over the years. Carole and Fred divorced in 1971.

In 1976, Fred married Marny Bryan and the couple moved to a home in Darien. After Fred retired in the early 1990s, he and Marny moved to Rowayton where Fred continued to golf, bowl and socialize into his nineties. In 2019, Fred and Marny moved to Easthampton, Massachusetts.

Fred is survived by his wife Marny, his two sons, Chuck and Hobie; three grandchildren, Zen, Ki, and Sei; five step-children, Ed, Jennifer, Jim, John, and Shep Bryan; 12 step-grandchildren, and three step-great-grandchildren. He was adored by his entire family.

— This obituary was published by the Darien Times on Legacy.com where online condolences may be left.

Editor’s note: For more on Smith House, sometimes called the “Frederick J. Smith House,” here are some photographs, an article describing the house, and a Wikipedia article.