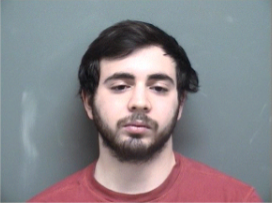 A 21-year-old man previously arrested in a domestic dispute was arrested again last week after pushing a member of his household to get that person out of the way in a hallway, Darien police said.

The other person wasn’t injured or bruised, but the push violated a protective order, police said. After the Monday incident was reported to police on Darien police applied for and received an arrest warrant by  Thursday, April 6, and that day arrested the man, Joseph Pulvirenti Jr. of McCrae Lane.

Police gave this additional information, including accusations not proven in court:

The protective order against Pulvirenti forbids him from “assaulting” or “abusing” the protected persons, among other prohibitions, and pushing can count as a kind of assault under Connecticut law, although Pulvirenti wasn’t charged with assault itself.

Instead, Pulvirenti was charged with disorderly conduct (a misdemeanor) and violation of a protective order (a felony), and the arrest warrant set his bond at $10,000. According to the Connecticut Judicial Branch website, Pulvirenti had not made bond and was still in jail as of early Tuesday morning, April 11.

On Thursday, police saw Pulvirenti in a parked vehicle in the area of 20 West Ave. and police had him leave the car, then placed him under arrest. He was scheduled to appear in state Superior Court in Stamford the next day. His next appearance is on April 20.

In August 2016, Pulvirenti was charged with driving while intoxicated and, the next day, charged in connection with a domestic dispute at his home on McCrae Lane.