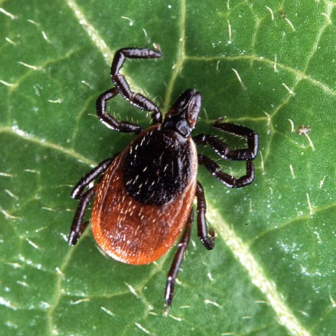 Photo by Scott Bauer for U.S. Department of Agriculture

The high Darien percentage was the case with the 20 ticks sent to the laboratory at the state agricultural experiment station in 2017 up to Easter (April 16). The rate has stayed the same — out of a total of 30 ticks tested so far this year, 14 (47 percent) have tested positive for Lyme.

Any Darien resident can bring a tick to the town Health Department for testing. Only ticks found on people (not pets) are sent to the state laboratory, town Health Director David Knauf says.

Deer ticks — the ones that transmit Lyme disease — need to be on the body for 24 hours and must be engorged with blood (indicating tick contact with the blood still in a person) for people to get Lyme disease from them, according to the state Department of Public Health.

Darien is waiting for another 26 results from the 36 ticks sent in for testing since Easter (most within the last two weeks), Knauf said on Thursday.

“They’re running behind — about two weeks or more — for results,” Knauf said. That’s because so many ticks have been sent in from across the state for testing. “It used to be a week.”

Dr. Theodore Andreadis, director of the Connecticut Agriculture Experiment Station, has this advice about avoiding Lyme disease, according to a Hartford Courant article, emphasizing checking your body for ticks [boldface emphasis added]:

He urged Connecticut residents who go walking or hiking in wooded and brushy areas to check themselves for ticks immediately after returning. He also warned that most insect repellants “aren’t very effective against ticks” and that the only way to spot tiny deer ticks is a close examination of the skin. Showering or bathing won’t rid a person of a tick if one is attached to the skin, he added.

Andreadis said people should take particular care to check behind their knees, arm pits and the base of their scalps— spots where ticks can often go unnoticed.

Not all well-informed experts about preventing Lyme disease agree on all points, and sometimes they may emphasize different aspects of prevention.

For instance, Darien Health Department notes (below, put in boldface near the bottom of this article) that a Yale University study found the risk of contracting Lyme disease can be reduced by 58 percent by bathing soon after being outside in a tick-infected area.

That doesn’t necessarily contradict what Andreadis said above that bathing “won’t rid a person of a tick if one is attached to the skin.”

According to the federal government’s Centers for Disease Control: 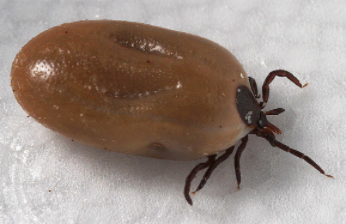 Ixodes scapularis tick engorged with blood. This species is the tick that transmits Lyme disease in Connecticut.

Most humans are infected through the bites of immature ticks called nymphs. Nymphs are tiny (less than 2 mm) and difficult to see; they feed during the spring and summer months.

Adult ticks can also transmit Lyme disease bacteria, but they are much larger and are more likely to be discovered and removed before they have had time to transmit the bacteria.

Adult Ixodes ticks are most active during the cooler months of the year.

How to Avoid Lyme Disease

Experts Expect a Lot of Ticks this Year!

The black legged or deer tick (Iodes scapularis) is well known for spreading Lyme disease. Now, after a very mild winter, there are reports of a large number of ticks, all looking for a blood meal, possibly from you! Here are some tips and things to know to protect yourself and your family:

Residents can bring ticks taken from themselves or family members (no dog ticks please!) to the Health Department office where they will submitted and tested for the bacteria that cause Lyme Disease. While waiting for the results, watch for any of the following symptoms of Lyme Disease:

 Enlarging often “bull’s eye” rash at the original site of the bite; reddish on light skin, bruised looking on darker skin. About 50 percent of light skinned adults get a rash and some get multiple rashes. Joint swelling or pain may also occur. If any of the above symptoms occur, notify your physician. Also, you must be aware of the fact that symptoms of Lyme Disease can vary between patients so it is important that your physician be aware of your activities and potential exposure to ticks.

 A tick must be attached to the skin for at least 24 hours to become completely engorged which also is the minimum amount of time it takes for disease transmission to occur.

 Ticks are second only to mosquitoes as transmitters of infectious agents to humans. The longer an infective tick is permitted to feed, the greater chances of transmitting the infection.

 Ticks are external bloodsucking parasites that feed on humans or other mammals. They are entirely dependent on blood or tissue fluids for life.

 A tick seeks a blood meal by climbing onto vegetation and using its forelegs to feel and grab onto a host. They are found from ground level to about three feet above. Carbon dioxide, scent, body heat and other stimuli attract ticks to a host.

 When ticks feed they cut the skin with their mouthparts, insert their mouth into the wound, use their teeth to cut the blood vessels under the skin (causing the blood to pool), inject anti-clotting agents, and suck the victim’s blood.

These techniques will help reduce your chance of infection due to a tick bite: 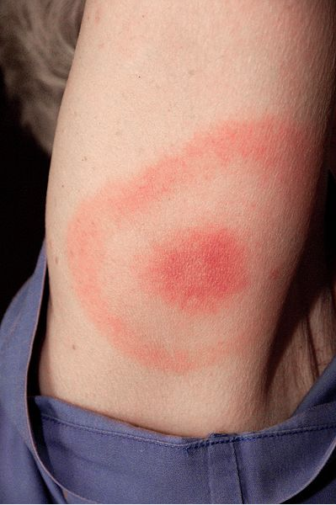 Photo from U.S. Department of Agriculture, via Wikipedia

A “bullseye” sore. If you get Lyme disease, you’re lucky to spot this, because you can then get to a doctor immediately for treatment. Not all cases of Lyme disease come with this kind of sore, left after a tick bite.

 Conduct frequent tick checks. This includes a visual inspection of the clothing and exposed skin, followed by a naked, full body examination in private. Look and feel all over your skin and scalp for new bumps.

 Avoid tick-infested areas wherever possible. Stay on established paths and try not to brush against bushes where ticks may be waiting for you and their next meal.

 Wear light colored clothing. This makes it easier to spot ticks on your clothing.

 Wear long-sleeved shirt and long trousers. This will reduce the skin area exposed to ticks.

 Tuck your shirt into your trousers and your trouser legs into your socks. This keeps the ticks on the outside of your clothing as they crawl upward.

 Use an EPA-approved tick repellent.

 Avoid sitting on the ground.

 Ticks can get on your pets so check them regularly, especially around the ears and eyes.

 Take a shower and wash your hair as soon as you enter your home.

Taking the following actions will reduce but not eliminate the number of ticks on your property:

 Ticks are susceptible to dehydration. You can reduce humidity by: pruning trees, clearing brush, removing litter, mowing grass and allowing grass to dry between watering. Also, move the stubby overgrowth between the lawn and the woods farther back from areas frequented by people and pets.

 Modify your property so it is less attractive to animals that are hosts to ticks by: eliminating bird feeders and baths, salt licks, erecting fences, clearing away wood, brush or leaf piles and removing stone walls.

 Directly kill ticks that live on the property by applying acaricides (tick-killing pesticides). Follow the directions carefully as these are toxic. Better still, use an exterminator.

 Modify outdoor areas by widening trails and moving play areas to safer places away from brush and shrubbery.

 Using fine pointed tweezers, grasp the tick’s head as close to the patient’s skin as is possible and apply steady, gentle upward pressure until the tick releases its hold. Do not yank! Part of the head may remain embedded in the skin. Put the tick into a small plastic sandwich type bag and bring it to the Darien Health Dept. for testing. Wash the bite site and the tweezers with suitable antiseptic. Notify your physician.

 Children should be told to seek adult help for tick removal. It is safer to wait and remove it properly than to pull it off with your fingers. Mouthparts may remain embedded in the skin.

 Do not prick, crush or burn the tick, as it may cause the release of infected tick fluid.

 Do not try to smother the tick (e.g. petroleum jelly, nail polish) as the tick has enough oxygen to complete the feeding.

The Health Department accepts ticks and submits them to the Connecticut Agricultural Experiment Station (CAES) for testing. Because of the continued widespread concern and the serious health implications from Lyme Disease, this office maintains constant surveillance and offers the following:

 Only those ticks removed from humans are tested for Borrelia burgdorferi, the causative agent of Lyme Disease – the lab does not test Dog Ticks or other ticks found on pets.

 In order for a tick carrying Lyme Disease to infect an individual, it must be attached to a human for at least 24 hours and be fully “engorged” with human blood.

 The lab will only test ticks that have been engorged.

 If the tick was not engorged, Lyme Disease transmission did not occur and the tick will not be tested.

 So far in 2017, 20 ticks have been tested and half of those have been found to be positive. This is consistent with findings across the state for this year.

 Testing done through CAES is free with the results available and provided by email usually within a few days. Some ways to reduce your risk to Lyme Disease:

 A recent study performed at Yale noted that the risk of contracting Lyme Disease is reduced by as much as 58% if one bathed or showered within two (2) hours of being outside in tick infested areas (which is just about anywhere there is underbrush).

 Repellants, especially ones containing at least 30% DEET, have been shown to be effective for approximately three (3) hours after application.

 Reduce brush areas at the perimeter of yards, perhaps by installing a gravel walkway where the lawn meets the woods.

 Rodents, especially mice, are major carriers of ticks so you should minimize potential harborage areas such as wood and brush piles.

 Other approaches such as yard treatments with pesticides or wearing various types of protective clothing is available but we all know how difficult it is to wear long sleeves and tuck long pants into boots when hiking or working in the garden in the summer. Vigilance is the best defense.

 Free tick removal kits are available at the Health Department office in the Darien Town Hall. If you submit a tick and it is found to be negative or it is not tested by the lab for any reason, you are not at risk for contracting Lyme Disease from that tick.