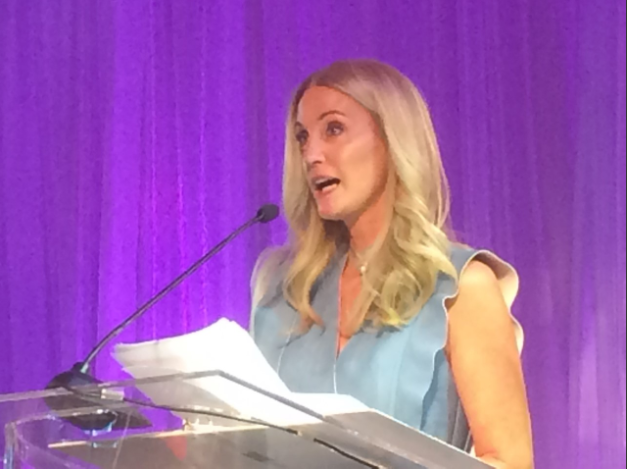 Vessels said in an earlier news release from the GLA that she put her fashion business on hold to care for her son when he went from “being a happy and energetic 12-year old to someone completely sidelined by this disease.”

Vessel, one of the event chairs at the Global Lyme Alliance‘s “Greenwich Gala” on Saturday night, reminded them all why they were there. She spoke about how her son getting Lyme disease at age 12 changed his life and the lives of his parents.

“If I was a high school student suffering from Lyme disease and was writing a college essay for admissions, the title would be ‘Sidelined,'” the Darien mother said. “This is what happened to our very healthy, happy, energetic, 12-year-old son, Chase, almost seven years ago.” 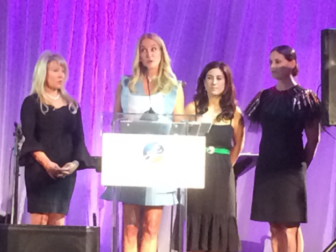 When Vessels spoke, the other three chairs of the event stood by her, including Robyn Carpenter, at left, also from Darien.

Vessels went on to describe the family’s ongoing search for treatment and the difficulties Lyme disease put in her son’s path.

Other speakers at the event, held at the Hyatt Regency in Greenwich, included Blumenthal, who mentioned that last year he had gotten additional federal funding for Lyme disease research and was trying to get more this year.

Carlson, who filed a sexual harassment lawsuit with Fox News last year and received a settlement reportedly in the tens of millions of dollars, also briefly recounted her experience getting Lyme disease. Scott Santarella, the CEO of the Global Lyme Alliance, also spoke.

At a silent auction held before the dinner, the items up for bid included golf outings at the Country Club of Darien and Wee Burn Golf Club in Darien. The swag bags available to guests at the end included a card for a complimentary class at the Bar Method Darien (which posted a photo on Facebook showing some of its customers at the event).

Here’s the rest of what Vessels said (followed by excerpts of Carlson’s and Santarella’s comments):

It started with an enflamed knee after playing outside, and a trip to the pediatrician’s office, where two doctors thought it was a possible staph infection. We rushed him to the emergency room, where two infectious disease doctors diagnosed it as a ruptured bursa sac. 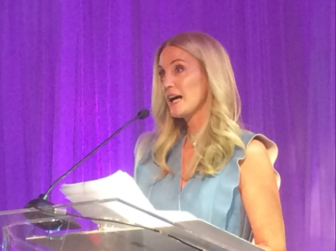 Vessels said in an earlier news release from the GLA that she put her fashion business on hold to care for her son when he went from “being a happy and energetic 12-year old to someone completely sidelined by this disease.”

If only they would have suspected Lyme, which can present in this way and is clearly very endemic in our area, and given us three weeks of antibiotics, our journey would be very different from the nightmare that we have endured over the past seven years.

Our son started getting sick monthly with the same symptoms that kept him home in bed for days. We consulted with several doctors in different states and basically chased our tails for over a year looking for a diagnosis.

We pushed for a Lyme test, which at this point we had suspected. It came back negative by CDC standards. At this point, our son was in the eighth grade and could no longer attend school on a regular basis. Further testing for Lyme and co-infections finally revealed that he was positive. 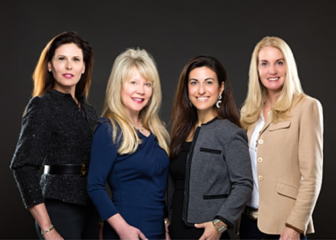 We were so relieved to have that diagnosis, but we had no idea of the exhausting journey that we were about to embark on — the mountain we would climb in search of treatment that would give him his prior life back.

We had hoped and assumed that we would get proper medical treatment, but we quickly found out that Lyme is a do-it-yourself disease. We continued to see several specialists who all contradicted each other. The medical denial of this disease was so painful as we watched our son’s health deteriorate.

He went from being a good student who lost his love of reading. His once-sharp math skills were now weak as he experienced cognitive limitations. He was a good athlete. He had played hockey and lacrosse competitively since he was old enough to hold a stick. He played both sports year-round and loved being part of a team. He loved the camaraderie that it provided.

These past years we have had endless tests, and have desperately tried many treatments oral antibiotics, bicillin shots, IV hydrogen peroxide, IV ozone therapy, reikishi, herbal treatments. We bought an infrared sauna — which he doesn’t get in — even though my husband did install speakers. 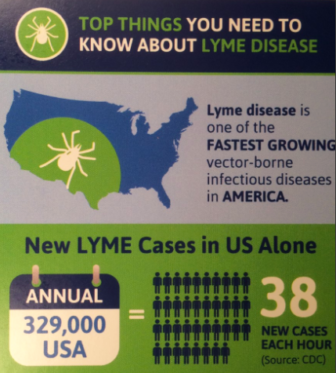 A move to California for three months for alternative treatment. Autologous stem cell in Germany, quartz stem cell in Panama, [another treatment] for the past four months, more oral antibiotics and a football field of supplements, and I would be remiss not to mention I did speak with a healer from Arizona who was perched on a red rock, and when things settle down, I think I want to circle back to that guy, because I want to apply for that job.

We were fortunate enough to have the resources to explore the different treatment options, but what about the sufferers that don’t? Insurance companies cut you off, usually after 28 days in the majority of cases. And it is a tragedy that people, and especially children in the prime of their lives who are left to suffer. 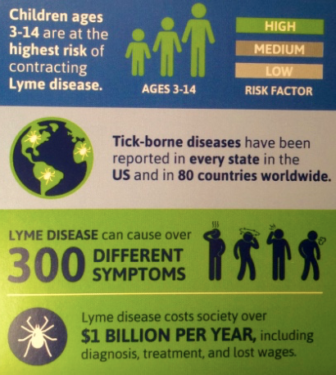 Youth should be a time of exploration and joy, but these kids are out of school, they’re isolated from their peers. They lose the person they once were, and the dreams and the goals that they once had, and there is a real fear for their future.

Even the most resilient warrior can feel like giving up. This disease completely wears you down

I was recently at a stop sign in my neighborhood behind a school bus, and I saw the kids climbing off with their backpacks and I thought, “Wow, it’s the simple things you take for granted. Being able to go to school full-time would be a dream come true.” 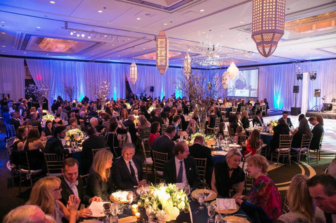 This is about half of the crowd that Vessels spoke to about her family’s experience with Lyme disease.

We feel fortunate that we found an open-minded and caring Lyme doctor who is working with us on different protocols as we continue to climb the mountain of healing. The hope is that the CDC Infectious Disease, insurance companies and doctors can all finally come together and help us battle this insidious disease.

The people in this room are the people that are trying to make the change.

Global Lyme Alliance is changing the landscape by working to fund the research to find the answers, and this will lead to the proper treatment so that Lyme sufferers can get back to living the lives that they deserve to live.

I feel very honored and I feel very, very privileged to be part of this organization. 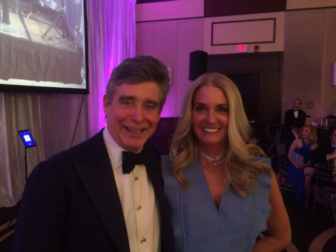 Novelist Jay McInerny, one of the honorary event chairs for the gala, approached Vessels after she spoke to thank her.

This past fall as the mother of a sick child, I wasn’t in a good place. The women of GLA lifted me up and gave me the strength to go home, put on my big girl pants and fight for the injustice of this disease. There is light ahead for all those who are suffering and that light is the research that will result in effective treatments, and we will not give up until we find the answers.

Lyme disease is incredibly important to me, and that’s why I volunteer my time to this organization. I’m so glad to be back this year, so thank you for having me. It’s important to me because I’m a Lyme disease survivor. Five years ago I got a bullseye rash, right here on my forearm. 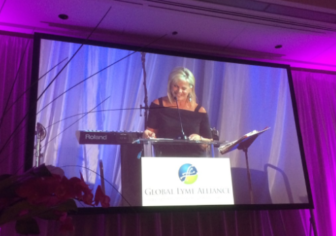 Unfortunately, when I went to a particular doctor, there was not the immediate diagnosis of Lyme. In fact, I had been traveling in Ecuador, and the diagnosis was ringworm. That was incredibly unfortunate for me because had I been treated at that time, I would have never, probably, gotten full-blown Lyme disease, but instead, six weeks later, I became incredibly ill.

It was actually another doctor who was doing an interview with me on my TV show at the time who said to me, ‘You know, you really don’t look like yourself.'”

“I said, ‘You know, I really don’t feel like myself.’ And I proceeded to tell him in a commercial break, ‘You know, I had this rash —’

And he immediately stopped me, and he said, ‘What did it look like?’ 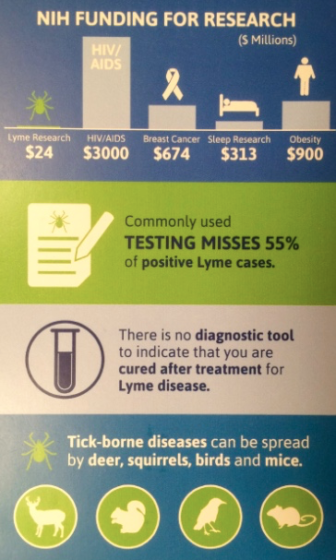 And luckily, I still had a picture of it on my phone, and he said to me, ‘Gretchen, you have Lyme disease.’

“Now here’s the second part of the problem. I went to get tested. And many of you in this room understand that the tests simply aren’t accurate. And so my tests were inconclusive, but luckily that physician started me on the drugs that day, and within seven to 10 days, I was feeling better, and they officially said to me, ‘You have lyme disease.’

“I’m one of the lucky ones, and I also like to knock on glass or wood by saying that I don’t have any symptoms of the chronic disease at this point. But so many other people are affected by this in such a serious way.

And without that reliable diagnostic test […] far too many people are not correctly diagnosed. They go on forever wondering what’s wrong with them. And that’s why the work of this alliance is so crucial, and especially for our kids.

I look at my kids every single day, 13 and 12, and hope that they’re not going to have to go through this.

So, through research and education — that’s why we’re here tonight. And you’re going to be blown away if you haven’t been here before, by the experts in this field and what they’re doing and the great strides that they’re making. […]

I have spent the last two decades leading organizations that help patients overcome the injustices associated with neglected, underfunded and stigmatized illnesses. And there is no bigger injustice in the infectious disease world than the injustice Lyme disease patients face every day: no definitive diagnostic test, limited treatment options and minimal government support. Thanks to your support, GLA is changing that!

Santarella also spoke about deciding to join the GLA last May as chief executive officer:

I was immediately drawn to their tireless commitment to changing the paradigm of Lyme disease through research, awareness and education — in my experience, the three keys to success in beating disease.

The best way to prevent Lyme and other tick-borne diseases is to avoid areas where ticks live. This sounds like a simple solution but turns out to be an impractical one, especially for those of us who love the great outdoors. Here are some practical ways you can reduce your risk of being bitten by a tick.

BE AWARE OF YOUR SURROUNDINGS

Correction: An earlier version of this article said that Scott Santarella joined the Global Lyme Alliance two years ago. In fact, he joined last May.