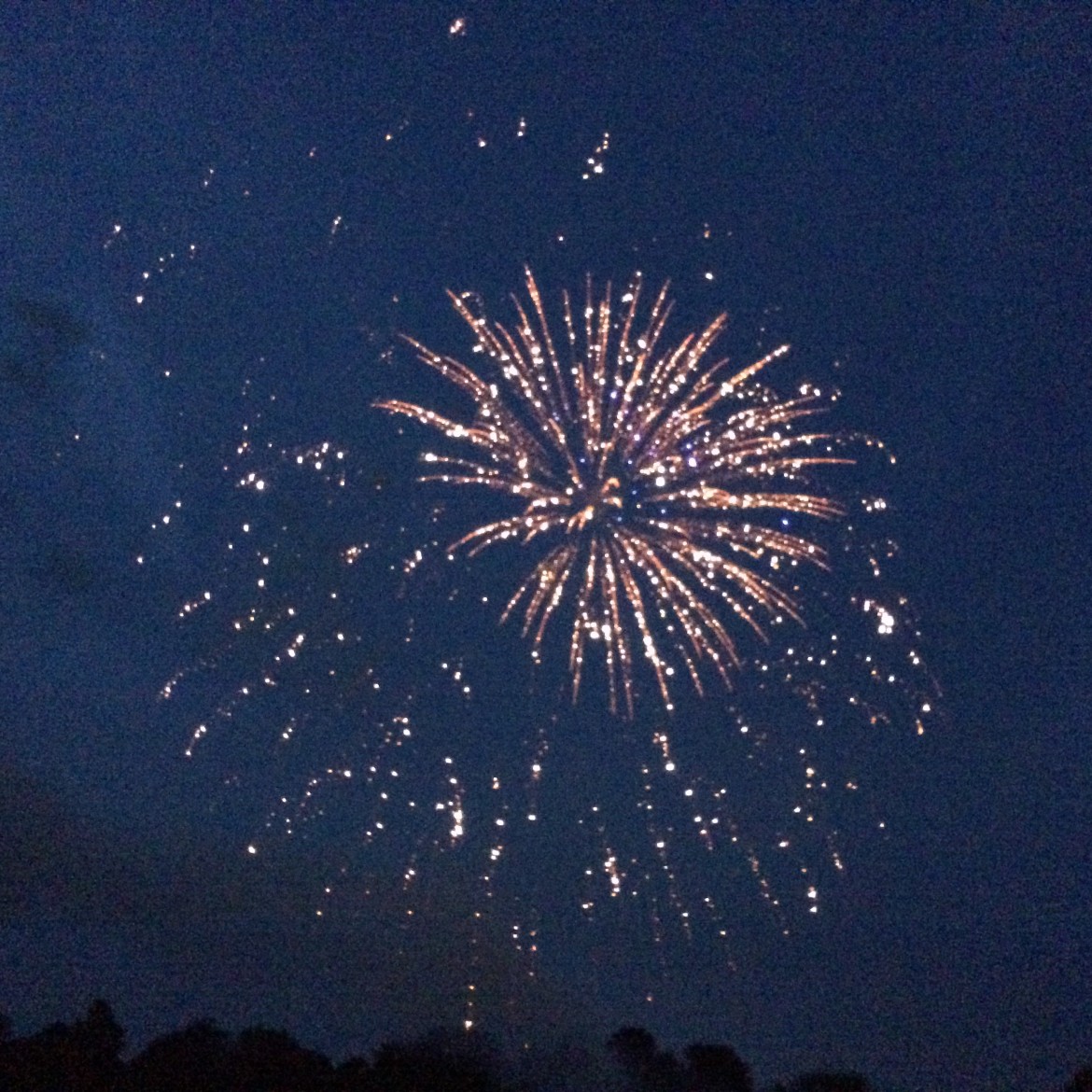 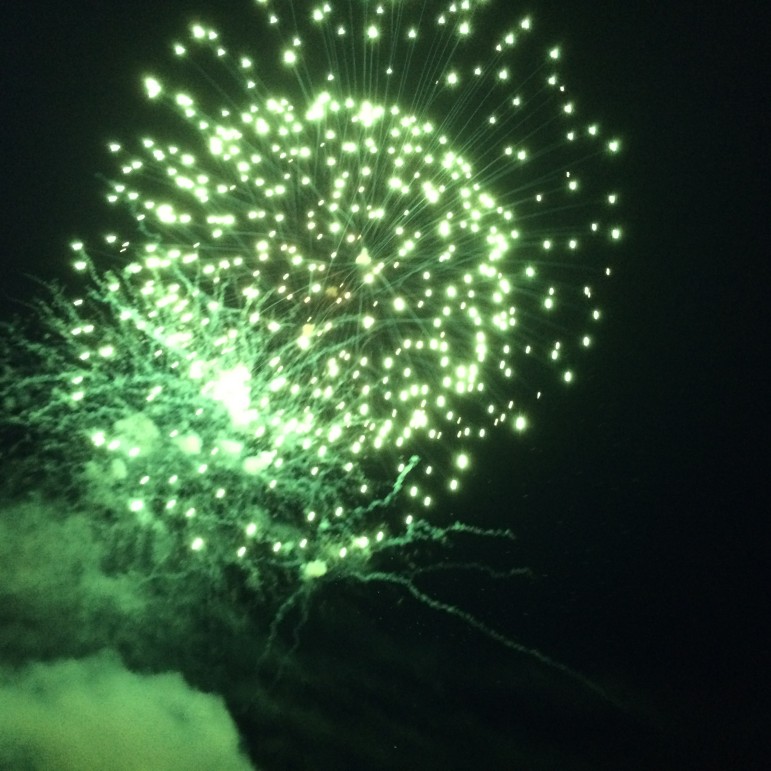 Part of the fireworks display. (We admit it — Darienite's photos of the fireworks themselves are TERRIBLE. If you took pictures there, email them to dave@darienite.com — they have to be an improvement on this!) 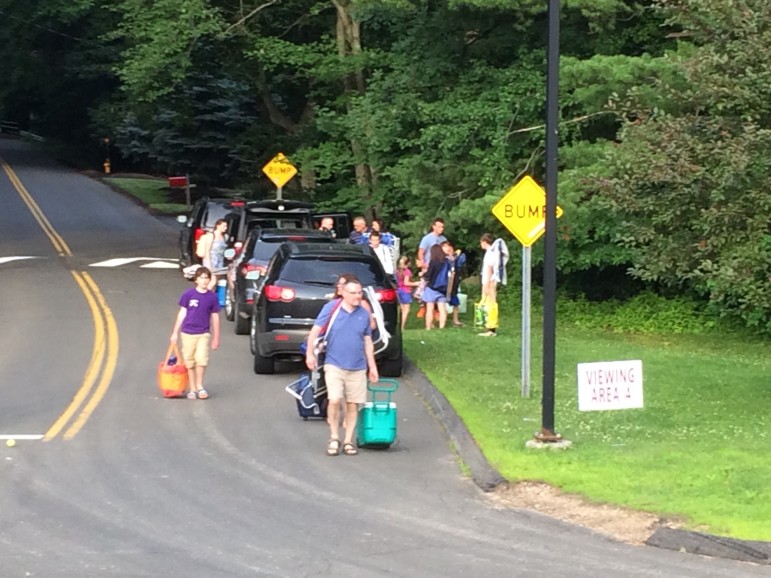 Darien Police Officer Kate Gelineau (pronounced "JELL-in-oh") at the last intersection on Noroton Avenue before Darien High School. Gelineau is also the school resource officer for Tokeneke Elementary School). A total of 35 police officers were on duty at the fireworks.

From left: Sara Franzese and Susan Marks, two of the organizers of this year's event. Sales of parking passes were "slow in the beginning — then they went like hotcakes," Marks said. The 250 available were sold out by noon on Thursday, she said.

From left: Caroline, Julie (almost 3 years old) and Gregory Verpoorten of Darien; Thomas and Tesse Vervenne of New York City. The four adults are natives of Belgium, where the national holiday is celebrated later this month — also with fireworks.

Stephanie Broadhurst, Side A. Her father, Rick, said he comes to the fireworks "for the kids, the wife," and because he likes them. For his wife's response to that, see the next caption.

Stephanie Broadhurst, Side B (painted side). Her mother, Rick's wife, says, "I came here for you and Stephanie. I do not like fireworks!" (Painting by HoneyBunchFacePainting.com)

Marion Ryan, who's birthday is on July 4; her husband, Steve (both former Darien residents now living in Greenwich); their grandson, Liam Seibold; his mother, Marion Seibold; Dominic Seibold and Bill Seibold (reading "Who Built That" by Michelle Malkin). "The whole nation celebrates her birthday," Liam quipped about his grandmother's birth date.

Joe Criscuolo, owner of Meatball & Co. and his wife, Caterina, ran one of the food booths at the event. The beef tomato meatball parmesan was the most popular meatball at the event, he said. And did you catch that job title on his shirt? If not, see the next photo.

Yes, Joe Criscuolo is a Meatball Executive. It's official. It's right there on his shirt.

From left: Aric Wu, Guliya Wu and Cody Wu. They happen to be standing near the bleachers — which First Selectman Jayme Stevens recommends as the best spot to watch the fireworks (specifically, right by the press box). It was an excellent spot to watch them from.

From left, Paul, Ronan, Allison and Kaitlyn Murray. "We come here every year," Paul Murray said. After a hiatus of years, fireworks resumed at the high school in 2011 and have been going strong ever since.

They call the game "Headbands," but we think it's more popularly known by another name. From left: Claire Borecki, Ursula Patel, Mariana Seibold (facing away), Michael Borecki and Katherine Du. (Yes, Mariana is the granddaughter of Marion Ryan and the daugher of Marion Seibold, who we came across several pictures back.)

First Selectman Jayme Stevenson and Selectman Susan Marks. Stevenson said the celebration, which had been cancelled for a number of years after the high school was built (due to concerns about the fields) was brought back with help particularly from David Campbell, David Genovese, Susan Cameron and Dot Kelly.

Part of the crowd. It's only a guesstimate, D.P.D. Chief Duane Lovello said, but there seem to be between 3,500 and 5,000 spectators at a typical Darien fireworks display.

Thomas Blackmon of Meriden shows one of the more popular glow sticks he was selling at the event — a wand with a snowflake at the end (made popular by the movie "Frozen"). After sunset, with some of his glow sticks glowing, he walked through the crowds and sold quite a few, of all types.

Four members of Post 53 Darien EMS were among those on-hand for emergencies (from left): Justin Plank, Nicole Santella, Gray Kline and Carl Hunter. (And if you think that getting to ride around in that golf cart-like vehicle would be cool, remember that it must pale in comparison to an ambulance.) 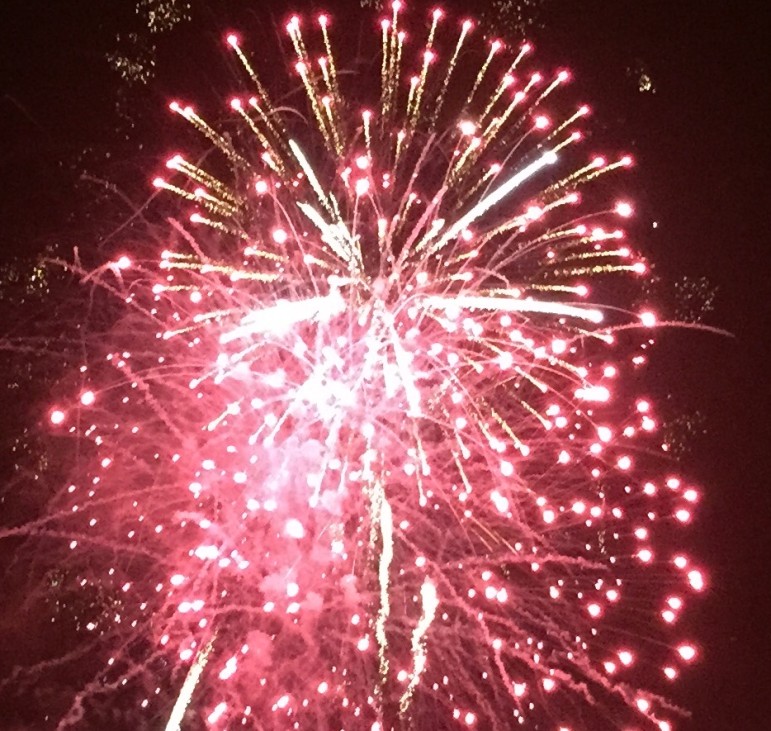 Thank you Penny Spanos for this photo from Friday night's fireworks!

Rockets glared and bombs burst in the air Friday night at the town’s Independence Day fireworks display, the main attraction of a celebration in which thousands gathered outside Darien High School.

See also: Here’s How Darien Rolls on the Fourth of July

[This article was updated early Saturday morning with the addition of the last two pictures.]

3 thoughts on “Darien Fireworks in the Air, Big Picnic on the Ground”