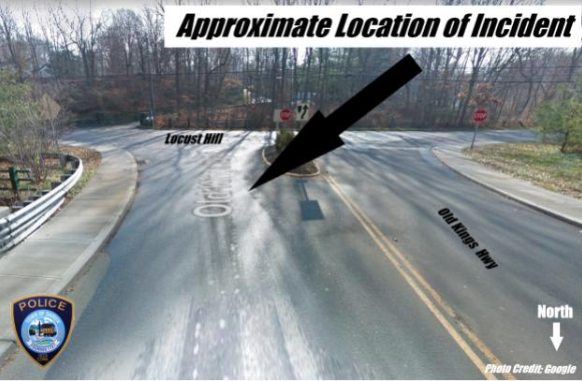 This image showing the intersection was released on Friday.

A 14-year-old boy was knocked off his bicycle when it was struck by a vehicle, resulting in the boy getting a broken bone and bruises Thursday morning on Old Kings Highway South near its intersection with Locust Hill Road.

The dark-colored car left the scene without stopping, and police are asking that anyone with information about the matter to get in touch with them.

In an announcement Friday morning, police provided these further details:

At about 8:50 a.m., the boy was riding his bicycle on Old Kings Highway South toward Locust Hill Road. He crossed from the west to the east side of the street as he approached the intersection.

This image showing the intersection was released on Friday.

At the same time, a vehicle traveling west on Locust Hill Road turned right onto Old Kings Highway South. The car struck the rear tire of the boy’s bike, which knocked him to the ground.

The vehicle, described as a dark-colored sedan with a hatchback, possibly a BMW, continued traveling north on Old Kings Highway South.

The boy was taken to Stamford Hospital, where he was treated for his bruises and the broken bone.

“We are asking anyone that may have been in the area at the above date and time to contact us if they witnessed anything regarding this incident,” police said in a news release. ” Please call 203-662-5300 and reference case #2019-009140.”