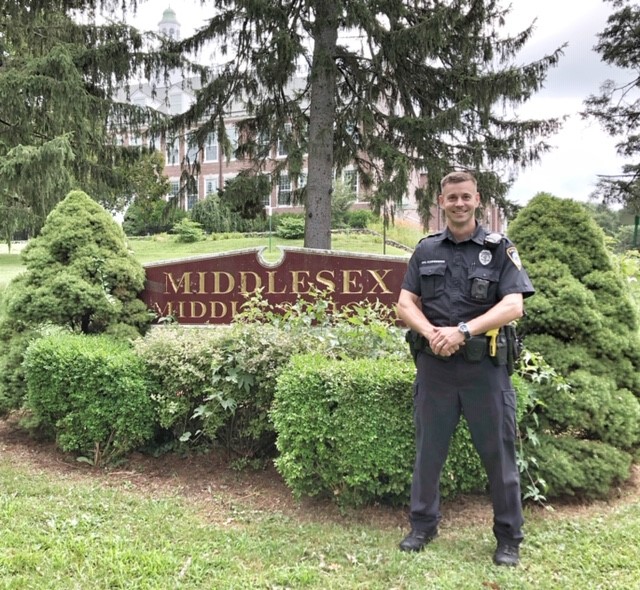 Over the summer Schwengerer will be attending training through the National Association of School Resource Officers.  He will begin his assignment at Middlesex Middle School in late August.

“The Darien Police Commission and I are very pleased with the selection of Officer Stu Schwengerer as the first SRO at Middlesex Middle School,” Police Chief Raymond Osborne said in a news release. “His previous training and experience, along with his positive attitude, make him a great choice for this position and I am excited to endorse him.”

Schwengerer has 18 years of law enforcement experience, most of which have been with the Darien police. Previously assigned to the Patrol Division, Schwengerer served in the United States Marine Corps and has an associate’s degree from Gateway Community College in New Haven.

“The SRO program at Darien High School has been very successful for seven years now and I expect the same results at Middlesex. Congratulations to Officer Schwengerer,” Osborne said.

Schwengerer is a field training officer, a firearms/patrol rifle instructor, and a member of numerous specialized units including the Marine Division, Honor Guard and the Southwest Regional Emergency Response Team.

School district officials agreed to creation of the S.R.O position in Middlesex Middle School after extensive discussions with Police Department officials, who proposed it.

“The district is appreciative of the community’s support for adding a school resource officer at Middlesex Middle School,” Darien’s new superintendent of schools, Dr. Alan Addley, said in the same news release. “We congratulate Officer Schwengerer on his appointment and look forward to him joining the school in the fall as part of our ongoing efforts to provide a safe and nurturing learning environment for our middle school students.”

Police were able to provide an officer to fill the SRO position after the Board of Selectmen and other town officials agreed earlier this year to hire civilian dispatchers, freeing up police officers from dispatching duties. Along with the SRO position, police have been able to assign an officer to work with other law enforcement agencies in the area on drug-crime investigations.

“Building on the tremendous success of the SRO program initiated in 2011 at the Darien High School, the Board of Selectmen has long supported the placement of an SRO at Middlesex Middle School,” First Selectman Jayme Stevenson said in the same news release.

The news release from the Police Department added: “We would like to congratulate Officer Schwengerer on his appointment to this position, and we look forward to strengthening current relationships with Middlesex School staff and cultivating new relationships with the student body.”