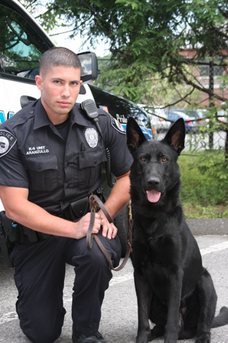 Zulu, Darien Police Department’s first police dog, is the last dog from his training class still at work, and he’s expected to retire by the end of the year.

Darien Police K-9 Unit: Officer Nicholas Aranzullo, the K-9 handler, and K-9 Zulu, who is expected to be retired by the end of this year.

“We think a Lab would be a better fit,” Lovello told the Police Commission at its last meeting, Aug. 10. “Most of the work we’re seeing right now is narcotics related. This would be a narcotics dog.”

Labrador Retrievers also tend to be more easy going than German Shepherds, which can be very protective of their owners. “From a public relations standpoint, you could more easily bring the Lab into a public event than you can Zulu,” Lovello said, “so there’s that added benefit.”

Zulu has worked out so well in the department since he came aboard in 2009, that police definitely want to continue having a K-9 on the force, Lovello said. Darien does get a lot of cooperation from other nearby departments if Zulu isn’t available for a particular incident, Lt. Robert Shreders told the commission. When Darien asked for help recently, it took a Norwalk K-9 unit only 15 minutes to get to the scene in Darien, he said.

Lovello said that “particularly with the opioid crisis we’re seeing in town” a second K-9 for the department is an idea he may suggest to the board in the near future.

The commission unanimously approved a proposal to spend $9,500 on getting a new dog and training it. All of the money used for Darien’s K-9 dog program comes from the False Alarm Fund, which had $43,500 in it before the expenditure approved for the new dog.

By state statute, police dog handlers get a set stipend to pay for training. Food and other incidental costs to maintain a dog comes out of the department’s False Alarm Fund.

A member of the Norwalk police force runs a training academy for police dogs and provides the dogs. An attempt is made to match compatible dogs with the police officers who will work with them, and Darien may send two officers to the academy to get one dog and explore the possibility of another, Lovello said.

Labradors are not generally trained for tracking, as Zulu is, the chief said.

Zulu lives with his handler, Officer Nicholas Aranzullo, and will continue to do so after retirement.