Drivers need to steer clear of deer beginning this month, the start of deer mating season in Connecticut, when more deer traverse wooded areas along the state’s roadways at twilight.

Of that number, 32 resulted in fatal injuries on statewide roads, the most since 2011. 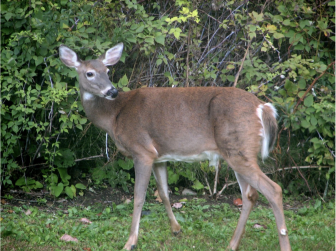 Don’t crash into Bambi! Or her mother!

The repository also reports 73% of deer crashes generally occurred outside daylight hours, especially around sunset, from 6 to 8 p.m. before the clock change; and from 5 to 7 p.m. when we switch to Standard Time on Nov. 6.

“Drivers need to be especially vigilant at dusk,” Mayko said. “Deer present dangers to you and to your vehicle so it behooves everyone to be prepared since such crashes can be costly, even deadly.”

In Connecticut, the highest number of reported strikes occurred in Groton (21); Bloomfield and Wallingford, 15; Farmington and Manchester 13, Simsbury, and Torrington, 12; Avon and Orange, 11; and Hamden, 10

To avoid a deer crash, AAA recommends these precautions:

—Scan the road ahead of you, including shoulders since deer can very well dash out from adjacent wooded areas.

—Be especially attentive in the early morning and evening hours, the prime commuting times.

—Be careful rounding curves and climbing hills where visibility is limited.

—One long blast on your horn may frighten animals away from your car if you spy them early enough.

—If you spot one deer, look out for others. Deer rarely travel alone.

—Use your high beams along dark roadways if there is no oncoming traffic.

—If you can’t avoid a collision and impact is imminent, brake firmly and try to remain in your lane. Swerving to avoid the animal may cause you to lose control of your vehicle and create a more serious crash.