A 59-year-old Darien man thought he was seducing a 14-year-old girl in an online chat app, but he was actually talking with a police detective, according to Greenwich police, who arrested him as part of an online undercover operation.

— This article is based on an account by Greenwich police as published by GreenwichFreePress.com (the original version can be found here). The accusations in this account have not been proven in court. 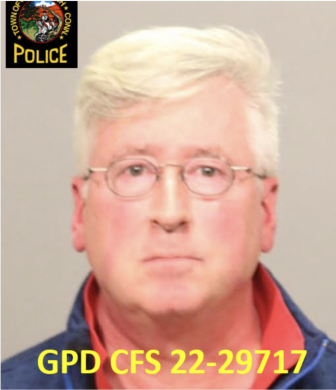 David Rewcastle, 59, of Darien, accused of trying to seduce a minor who turned out to be a Greenwich law enforcement officer.

Over the course of the investigation David Rewcastle began to steer the conversations toward becoming more sexually explicit in nature. He also began describing sex acts that he wanted to perform on the supposed girl “in real life.”

The investigation culminated with Rewcastle making plans to meet with the “girl” in person in a specific location in Greenwich to carry out these sexual acts.

On Friday, Sept 23, Rewcastle followed through with his plan and traveled to Greenwich. He was arrested without incident when he arrived at the pre-arranged location in the area of Loughlin Avenue in Cos Cob.

His bond was set at $150,000 and was scheduled to appear Sept. 26 in state Superior Court in Stamford. The Connecticut Judicial Branch website states that the file in the case has been “statutorily sealed.”

An online search results page on the website lists the next “activity/status” date (which usually means a court date for the defendant in a criminal case) as Nov. 21. But the web page includes no other information, such as whether Rewcastle was released on bail, whether the bail amount was changed or even if he appeared in court on Sept. 26.

The investigation was conducted by the Greenwich Police Special Victims Section.