Darien Commons has become the first of the town’s three major redevelopment projects to announce that it has started renting apartments to new residents.

Federal Realty Investment Trust, the owner of the multi-acre development across from Noroton Heights Railroad Station, says 58 homes are now available to rent — just over half of the 112 apartments that will eventually become available.

“Our first residents are now able to see our vision for this location — and are enjoying some of the conveniences and luxuries we have built in,” said Patrick McMahon, senior vice president, regional development for Federal Realty. 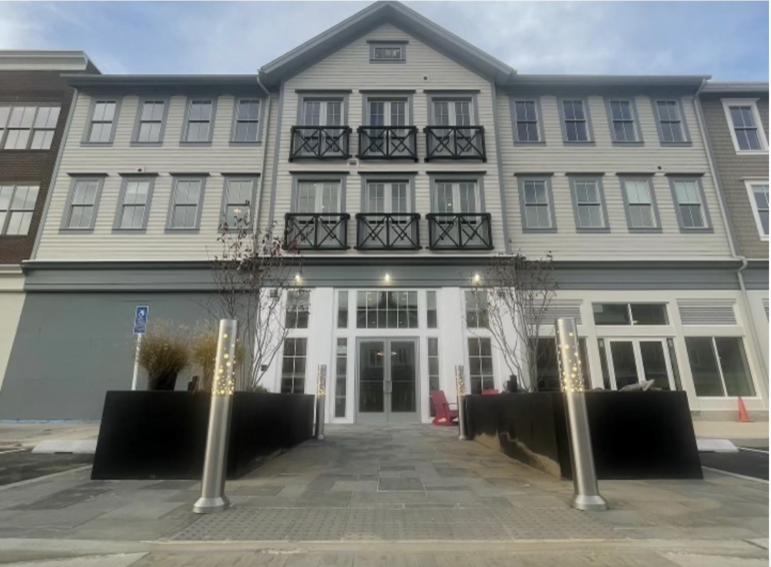 In its announcement, Federal Realty said new residents can enjoy such features of the property as a guest suite, a communal dining area with entertainment kitchen and beer tap, curated lending library “with everything from household items to an Xbox and electric scooters,” a landscaped courtyard with grills, a 24-hour fitness center and work-from-home spaces. Tenants have on-site surface parking and walking access to stores.

Federal Realty says it’s goal for Darien Commons is to have a “mix of national and local retail and dining options.”

OVME: This will be the first Connecticut location for this “bespoke selection of minimally invasive cosmetic services” and products for sale.

Federal Realty has an online rendering of the development here.

“As additional retailers come on-line, the benefits of living here will continue to expand creating a dynamic neighborhood,” McMahon said.

Retailers Still On-Site or Nearby

Walgreens previously moved from its old site to a 12,000-square-foot space in a new  building in the development, right next door, and buildings housing the Equinox gym (recently renovated) and Citibank remain where they were.

Other retail tenants and neighboring businesses that remain open on abutting properties include Chase Bank, Edward Jones, Vavala’s Deli, Sanda’s Cleaners, Dolce Nails, Leary’s Liquor Cabinet and TLC Hair Designs. Palmer’s Market and some other businesses remain open right across Edgerton Street, although the redevelopment project on the other side of the supermarket has been stalled.

Federal Realty owns and operates 105 properties for retail tenants mostly on the east and west coasts, in and around cities from Washington, D.C. to Boston as well as San Francisco and Los Angeles.

Founded in 1962, the company designs and builds urban, mixed-use neighborhoods combining shopping, dining, living and working spaces. The company says it rents space to about 3,100 business tenants in 25 million square feet, along with about 3,400 residential units.