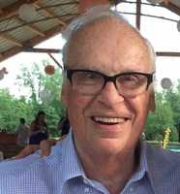 Bill was born in Brooklyn, N.Y. on Dec. 6, 1928, the son of William Curtis and Ruth Longenecker Glover. He was raised in Larchmont, N.Y. and graduated from Mamaroneck High School, Class of 1946. He went on to graduate from the Davenport College of Yale University in 1950, with a B.S. in chemical engineering.

Following college, Bill married the late Susan MacCallum and they had three children. The family moved to Fairfield in 1956, when Bill took over his father’s business, Write, Inc., in Bridgeport, which he ran until its sale in the late 1970s.

Bill married Barbara Hassler in December of 1979. They moved to Brush Island in Noroton in the late 1980s, buying the house Bill’s mother and father had built 30 years earlier. They lived on Brush Island for 17 years, where they hosted some legendary waterfront parties.

Throughout his life, Bill was involved with his local church, helping to found St. Timothy’s Episcopal in Fairfield. He was actively involved in community and national politics, including serving for a term as second selectman for Fairfield and running a re-election campaign for Christopher Shays in Darien.

Leisure activities included travel, gourmet cooking, boating, and tennis, and Bill had a love of architecture and construction, renovating a barn to make the family’s Fairfield home, and building several structures on property he had purchased in 1959 in Vermont.

After retirement, Bill and Barbara began splitting time between houses in Vermont and Arizona, and Bill pursued his interest in writing. He published a book on Yale Engineering, entitled “STEM at Yale: Up Down Up”, and a second book, “Francis of Assisi: His Legacy to our World”, that he completed just before his passing.

In addition to his wife, Barbara, Bill leaves two sons: William Robert (Linda) and John Somers (Mary Custis) Glover; a daughter: Cynthia Davison Glover; as well as stepsons: Brent Pat (Mary) and Glenn David (Linda) Bazzano; and a stepdaughter: Donna Jill Goldstein (Harris); and a multitude of grandchildren and great-grandchildren, to whom he was completely devoted. In addition to his first wife, Susan, he was predeceased by his parents, and his brother, John Curtis Glover.

A service in celebration of Bill’s life will be held at 10:30 a.m., Dec. 4 at St. Michael’s Episcopal Church in Brattleboro, Vt. Burial at King’s Cemetery in Marlboro immediately follows the service, then a reception at Blueberry Lodge.

In lieu of flowers, memorial contributions in Bill Glover’s name can be made to the Vermont Land Trust.