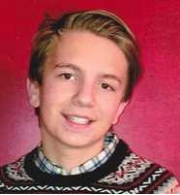 Born in New Brunswick, N.J., he was a resident of Cranbury his entire life.

Sean was a graduate of St. Paul’s School, class of 2017, and was, at the time of his passing, a freshman at Notre Dame High School.

He ran cross country and track at St. Paul’s School and enjoyed playing lacrosse, skiing and boating. An avid fan of music, he loved playing the guitar. Sean was very social, enjoying many friends.

In addition to his mother, Geri Genovese, of Cranbury, he is survived by his father, Kyle A. of Brielle, N.J.; a brother and sister, Christian L. and Bianca R.; maternal grandparents, Rocky and Geri Genovese; paternal grandparents, Rhoda Vogel, William and Chris Hanson; maternal aunt and uncle, David and Julie Genovese; paternal aunt and uncle, Michele and Mark Jones, Tristan and Stacy Vogel, and many cousins.

Burial will follow at Brainerd Cemetery, Cranbury. In lieu of flowers, donations can be made in Sean’s name to the Youth Mental Health Project.