Connecticut is investing $3 million in a new ad campaign to promote tourism in our state. But here’s a theme you won’t hear mentioned — yet.

“Whether you simply wander or plunge into the surf, cannabis can add pleasure to your beach visit.”

Such was the promise on a Mystic-based private tourism website, VisitNewEngland.com talking about Massachusetts beaches. But the site’s flowery pot prose also goes on to describe some of our tourism haunts that can be enhanced by marijuana. 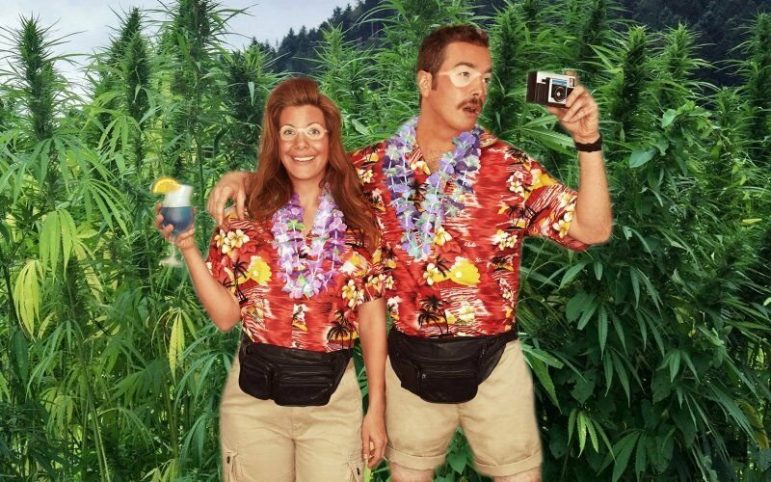 Oh-so-cool Connecticut pot smokers in the wilds of a nearby state.

“If you’re the type of weed smoker who loves to think deep, pondering thoughts about space and time, you’re in luck: Connecticut is home to some of the nation’s oldest historic houses, buildings, and towns.” According to state figures there are over 52,000 registered medical marijuana users in Connecticut. The estimates of how many “recreational” users are anyone’s guess.

Possession of cannabis in our state has been legal for almost a year now. Still, Connecticut is many months away from legal ‘recreational’ sales. So where do you buy it? You’ve got to hit the road.

Marijuana is a big business, estimated to account for $40 billion nationally by 2025. Some 35 states have legalized medical marijuana and 18 allow recreational sales. And tourism is riding cannabis’s coattails, already accounting for $17 billion this year.

Colorado, one of the first states to legalize cannabis, saw pre-pandemic hotel bookings jump 7% and room rates climb almost 4% when commercial sales began. In Denver you can book a bus tour to sample marijuana “tastings” and even visit a grow facility. Some tours feature cannabis-centric restaurants with food and marijuana pairings, like fine wines.

Closer to home there are 15 recreational marijuana dispensaries just across the border in Massachusetts, from Great Barrington to Springfield. Right off I-91 is the flagship Insa mega-dispensary, outfitted like a high end boutique with fancy display cases and lush green plantings.

After scoring your weed you’re just minutes away from the MGM Casino where they’ll welcome your business. Or later this summer, visit The Big E and satisfy your munchies after an edible.

New Jersey has just legalized recreational sales, but crossing any state line with even legal weed is still a violation of the law.

Wherever your marijuana meanderings take you, travel safe. Unfortunately, Amtrak is not a good alternative. Smoking is banned on all trains as is transporting even legal weed. And smoking while driving is just stupid, though enforcement is a problem for the police as there is, so far, no breathalyzer test for pot.

Connecticut is still many months away from licensing its first adult-only recreational dispensaries. But some 22 towns have already opted out of even allowing them, passing on the potentially lucrative local tax benefits. But if Connecticut marijuana consumers are willing to drive to Springfield, won’t they be happy to drive to a town next door offering legal sales?

When recreational sales of cannabis finally come to Connecticut, so too will the tourists and fresh tax revenues for the towns and cities permitting such sales