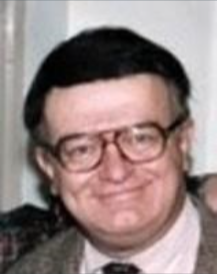 Born Oct. 26, 1933, to Walter L. Burrows, Sr., an antiques dealer, and Viola A. (Hallett) Burrows an artist and interior designer, in Barnstable, Massachusetts. Walter was predeceased by a sister, Natalie, in 2001.

The family moved to Darien early in Walter’s life. He attended high school in Stamford. His yearbook stated that he jumped from the sophomore to the senior class as an accelerated student and was a member of the varsity football team for two seasons as a standout guard.

In 1963, Walter passed the bar exam and became a lawyer, working first in the private sector and then for the City of Stamford. He also was a veteran of the armed forces, a member of the Noroton Volunteer Fire Department, an avid photographer, and an amateur magician, who performed mentalism in the mid-70s, as “The Baffling Burrows.”

Many knew Walter as “the guy with the camera,” always snapping photos at meetings and then giving away the prints to the members. He also enjoyed attending magic conventions.

Walter always enjoyed a good debate or discussion. A Civil War history buff, he gave talks on the subject at Wilton Meadows. He also spoke about great magicians and performers of the past, those whom he’d met or researched, staying involved in the magic clubs until his passing.

There will be a Broken Wand Ceremony performed at a later date with and for Walter’s friends as a memorial to Walter’s Life.