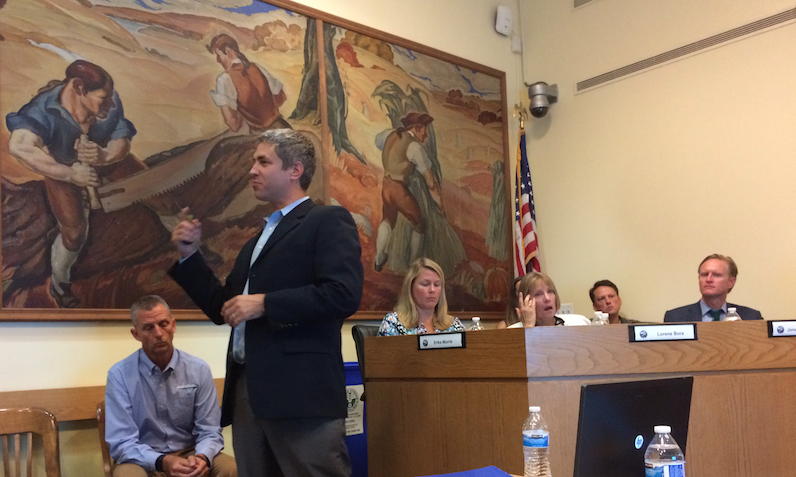 Daniel Biggs, a team leader from Weston & Sampson consultants, speaking at the Sept. 20 public hearing of the Parks and Recreation Commission. To his left, Art Thatcher, principal-in-charge for the GreenPlay LLC consulting team that worked on the project. Behind them: Open space in Darien, two to three centuries ago.

An outdoor pool at Cherry Lawn Park? Replacing two ball fields in front of Town Hall with an indoor pool and plenty of parking? Paddleboard courts at the Edgerton property?

Those were some of the dozens of ideas consultants briefly outlined in a draft Darien parks master plan proposing big or small changes for each of the town’s parks and some other properties, including the town’s Edgerton and Ox Ridge tracts.

The individual ideas for draft (not yet written) were described for about a half hour on Wednesday night, just before the first of two public hearings before the Parks and Recreation Commission. The next one is scheduled for Oct. 4.

The consultants — Daniel Biggs, team leader for Weston & Sampson, and Art Thatcher, principal-in-charge for GreenPlay LLC — said they were looking for feedback from the public in this and an upcoming public hearing, and they could change the proposals based on that and on ideas from the commission.

No information about costs have been developed by the consultants yet, but they said that’s coming at a later date. When it comes, the costs are likely to be in ranges, showing estimated minimum or maximum prices. The ideas themselves, described as “concepts” were given in very brief outlines by Biggs. Changes for some small parks were described only for about 30 seconds by Biggs.

A large proportion of the speakers in the public hearing were neighbors of Ox Ridge Hunt Club, who appear to be well-organized. Multiple supporters of the Darien Junior Sailing Team, a nonprofit organization that operates from Weed Beach Park, also spoke at the hearing. 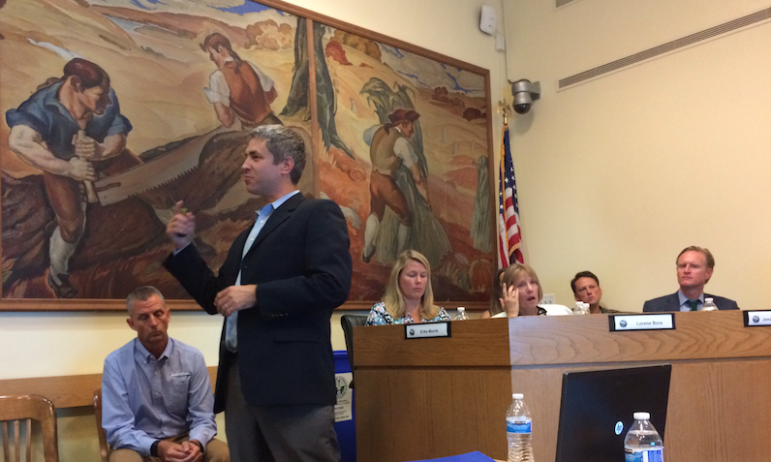 Daniel Biggs, a team leader from Weston & Sampson consultants, speaking at the Sept. 20 public hearing of the Parks and Recreation Commission. To his left, Art Thatcher, principal-in-charge for the GreenPlay LLC consulting team that worked on the project. Behind them: a depiction of open space in Darien, two to three centuries ago.

“Trails is one trend you’ll see in a lot of these plans to encourage access, encourage use within the park beyond the diamond or rectangular field use at these facilities,” Biggs said.

A plateau-like part of the parcel would take advange of the flat land to put in several paddle ball courts and a paddle ball hut, with parking around it for about 75 vehicles, Biggs said. 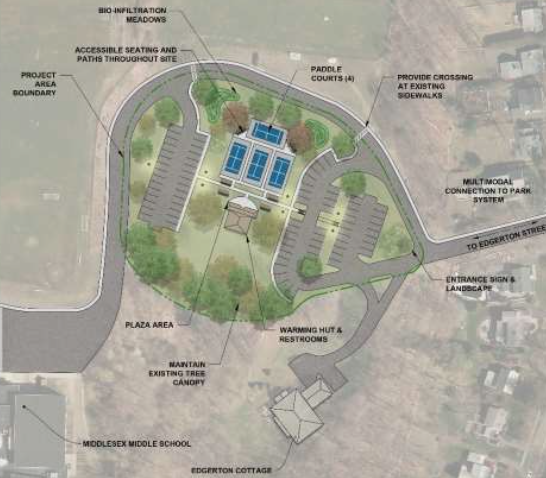 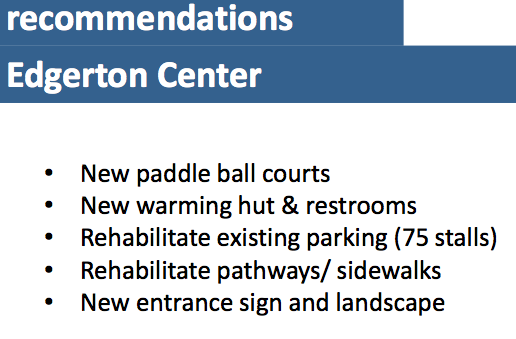 Image from the Weston & Sampson presentation on Sept. 20 permalink

“We looked at all the possible locations within the town […] that were possible for adding a pool facility,” Biggs said.

The consultants suggested three options for town pool facilities: An outdoor pool and “splash pool” (shallow and for young children) at either Weed Beach Park or Cherry Lawn Park (with additional parking nearby at each location) or an indoor pool with plenty of parking where two baseball/softball fields are now located off of Renshaw Road, between Town Hall and the Post Road. 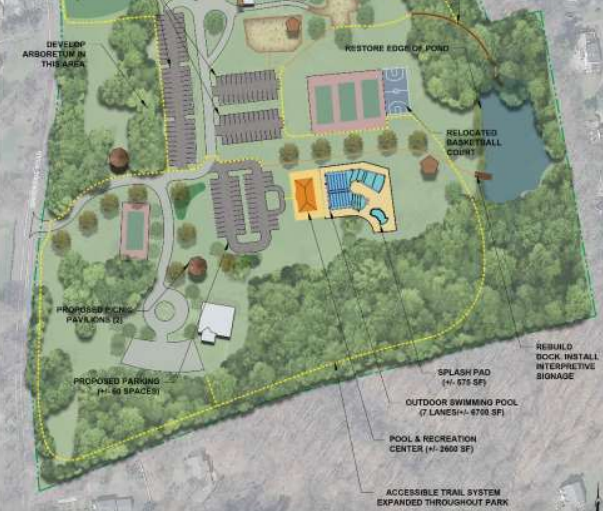 The Option B proposal for Cherry Lawn Park (This is the best available image.) 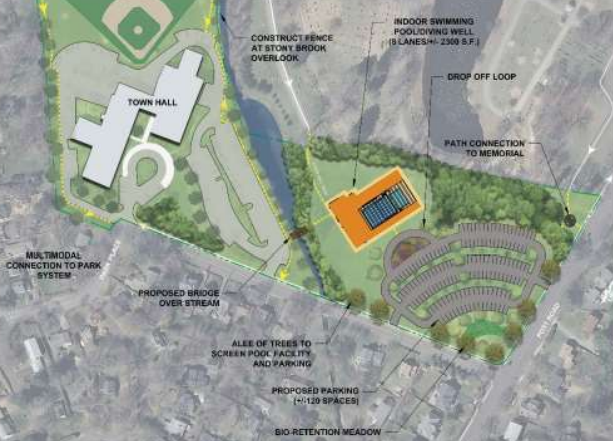 Part of an image from the Weston & Sampson presentation, Sept. 20. permalink

In the orange area on this map, a 2,300-square-foot "indoor swimming pool/diving well" building with an eight-lane pool would be located just west of a new, 120-space parking lot between Town Hall and the Post Road, on Renshaw Road. 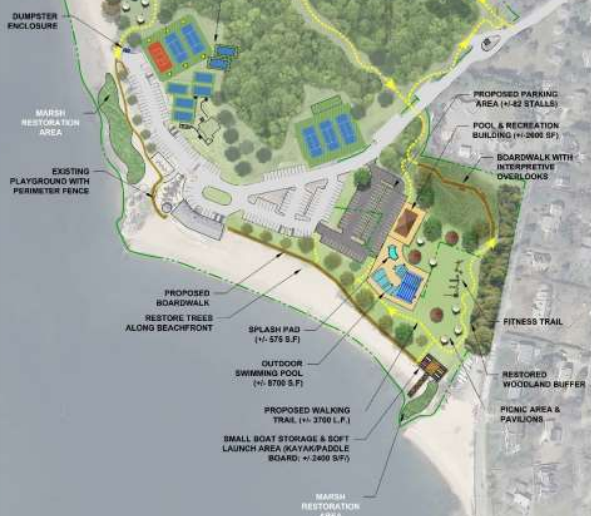 Part of an image from the Weston & Sampson presentation, Sept. 20. permalink

In Option B for Weed Beach, the consultants suggest an outdoor pool, a splash pad area and a pool house, along with an additional 82 spaces of parking nearby, near the southern end of the park.

For each location, the pools were included in one of the two options for the park.

The indoor pool off of Renshaw Road would be in a 2,300-square-foot structure located at about the point where the two current fields meet. A parking lot would be located on the end of the property closest to the Post Road. The map rendering of the idea showed a parking lot that looked a lot like the present baseball field.

When a member of the Parks and Recreation Commission asked whether anything would be done to replace the two ball fields that would be demolished to make way for the pool and new parking lot, Biggs said there were no plans for that.

Flynn, the commission chairman, then said:

“We did have quite a number of conversations with the youth sports leagues, and it was indicated to us that it’s possible that we might not need those [two ball fields]. So it’s something that we could look into.”

Biggs then added,  “We heard that they could be accommodated in different locations […]”

The Cherry Lawn Park Option B would have an outdoor pool, splash pad for young children and a “Pool & Recreation Center” building of about 2,600 square feet in the south-central part of the park. additional parking would be built just to the west (south of the present parking area). The pond can be seen to the right.

At Weed Beach, the pool facilities would be similar to those proposed at Cherry Lawn Park, with 82 spaces of additional parking nearby.

One person got up to speak specifically about the swimming pool proposals: Laurie Orman.

“I have lived in this town for 25 years, andI have been working on trying to find a location for an indoor pool for 22 of the 25 years,” she said. “This town definitely needs another indoor pool.”

Under Option A, a parking lot with 60 spaces (called “stalls” by the consultants) would be located near the northeast corner of the parcel (along with the same overflow lot, perhaps with gravel rather than pavement, would be just south of it, with about 30 spaces). A “bioretention field” for drainage from the parking lot would be near the northeast corner, and two new fields (one seemingly 150 by 240 feet, another 300 by 240 feet) could handle about 300 more cars.

Option B would include more parking areas than in Option A, with another parking area along the north side of the tract, close to the northwest corner. Trees would be planted around the entire perimeter and a third field, 300 by 240 feet, is shown in the proposal.

In this proposal, there would be a “comfort station” that essentially would be restrooms, and one not to exceed 1,000 square feet, as the town agreed when it bought the property. (A 1,000-square-foot structure could have dimensions, as an example not stated in the presentation, of 40 feet by 25 feet.)

A walking path around the perimeter of the property would be added, as well. 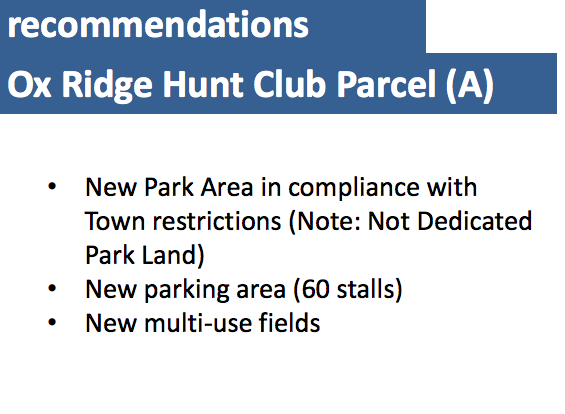 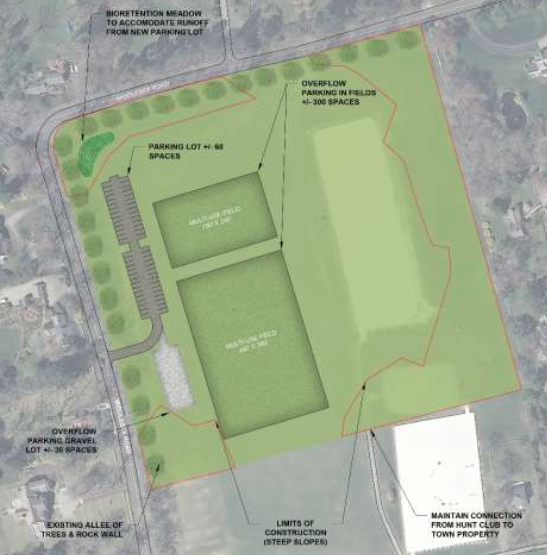 The alternative proposal, Option B, for the Ox Ridge property 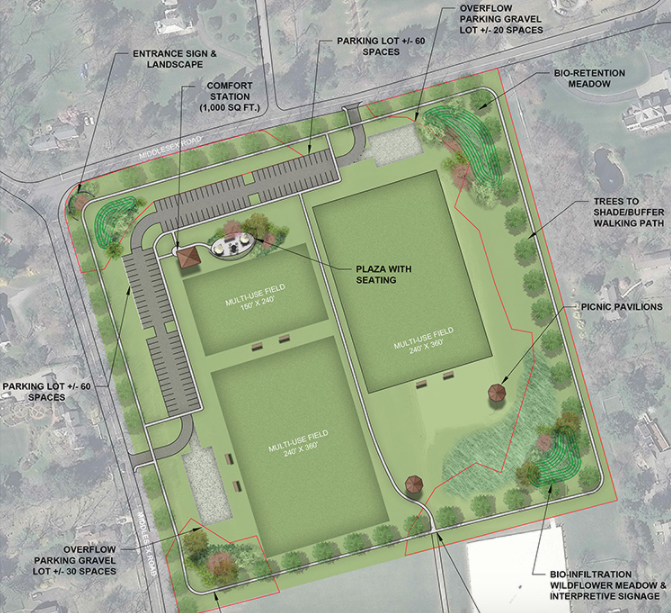 Option B for the Ox Ridge property

Lee Lee Klein said she represented about 40 or 50 neighbors of the Ox Ridge property. “[W]e built our homes next to a big field, and now there’s potential that will change, and so it’s probably one of the most sensitive topics in your master plan,” she said.

She likes the idea of having something welcoming for dogs in the park, and she suggested that if dog owners get upset by possible changes to the dog park at Cherry Lawn, they could come to Ox Ridge. Dogs and horses tend to get along well, she said, but not organized sports games and a lot of traffic.

“You’ve got to have quiet, passive recreation over there with, you know, dogs, people playing pick-up games on those fields, not organized games, picknicking […]”

Hank Wilson of Middlesex Road said the view of the field from nearby houses and from those driving by is an important feature of the property, so he opposed planting more trees along the edges that would disrupt the view.

“All of us as neighbors have experienced [it]. [,…] If you do [live near Ox Ridge] you know what that drive is like in the morning, sunrises, sunsets, the beauty of the place.”

He also said he was worried about seeing parking at the edges of the site and suggested that a lot be placed closer to the middle of the property, with trees surrounding the parking.

Rhett Drugge, another neighbor, said he agreed with Wilson on parking and not obstructing the view of the huge field. “That’s what open space looks like in Darien. […] It is iconic, and I think we have to strive harder” to do a better job of planning for the site.

Ox Ridge Hunt Club had shared some of its plans for changes at the part of the site the club still owns, including what it would do with some of the money it received from the town.

Drugge said he was doubtful the club would survive and suggested that in planning for the town-owned northern part of the site, town officials keep in mind that if the club goes defunct, the club’s buildings could be owned by the town. (He didn’t mention it, but that would include parking and restroom facilities, along with much else.)

Klein had a more optimistic view of the club’s future, calling its plans “very, very good.” But the club won’t survive if noisy, organized games are played at the town’s end of the site, along with a lot of traffic, all of which would give horses a bad reaction.

The second of two Parks and Recreation Commission public hearings on the draft proposals will be held Oct. 4 in the Auditorium of Darien Town Hall. 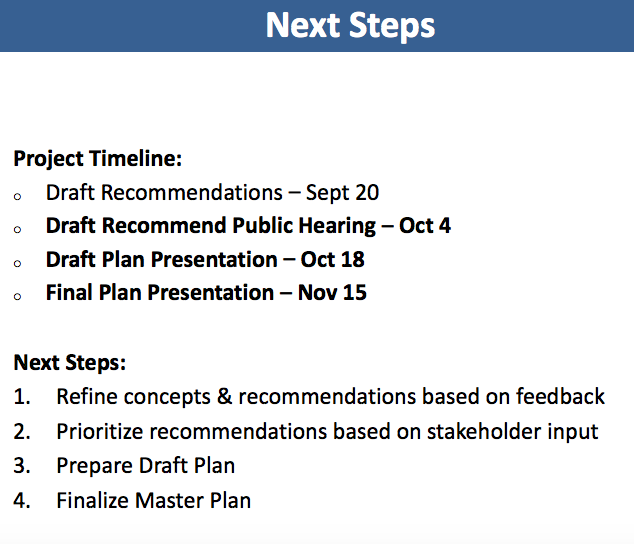 Image from the Weston & Sampson presentation on Sept. 20

The master plan, once voted on by the commission, would need further votes, including votes by the Board of Selectmen, Board of Finance and Representative Town Meeting, before any major changes are made to parks or recreation programs, although minor changes might not need approval from the RTM or Board of Finance.

Anyone with ideas or proposals for the master plan or questions about it is encouraged to email Parks and Recreation Director Pamela Gery at pgery@darienct.gov or Commission Chairman Mary Flynn at mflynn@darienct.gov.

To Find Out More

Many of the images in a set of slides presented by the consultants on Wednesday are posted on this Web page of the town government website, and the meeting was videotaped by Darien TV79.

Some of the maps in the online version of the slide presentation are blurry and hard to read. For those even more interested (or concerned) about ideas for particular parks, or who want an even better view of the maps, they are all on display now through Oct. 11 in the first-floor hallway of Darien Town Hall, open from 8:30 a.m. to 4:30 p.m., Monday through Friday.

See the whole public hearing in this Darien TV79 video: