The MTA, parent of Metro-North, did something rare last week: They told us the unvarnished truth.

Not that the Metropolitan Transportation Authority has outright lied to us before. Well, at least not very often. But they are the masters of obfuscation and garbled communication.

“Wear A Mask,” now part of their daily mantra. Any commuter can tell you the transit agency doesn’t follow its own rule, doesn’t issue tickets to offenders and even allows its conductors and transit cops to walk around unmasked. 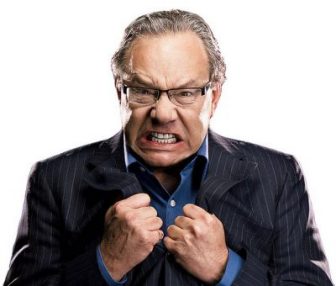 … and sometimes Lewis Black feels like the Jim Cameron of transportation …

“The train is delayed by operational issues.” That’s kind of redundant, isn’t it? It’s delayed because it isn’t operating. The question is why? Or my most recent favorite: “Ridership on Metro-North hits record levels.” Technically correct, but actually B.S. Weekday ridership has maxed out at only 63% of pre-COVID levels — a ‘record’ since 2020 but hardly a real record.

All of this seems like the agency is communicating with its customers, but it isn’t. And we all know it, which just adds to our cynicism. Sometimes I feel like the Lewis Black of transportation.

But then, last week, something amazing: They told us the truth. The MTA admitted it made some big mistakes and is in real financial trouble. They are running out of money and are heading toward a fiscal cliff. 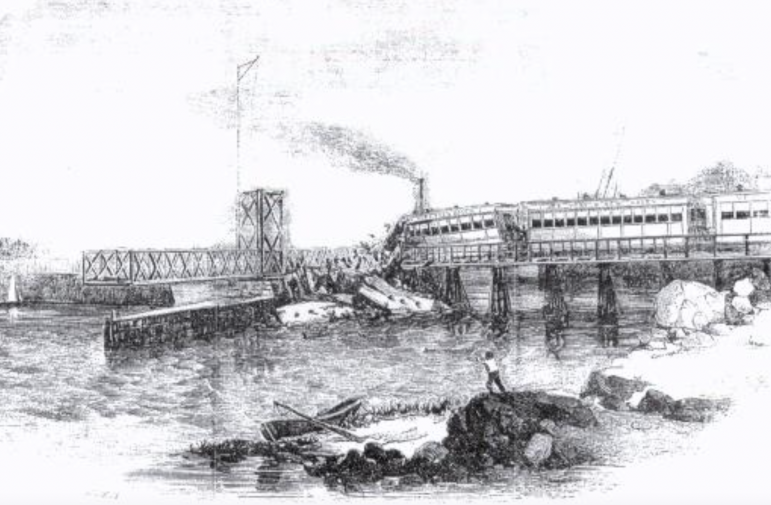 Worse than a fiscal disaster: The Norwalk train accident on May 6 1853, which killed 48 and injured 30 more at the Norwalk River, was the worst U.S. railroad accident up to that day. It took place offshore from where the Maritime Aquarium stands today.

They even admitted what went wrong and, maybe, how maybe to fix it.

Of course it’s all tied to COVID and the resulting huge drop in ridership. The mistake they made was hiring McKinsey & Co. consultants to help them forecast when ridership would return. When you pay consultants millions of dollars, they usually end up telling you what you want to hear.

McKinsey said that subway and train ridership would be back to 80 – 90% of pre-COVID levels by 2025. That obviously is not happening and we all know why.

Sure, there are the new COVID variants slowing the return to the office. But it’s a complete, systemic change in what we consider work that MTA is in denial about. People don’t want to commute if they can work from home and they won’t.

I think MTA should demand a refund from McKinsey.

Meantime, it’s Uncle Sam who’s been picking up the deficit tab to the tune of $15 billion given to the MTA. That money was supposed to see the transit agency through 2025, by which time ridership would be back to normal, right?

Subway fares used to account for 51% of operating costs. Today they cover only 32%. The agency is burning through Uncle Sam’s $15 billion much too fast. Hence the fiscal cliff in 2024. 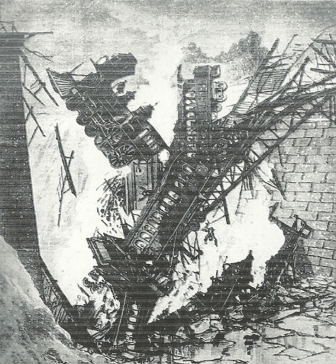 Artist’s imagining of the Ashtabula train disaster of 1876.

What’s in the abyss when MTA runs out of money and goes off that cliff? You don’t want to know. Fare hikes, service cuts, layoffs. You think Metro-North is bad now? You ain’t seen nothing yet.

Falling off that cliff will lead to a death spiral of worsening service, fewer riders, less fare collection, etc.

What’s the solution? MTA says it’s congestion pricing, NYC’s plan to toll cars and trucks entering midtown Manhattan. That plan is inching forward but is far from a done deal.

So kudos to MTA for finally being honest with us about the problems ahead. I’ll give them points for candor. But now… can we talk about that mask rule?