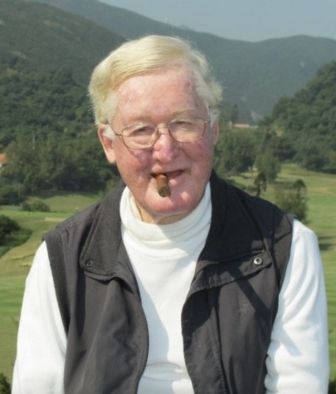 Peter was born on Dec. 20, 1924, to Connecticut parents Gladys Elizabeth and John Daly O’Neill, both born in Stamford and long time residents of Darien. After graduating from Darien High School he left for Northwestern University in Chicago with $10 from his father in his pocket.

When World War II came, Peter immediately enlisted and was sent all over the U.S. for training, including marching down Collins Avenue in Miami.

He flew dozens of missions in a B24 bomber as a tail-gunner in the Pacific and in Europe. He was one of the few men in the world to have witnessed the D-Day invasion from the air while returning from a successful sortie in the south of France to his home base in England.

Coming home from the war as a highly decorated veteran, Peter completed his studies at Northwestern University in 1948. He then attended UCLA Law School but withdrew before graduating due to a life threatening case of rheumatic fever, taking a job instead with the Marshall Plan.

This brought him to Paris, Berlin and Dublin before another U.S. government job led him to Vietnam. There, Peter began his life-long adventures as an entrepreneur investing $3,000 in a trading company in Saigon in 1954.

When the Vietnam War began to encroach on the city, Peter relocated his growing family to Dublin. However, Peter maintained his import/export and pharmaceutical business in Saigon until 1975. Then, on April 28, after successfully helping many of his employees flee, Peter left Saigon on the last commercial flight hours before the Vietcong arrived, as described in the 1990 television movie, “Last Flight Out.”

In Saigon, Dublin, Hong Kong and then Macau, Peter brought his entrepreneurial spirit to a number of endeavors. These included running a bookstore, raising Irish wolfhounds, manufacturing paper diapers, dealing in Irish antiques and, primarily, manufacturing and selling pharmaceuticals.

Arguably the golden thread through his life was golf. As a boy, Peter caddied for 25 cents a day from age nine to fourteen at Wee Burn Country Club, forming his love and appreciation of the game.

As he traveled the world, Peter made a point of playing as frequently as possible at famous courses nearby, even entering the French Open one year. In 1966, after moving to Hong Kong, he joined the fabled Shek O Country Club, where he remained an active member until Covid interrupted travel from Macau to Hong Kong. Peter held the longest membership and was the oldest member on record.

After a double hip replacement at 82, he kept on playing, sometimes beating players half his age. He maintained his brotherhood of beloved golfers until his death. Shek O Country Club will hold an annual tournament in his name, The O’Neill Trophy.

He was pre-deceased by his wife, Elizabeth Shannon O’Neill, as well as his siblings, Olive Alexander, William J. O’Neill and John J. O’Neill, known as the “Flying O’Neills” because all of whom flew during WWII.

He is survived by his children: Sean O’Neill of Somerset, United Kingdom; Kate Pearce of Glasgow; Casey O’Neill of Macau; Sophie O’Neill of St. Augustine, Florida; and Siobhan O’Neill of Brooklyn New York; and his grandchildren: Sara, Olivia, Maeve, Raphael and Jasper.

— an obituary on Legacy.com from the Darien Times, where online condolences may be left