Twenty “Genealogy & Computers” students took part in Moving Up ceremonies on Monday, May 2, in recognition of the eight weeks of study they undertook starting in March at the non-profit Lifetime Learners Institute at Norwalk Community College. 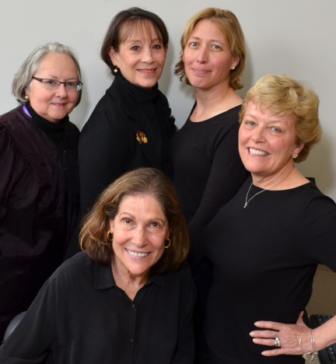 The students received certificates from the chair of the Curriculum Committee of the Lifetime Learners Institute, Richard Di Vecchio, and the facilitator for the “Genealogy & Computers” classes, Janeen Bjork.

The popularity and the diversity of students in the pilot “Genealogy & Computers” course in fall 2015 convinced the LLI curriculum committee that it was time to offer both Beginner and Intermediate level classes.

Beginner students were introduced to the fundamentals of Genealogy through classroom instruction and homework while also improving their computer knowledge and ability. The Intermediate students requested and received six weeks of training in advanced newspaper research techniques.

They were surprised and delighted to find stories that ranged from human interest pieces, items that included family recipes to the sad and tragic, like the foreclosure of a family homestead. Each Intermediate student is donning a mortarboard decorated with newspaper and their certificates also reflect the newspaper theme.

Most of the “Genealogy & Computers” students took advantage of a concurrent free online Genealogy course from the University of Strathclyde in Glasgow, Scotland. That meant at least four hours of homework, in addition to the time required for the students to do their own family research.

Katy Rahe of Rowayton said, “I have always been interested in my family’s genealogy knowing that some ancestors came over on the Mayflower and others were in Germany so when I saw that Lifetime Learners was offering Beginning Genealogy at Norwalk Community College I jumped at the opportunity.

“LLI facilitator Janeen Bjork’s genealogy expertise, sharing of tools and resource links and her never ending enthusiasm for genealogy is inspiring. She has not only shared the resources on how to do the research but Janeen has shown us how to have fun discovering and telling the story of our ancestors!”

As a student in the Intermediate Class, I found the Newspapers.com website that Janeen made available was a treasure trove! I was able to solve the mystery of a possible first wife and son to my husband’s grandfather from 1895 newspaper announcements.

Bjork, a Greenwich resident and television researcher who has been sharing her love of family history with others through a variety of Genealogy programs in New York and Connecticut, says she was really impressed with this group of overachievers.

“Students in both classes were introduced to a plethora of resources and methodology in a very short period of time,” Bjork said. “It was gratifying to see and hear the finds the students were making between classes when they employed those resources and techniques.”

The students in both “Genealogy & Computers” classes expressed interest in returning for more advanced instruction in the fall. The two levels of “Genealogy and Computers,” and 40 other, one-day two-hour; daytime courses that meet up to eight weeks, will resume in September.

For information or to receive a free detailed course catalog phone 203-857-3330 or see the Lifetime Learners website. Members pay a $50 annual fee and $30 per course.