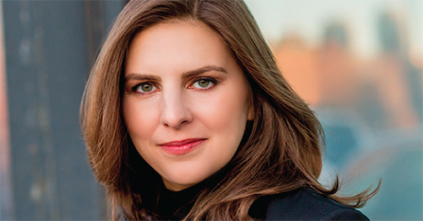 Stamford Symphony Orchestra’s “Maestro 2017-2018 Season” begins Saturday, Oct. 14 with a pre-concert gala and opening weekend conducted by the first of five finalist conductors who will take the podium this season.

There will also be a concert at 3 p.m., Sunday, Oct. 15.  Kids get free admission Sunday with an accompanying adult.

Before the Sunday concert, children ages 7-12 are invited to a free MusiKids interactive education program at 2 p.m. in the Upper Lobby of the Palace Theatre.

“If there were a futures market for classical music, the touts would be pushing Lidiya Yankovskaya.” –WBUR

Ms. Yankovskaya has a BA in music and philosophy from Vassar College and an MM in conducting from Boston University.  She is also the recipient of Marin Alsop’s Taki Concordia Fellowship Program and Dallas Opera Institute for Women Conductors Program.

Ms Yankovskaya will be leading the Stamford Symphony in an all-Russian musical program that features works by Tchaikovsky, Glinka and Rimsky-Korsakov. The audience will have a chance to hear Ms. Yankovskaya as she hosts the always FREE Behind the Baton lecture one hour pre-concert.

Stefan Jackiw is recognized as one of his generation’s most significant artists, captivating audiences with playing that combines poetry and purity with an impeccable technique.

Hailed for playing of “uncommon musical substance” that is “striking for its intelligence and sensitivity” (Boston Globe), Jackiw has appeared as soloist with the Boston, Chicago, Cleveland, New York, Philadelphia, and San Francisco Symphony Orchestras, among others.Stefan is also an active recitalist and chamber musician. He has performed in numerous important festivals and concert series including the Aspen Music Festival, Ravinia Festival, Caramoor, New York’s Mostly Mozart Festival, The 92nd Street Y in NYC and with the Philadelphia Chamber Music Society among others.

As a chamber musician, Jackiw has collaborated with such artists as Jeremy Denk, Steven Isserlis, Yo-Yo Ma and Gil Shaham.

Born in 1985 to physicist parents of Korean and German descent, Stefan Jackiw began playing the violin at the age of four.  His teachers included Zinaida Gilels, Michèle Auclair, and Donald Weilerstein.

He holds a Bachelor of Arts from Harvard University as well as an Artist Diploma from the New England Conservatory, and is a recipient of the prestigious Avery Fisher Career Grant.  He lives in New York City.

This Black and White themed event will be catered by Marcia Selden Catering and will feature a cocktail hour with live music, dinner and silent auction followed by the Opening Night concert.

As part of the Maestro Search Season, all audience members will be able to share their thoughts about each conductor. Audience feedback surveys will be inserted into the program book and ushers will be collecting completed surveys immediately after the concerts.

Stamford Symphony encourages all concertgoers to participate. We value your input. As the Stamford Symphony and our audience embark on the journey to choose our next podium leader, it is important to attend each concert this season.

Subscriptions and Single Tickets Are Now on Sale

More About the Stamford Symphony