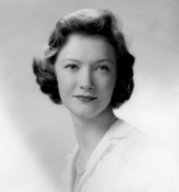 She was born in Providence, R.I. and raised in Warwick, R.I. Her parents were Mr. and Mrs. Merton F. Cokely, and she had an older brother, Kenneth.

Born at the onset of the Great Depression, Selma was able to advance herself by earning an academic scholarship to Pembroke College (at the time, the sister school to Brown University).

— an obituary from Leo P. Gallagher and Son funeral home

Selma then went to New York City to launch a career in finance. She started at the New York Federal Reserve Bank. Following that, she became a portfolio consultant at Merrill Lynch, where she met her husband, Jack Lamensdorf.

The couple moved to Darien and then New Canaan, where they raised their daughters — Christine, Karen and Nancy. After the couple divorced, Selma moved to Westport, and later retired to Greenwich.

Selma enjoyed a successful and varied career. She left the world of finance when she started her family, then went back to school, Fairfield University, to obtain a master’s degree in psychology. In 1974, Selma became a school psychologist for Norwalk Public Schools, responsible for five of their schools.

Selma had many interests and particularly enjoyed intellectual pursuits. She was a member of several book clubs, one of which she participated in for over 30 years.

After having sustained a back injury in the late 60s, Selma turned to yoga to heal. That was the beginning of a lifelong interest in both the physical and spiritual side of yoga. She became an instructor of advanced practice and, as far back as the 1980s, devoted herself to the teachings of Buddhism.

She is remembered for her beauty, intelligence, kind and loving spirit by her family, Christine and Bob Kleinert, Karen and Nancy Lamensdorf, and grandchildren Sophie, Jackson, Matthew and Madeleine.

In lieu of flowers, donations can be made in Selma’s name to the Alzheimer’s Association.