The first time a property sends out a false fire alarm or burglar alarm, the town fines the alarm owner $100, and in the future, the second fine should be $150 and all future fines within a year of the first alarm should be $250.

That’s the Board of Selectmen’s recommendation, decided in a 4-0 vote Monday night, to the Representative Town Meeting. The proposal would increase the second and third fines. Currently, they all stand at $100.

Selectmen hope the change in the town fire alarm ordinance will discourage more false alarms, especially from those properties where false alarms have been occurring again and again. One property had eight false alarms over a one year period.

“I fully support this,” First Selectman Jayme Stevenson said. “This is something that the volunteer fire departments were eager for us to take up, to help to try to assist in reducing the number of false alarms.

“I think that this is the least that we could do,” she said. “I wish that we weren’t constrained by state statute, but we are.”

Before the vote, Town Administrator Kathleen Buch gave selectmen a brief report answering some of the questions the board had in its Aug. 5 discussion of the subject.

For instance, selectmen wanted to know if the state limits fees that can be charged for false alarms (it does, to $250) and whether the town could withhold giving out other town services like beach passes to people who hadn’t paid false alarm fees (state law forbids that).

Part of Buch’s report answering the Board of Selectmen’s questions about false alarm fees.

Bush recommended the fee increases that the board adopted. The Fire Marshal’s Office is following up with people who haven’t paid their fees on time, Buch said, and she provided a table showing what percentage get paid. 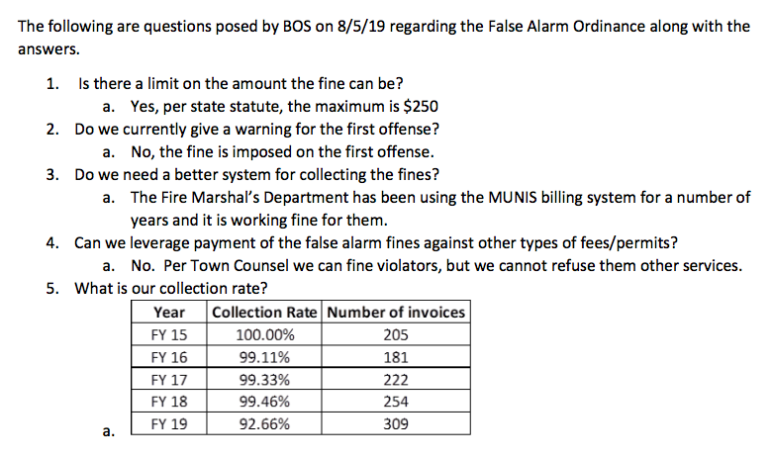