Richard Alan Feldon, 87, went to a Super Bowl in heaven after passing away on Friday, June 7. 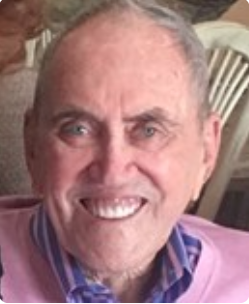 Richard Feldon, 87, passed away June 7. A memorial service is scheduled for Oct. 19.

His enthusiasm for sports, military history, music and travel was surpassed only by his love for his family and friends, who will miss and never forget him.

An avid fan of the Cincinnati Bengals and one of the first season-ticket holders, Dick rarely missed a game — even during his worldwide travels. When football season was over, you’d find him playing golf or watching tennis, baseball, basketball, or at least a great Jeopardy show.

Dick spent 39 years at The Procter & Gamble Company, retiring in 1994 as managing director of world strategic planning for the Paper Products Division. He was particularly proud to have been on the team that created Mr. Whipple (“Please don’t squeeze the Charmin”), to have labeled Bounty as “the Quicker Picker-Upper,” and also to have introduced Pampers to the U.S., Europe and the world.

His career started in sales, then brand management, and eventually strategic planning, where he voyaged across the globe and eventually transferred with his family for several years to Germany and Belgium, kindling his strong interest in international travel.

— This obituary previously was published in the Cincinnati Enquirer, the Palm Beach Post and other newspapers.

Born August 15, 1931, in Darien, Connecticut, Dick was close to his sister Barbara and brother Bob. He attended Valley Forge Military Academy and Pomfret School, and then became a life-long Wildcat fan and Sigma Nu, receiving his degree in business administration from Northwestern University in 1953. He met Joan Sorge there and married her in 1954, shortly after he enlisted in the U.S. Marine Corps, where he served at Quantico, Virginia, and then in Japan and Korea.

Moving to Terrace Park, Ohio, Dick became a councilman and vice mayor, and was active with the Terrace Park Players and Cincinnati Music Theater as a producer, director, and actor (and occasional singer). Broadway musicals continued to be his favorite, especially “Mame,” “Carousel,” “Music Man,” and “Mama Mia.”

After he retired, Dick and Diane cruised much of the world and then moved to Palm Beach Gardens, Florida, where they made an amazing number of warm and wonderful friends. Dick served on the board of the BallenIsles Country Club. At the club, he challenged many of the members in bridge.

Dick was the embodiment of an open-minded intellectual who held competence and integrity above political affiliation. His friends and family will always remember Dick’s affection for animals, way with words, sense of humor, intellect, love of people, and especially his smile.

Known for his smile and laughter with friends, Dick’s greatest joy was his family.

A memorial service and celebration of life will take place on Saturday, Oct. 19, 2019, in Palm Beach Gardens — details to come.

Meanwhile, friends are encouraged to donate to the Richard A and Diane Feldon Fund at the Greater Cincinnati Foundation, 200 W. Fourth St., Cincinnati, OH 45202.