On June 3, the state Senate joined the House to pass the legislation that would slap a 10-cent tax on single-use (that is, thinner) plastic bags on Aug. 1 and ban those bags 23 months later, on July 1, 2021.

On Monday, the Darien Representative Town Meeting passed an ordinance (in an 86-to-2 vote) to ban plastic bags for larger stores by Jan. 1, 2020, and in all stores a year later. Larger stores can provide recycled paper checkout bags for a 10-cent charge. 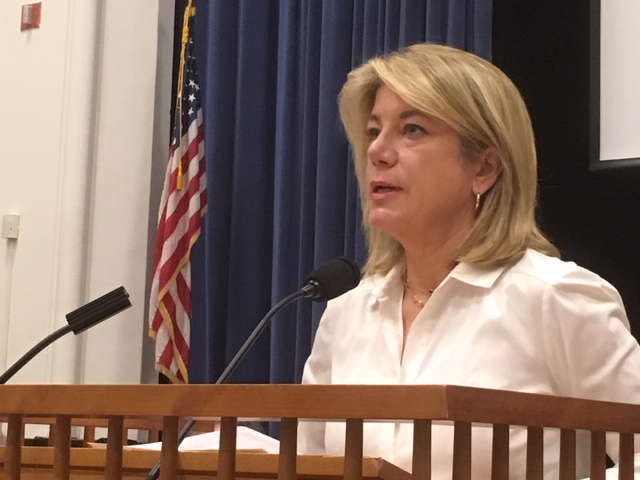 Monica McNally, chair of the RTM Public Works Committee, presented the proposal at Monday’s RTM session, explaining various parts of it and even going through a timeline (see below) of when various changes in state and local law would take place when the two sets of rules are combined.

(The state law allows towns to enact stricter bag regulations, including the extra 10-cent fee Darien will charge for paper bags, both McNally and Frank Kemp, chairman of the Town Government Structure and Administration Committee, both told the RTM.)

Here’s how those new rules will work out in upcoming months and years — and when they’ll go into effect (assuming Lamont signs the state bill, as widely expected), according to McNally:

Businesses can also sell reusable plastic checkout bags, but they’ll will need to be at least 12 mil (12 thousandths of an inch) thick. The town’s new regulation on charging 10 cents per bag is meant to make sure that people are nudged into remembering to bring in their own reusable bags, McNally said. 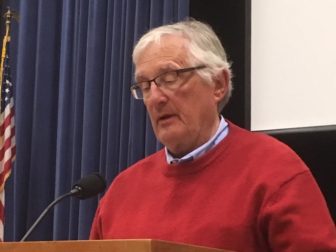 Ultimately, she said, the purpose of the ordinance is to get people to take their bags with them into the store. When stores provide only paper bags, those will be more expensive to buy and more pollution will be created by their use than plastic bags create, McNally said — but if they become litter, they’ll decompose relatively quickly.

Plastic bags cost businesses about 1.5 cents, McNally said. Paper bags typically cost 10 to 20 cents. The 10-cent fee is meant to help businesses with the extra cost of buying paper bags instead of plastic ones, she said.

McNally addressed some topics in a list of “frequently asked questions” she and others working on the ordinance had been getting. Here’s one of them:

Why don’t all stores have to charge the environment fee?

McNally reminded the RTM that the ordinance had gone through a lot of deliberation and public hearings.

Soon after Oct. 15, when the Board of Selectmen recommended that the RTM look into a checkout-bag ordinance, committees were assigned by the RTM Rules Committee to work on it, the Darien BYO Group, which pushed for the ordinance, was consulted, and business owners and managers were interviewed by committee members and First Selectman Jayme Stevenson, McNally said.

The public was invited to comment on the idea in emails and letters to local lawmakers, and about 150 were sent in. About 21 news articles were published about the Darien proposal and 51 people spoke at two public hearings, attended by 179 people, McNally said.

Many of the emails, along with written statements read at public hearings and information on ordinances passed by other Connecticut towns to restrict checkout bags were posted on the town government website, along with other research and with drafts of the proposed ordinance, she said.

RTM Moderator Seth Morton praised McNally and other RTM members and town officials who had gathered information and deliberated on the proposal.

“These folks put in a lot of time on this because it was not an easy thing to deal with — very complex, and the target kept moving. So congratulations to all of you. Nice job, and great work.”

See the Discussion on Darien TV79

This video of the long RTM meeting on Monday, June 10 includes the discussion and vote on the checkout bag ordinance in the last about 20 minutes, from time stamp 2:05:20 to 2:26:10 (the end of the meeting).

One thought on “How Darien’s and the State’s New Checkout Bag Rules Should Work, and When”