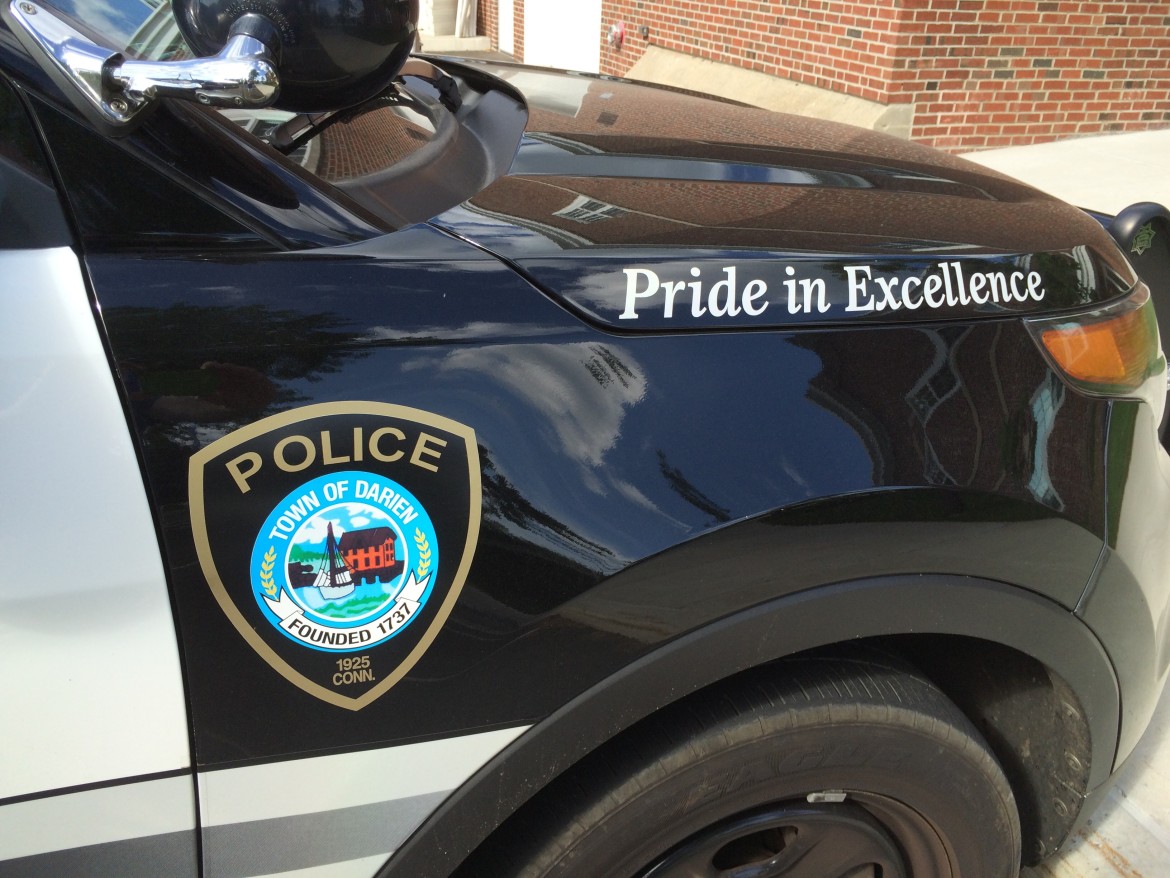 Steve Wilkos “is lucky to be alive after a car crash sent [him] to the hospital,” according to a report Tuesday on TMZ.com, a national entertainment-oriented news website that cited “law enforcement sources in Darien, Connecticut.”

Wilkos was taken to a hospital and later released, according to the TMZ report at 11:08 a.m., Tuesday. The accident is said to have occurred late on Sunday afternoon, Jan. 21.

On Jan. 21, 2018 at approximately 4:20 p.m., an officer on patrol discovered a one-car motor vehicle accident on West Ave. in the area of Turnabout Lane. The officer observed a single vehicle lying on its passenger’s side at the edge of the eastbound lane, which appeared to have sustained heavy damage.

Based on the scene, it is believed that the vehicle struck several roadside objects on West Avenue prior to coming to rest. The lone occupant of the vehicle was identified as Steven Wilkos of Darien.

Due to Wilkos’ injuries and the severity of the accident, he was transported to Stamford Hospital for further evaluation and treatment.

At this time, the cause and nature of the accident is under investigation by the Darien Police Department. No further information will be released at this time.

Darien police have announced almost nothing about the incident [updated to add: until 11:58 a.m., Wednesday].

The accident is not the first instance in recent months in which Darien Police Department said either little or nothing about incidents in town, including another one involving a serious injury.

The department did not issue news releases about an alleged confrontation in December that sent an elderly man to the hospital with a fractured hip. Nor did it issue a news release about a rollover accident on Dec. 29 on Hollow Tree Ridge Road near Camp Avenue (although, contrary to the original version of this article, a spokesman did respond to a Darienite.com request for more information about the incident).

TMZ reported that Wilkos said he wasn’t wearing his glasses before the crash and was reaching for them when he hit a curb and struck utility poles and a tree. He told the website wasn’t drinking or on illegal drugs and never takes either.

“Wilkos tells us he’s pretty beat up but will be O.K.,” TMZ reported.

Darien police issued no announcement about the car crash on West Avenue near its intersection with Noroton Avenue [updated to add: until 11:58 a.m., Wednesday] beyond a brief tweet and a statement by Lt. Jeremiah Marron to the Darien Times on Sunday that “the driver of the car was injured and transported to the hospital.”

The Darien Times relied on a photograph and, apparently, a tip about the accident from West Avenue resident John Boulton.

Here’s the Darien Police tweet about the incident — the only announcement the department issued concerning this incident between the time it occurred sometime late Sunday afternoon and late Wednesday morning: 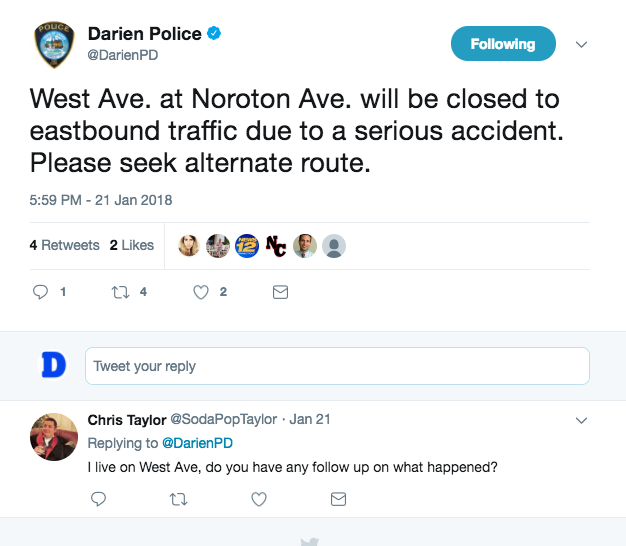 This is the entirety of Darien Police Department’s announcement about the serious accident that, it was reported elsewhere, sent a driver to the hospital. The question in the reply to the tweet, seen below it, received no public reply.

The entire 20-word statement: “West Ave. at Noroton Ave. will be closed to eastbound traffic due to a serious accident. Please seek alternate route.”

Darien Police Department did not issue any news release about the accident and gave out no further details about it [updated to add: until 11:58 a.m., Wednesday] — following a pattern in recent months of keeping silent about serious incidents that closed town roads or involved serious injuries to people in town or both: 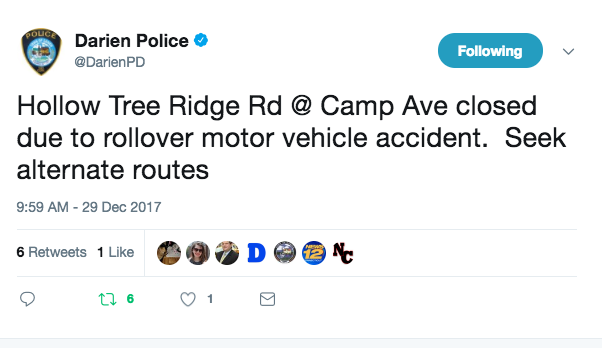 CORRECTION, 2:28 p.m.: This article originally stated that the Police Department did not respond to a request for information from Darienite.com on a rollover accident on Dec. 29 near the intersection of  Camp Avenue and Hollow Tree Ridge Road. In fact, a check of past emails between Darienite.com and the department shows that a department spokesman did respond with information within several hours of the request on Jan. 3. The department did not issue a news release about the accident. The article has been updated to reflect that.