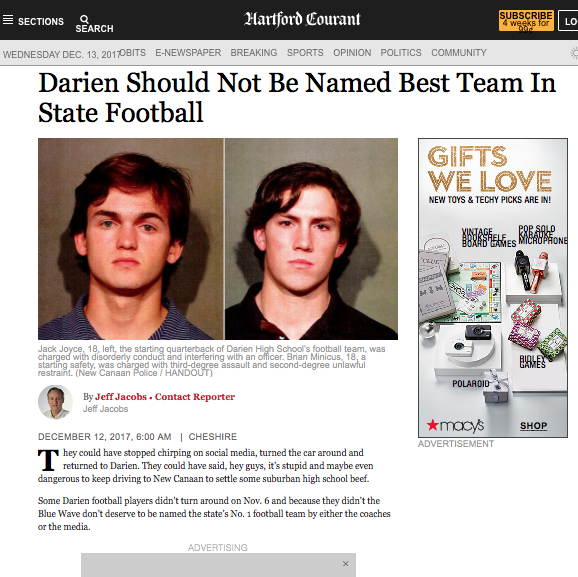 The Hartford Courant’s ranking of high school football teams puts Darien’s Blue Wave at the top statewide for 2017, but a sportswriter in the state wrote a vociferous objection to that which appeared Wednesday — in the Hartford Courant. 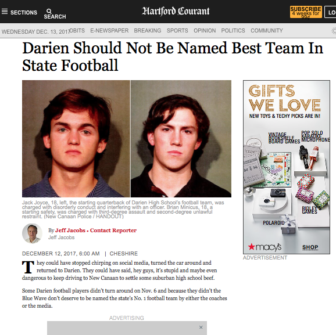 The article noted the arrest of three Darien players in New Canaan — Jack Joyce, Brian Minicus and a 17-year-old who hasn’t been named because he isn’t 18 — in connection with the beating of a New Canaan student at a house in that town.

Darien lost to New Canaan 27-0 when Jack Joyce was benched for the game after being charged with disorderly conduct and interfering in an investigation. In the following games that led to the state LL final last Saturday, Joyce was put back on the field.

“The Blue Wave defense was the story on the field, but the off-the-field issues with the arrests of quarterback [Jack] Joyce and safety Brian Minicus left a cloud over the title run,” the story, by Sean Begin, said.

“[N]obody’s going to convince me Darien deserves it. If quarterback Jack Joyce had been held out the rest of the season after that fight at a New Canaan house party, if Darien had taken all the disciplinary steps it could have taken and still won the Class LL title, well, that’s a different story.

“That’s the story that didn’t happen.”

After the Turkey Bowl loss to New Canaan, Joyce was back on the field for Darien’s game against West Haven, and was decisive in helping to win it. “The Blue Wave couldn’t have won without Joyce,” Jacobs wrote.

“I know coaches who would have dismissed Joyce from the team for the rest of the season,” Jacobs wrote. That’s a decision in the hands of Coach Rob Trifone together with other Darien school officials, he pointed out, and he believes they made a wrong one.

Correction: Joyce was not accused of holding down the victim when he was punched. An earlier version of this article was incorrect.