Most of the roof starts high near the front of the building and slopes back toward the rear. At a commission meeting earlier this month, Cameron said she doesn’t like the modern look — she’d prefer something that looks more traditional — and pressed Shake Shack designers to reconsider.

Cameron even brought to the meeting some images she’d found of Shake Shack restaurants (which the company calls “shacks”) that had more traditional roofs sloping forward to show to the architects.

Hers was the most prominent criticism of the proposal at the Feb. 2 meeting. But what Cameron didn’t have was the support of her fellow board members, most of whom said they thought the idea looked fine.

Baywater Properties (the owner of the tract), Shake Shack and their consultants discussed their plan for the site, which has been formally submitted to the board. The plan and reactions to it (mostly concerning traffic and drainage) from the Planning & Zoning Department staff and consultants were discussed. 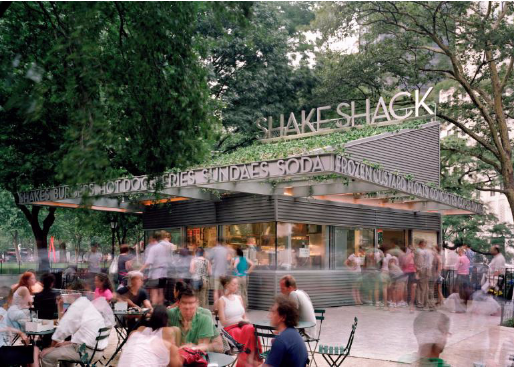 The original Shake Shack at Madison Square in Manhattan 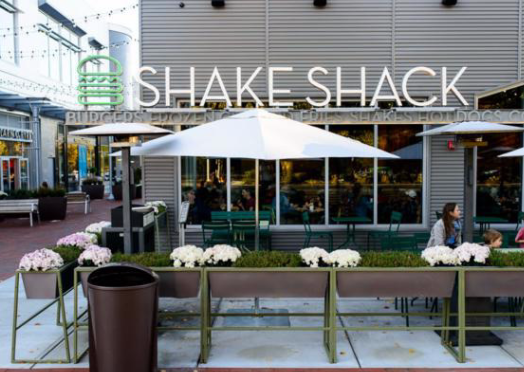 This Shake Shack shows the prominent sign and hamburger logo

What Shake Shack in Darien would look like from the front.

More views of the proposed Shake Shack in Darien

Shake Shack in Westport, currently the closest of the chain's restaurants to Darien.

A (blurry) look at the lot plan from above (the Post Road is at the top). 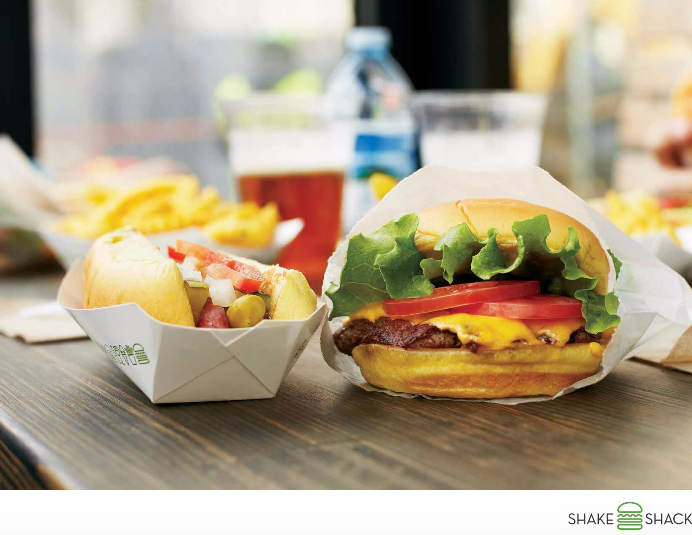 The shape of the roof helps shield rooftop equipment from the view of drivers coming up and down the Post Road, Mary Bomba, a design manager at Shake Shack told the commission.

“This [roof] angle does two things,” she said. “It maintains our brand identity — we’ve always had a lot of angles. We’ve always had this form. You can see it in the original Shake Shack. It’s one aspect that ties them all together. And also, it has a practical purpose of covering the rooftop equipment.

Cameron then brought up the different roofs she’d seen in online images of other Shake Shacks.

“Our goal for this building is to maintain a certain level of what we call a ‘Shackness’ in the angle, and the form of the building is very much important to our brand,” Bomba replied.

Lou DeAngelis, senior director of construction and facilities for Shake Shack, replied that Shake Shack tries to make all its buildings somewhat different. One of the images Cameron referred to, he said, was of a restaurant that had exclusively pedestrian traffic.

“This is a site [in Darien] that is going to be very dependent on visibility of the building and visibility of that brand expression. […] This is actually the first Shake Shack that we will ever build free-standing, ground up on a major thoroughfare anywhere in the world.” (The Westport Shake Shack is in a space formerly occupied by different restaurant, and the building is shared.)

Cameron responded: “One of the things that I don’t really like is the height and the way you’re putting some signage way up high, and then other signage way down low. What I like about this [referring to one of the images she brought to the meeting] is that their signage is all together. […] I don’t mind the signage going around [the building]. That’s your brand. I don’t like having pieces of it way up high.”

A bit later, Cameron said of the sign and the roof line, “It looks like fast food.”

John Cunningham, another member of the commission, said, “I don’t have any problem with it.” Sini added that he didn’t, either.

“All right, I got ‘outvoted,'” Cameron said. “If everyone loves that roofline, I’ll just be the one person who said ‘eeewugh.'”

Board member Richard DiDonna later said, “This reminds me of the drive-ins you used to see with the girls on roller skates. This is very distinctive in that sense. It’s very retro — and I like that.”

Genovese told the commission that roofline needs to hide large equipment on the top of the building, including a “water wash system which scrubs the smell” from the fumes coming from the kitchen.

There are other ugly pieces of rooftop equipment above restaurants downtown along the Post Road, Genovese said. They’ve been largely hidden on top of Baywater’s 1020 Post Road building, for instance, but since the street is only two lanes wide there, he said. Near the proposed Shake Shack, the Post Road is four lanes wide and you can see the building from a greater distance, and at that angle, further into the roof, he said.

A traffic consultant working for the P&Z (with the agreement of town Fire Marshal Bob Buch and the Police Department) had suggested removing four parking places closest to the entrance and exit to the lot because vehicles parking would get in the way of vehicles entering and leaving.

The proposal has been modified to remove those spots but create others where the loading area had been proposed in the back. David Genovese, principal of Baywater Properties, said Shake Shack doesn’t really need a loading area because its supplies are always delivered in the morning, before the 10 a.m. opening of the restaurant.

The nearest parking spaces to the entrance are now 30 feet away, said Jonathan Richard, a professional engineer with Tighe & Bond, which is working for the applicants.

Consultants working for the applicants (Baywater and Shake Shack) are conducting further traffic studies on the Westport location so that town officials have a better idea of what kind of traffic this restaurant may generate.

The restaurant will not have a drive-thru window, DeAngelis said. “One of the basic tenets of our design is that we want to be a community gathering place, and in order for communities to gather, people have to actually get out of their cars and gather. […] A drive-thru is not anywhere in our vision in the future — or distant future for that matter.

Bomba said that in reaction to comments from the initial, informal proposal several months ago, the building has been designed without a band of words going around the front and side, but commission members replied they didn’t in fact have a problem with that.

Bomba also described the patios outside Shake Shacks as “a really huge part of all of our shacks. The main entrance to the restaurant is on the side of the building, where a “pooch park” for dogs is located, along with bicycle racks.

Drainage from the site will be improved so that more of it goes into the 13-inch-wide storm sewer underneath the property and less goes on the road itself during heavy storms. That sewer in turn connects to a 24-inch-wide sewer underneath Post Road. That entire area of the Post Road used to be wetlands, and it has had flooding problems in some storms.

A dumpster in the back has been located to a corner of the property away from the only residence that borders the tract, he said.

The back of the property is actually 25 feet deep into a residential zone, but no zoning change is being requested, since that part of the property isn’t being used. There’s about a 50-foot-deep “buffer zone” with undeveloped land that will remain as woods abutting Old Kings Highway South. There won’t be any access to that road.

The Shake Shack proposal was also scheduled to go before the Architecture Review Board (which may make recommendations on the look of the building, including the roof), and the Zoning Board of Appeals, which will consider the size of the signage (the restaurant wants a variance to allow for a larger sign on the building).

“Other than the signage, everything complies with the zoning regulations,” Genovese told the board.

At one point early in the meeting, Genovese got some laughter from the room when he said, “If I don’t tell you that it was my daughter’s idea to bring Shake Shack to Darien, I’m going to get in big trouble, so Lilly gets some credit for that.”

Genovese said that when he looked into Shake Shack, he found kids were pressuring their parents to drive to the one in Westport. He said it’s also a family-friendly restaurant, just as Chuck’s Steak House was, “but more affordable.”