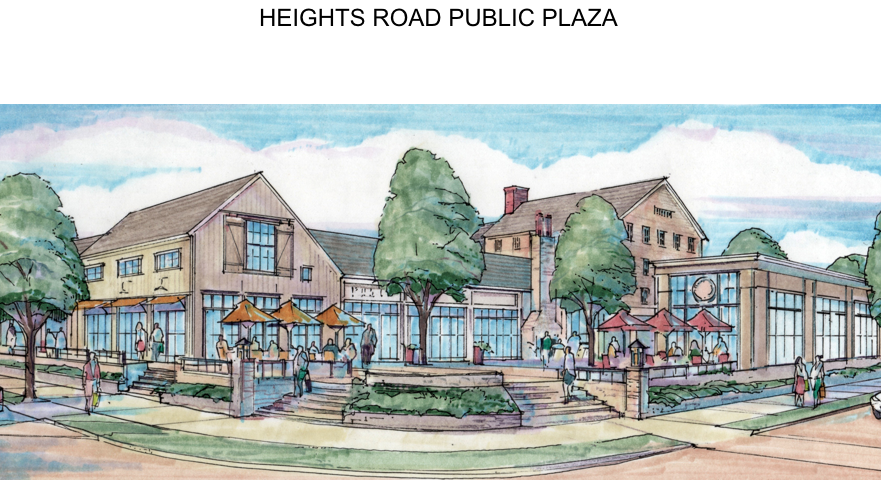 First Selectman Jayme Stevenson told the commission that she wants to work with the developers in a public/private partnership on a drainage system that will improve the current situation, in which Heights Road and some of the storefront space facing it get flooded in major storms. The resolution incorporating various zoning changes, which was approved unanimously by the commission, includes language encouraging that. 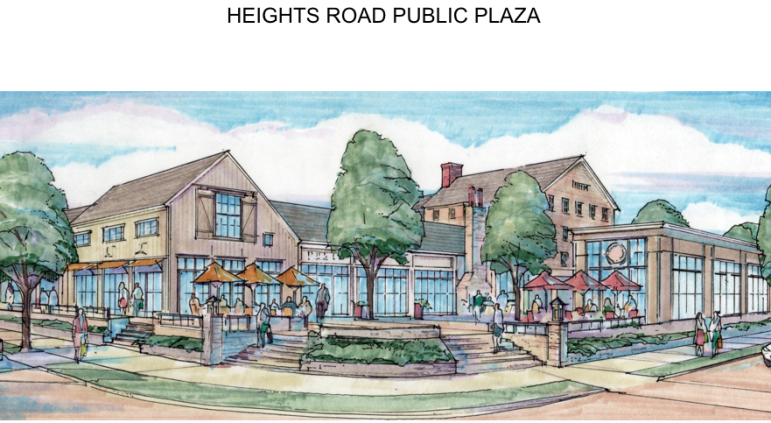 The commission decided that green space (without buildings or paved areas, unless the pavement is part of a public plaza) must cover 20 percent of the land developed by each of the two major landowners — the Palmer family (owners of Palmer’s Market and the Noroton Heights Shopping Center) and Federal Realty (owner of most of the block between Edgerton Street, Heights Road, Noroton Avenue and West Avenue).

The developers have proposed mixed use, “village”-like makeovers of the Noroton Heights business district with stores, apartments (not owner-owned condominiums, as Baywater Corbin is proposing downtown) and some office space. Public plazas have been proposed and pleasant architecture envisioned that are meant to make the area a pleasant one that would encourage area residents to walk there, spend time there and meet friends there.

Stores would be on the first floors of buildings, with apartments above and garage parking decks below. In return for various public amenities like public plazas, developers want to construct higher buildings.

Current regulations allow for buildings of two stories and a maximum of 30 feet high (as measured from the midpoint of a roof’s eaves and top, so all building measurements are actually somewhat higher, and architectural elements like copulas can be higher still). In return for providing a certain amount of public space (at least 5 percent of the total land area of each tract), the developers wanted buildings up to four stories high in some places away from streets.

Federal Realty had proposed allowing a fourth story on parts of their property, with a maximum building height of 55 feet — but the commission’s resolution rejects that idea. Many neighbors had objected to the height proposals at public hearings.

The resolution makes no change in previous zoning regulations that allow 12 housing units per acre. The developers have said they plan fewer apartments than allowed on the sites. The Palmer/Noroton Heights Shopping Center site is 3.9 acres, the Federal Realty site (where Stop & Shop and other stores now sit) is 8.9 acres.

In return for constructing buildings higher than two stories and 30 feet, each of the two developers must provide either 5 percent of the land or 10,000 square feet (whichever is more) as public space — areas free for the public to use, whether or not they go to the property to shop. The developers are solely responsible for maintaining the public space, not the town government. 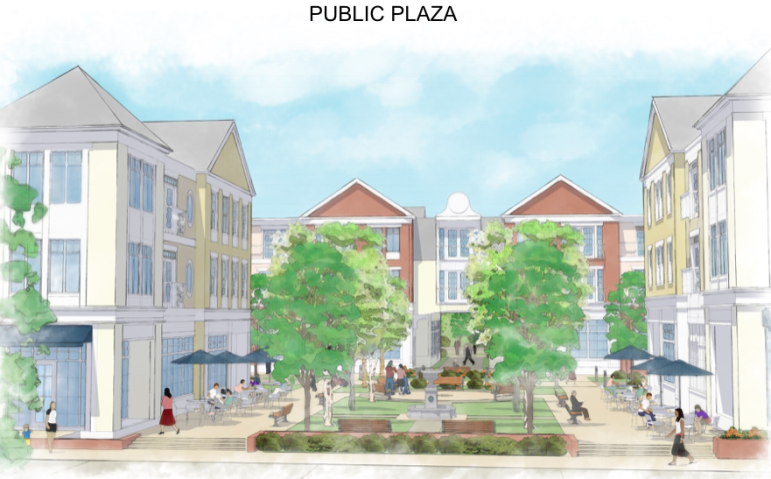 Looking north from Heights Road toward the largest public plaza of the Palmer’s proposal, VERY roughly where Jimmy’s Southside Tavern is, along with the surrounding area.

Included in that public space, each developer must provide at least one public plaza of at least 3,500 square feet (that compares with Grove Street Plaza in downtown Darien is 2,600 square feet, not including walkways in front of the buildings that face it or the sidewalk between it and Grove Street.)

The P&Z wants the public plaza to look compact enough that it can be considered a gathering place for a lot of people, so a requirement has been added that a “box” 35 feet long by 35 feet wide must be able to fit in it. The plaza must include elements like a water fountain or some equivalent feature (possibly a statue) and places for people to sit. The P&Z Commission will decide whether or not a proposal for public plaza elements fit the requirements and whether a proposed “public plaza” is actually a plaza.

Asked after the vote for Federal Realty’s reaction to the P&Z decision, Patrick McMahon, director for development for the company, said he and other Federal Realty officials would need some time to “digest” it. He said he expected to have a better idea by Thursday.

The P&Z Commission’s decision on the zoning change is only one step in the application process, although a major one. The other major step for both Federal Realty and the Palmer family is submitting a site plan. That will include studies of the impact the developments would have on traffic and specific proposals for parking and sewer drainage.

At another point in Tuesday’s meeting, the commission discussed the Baywater Corbin proposal for redeveloping the downtown block between Corbin Drive, the Post Road and Interstate 95.

Three commission members said they objected to the proposal for a six-story building roughly 85 feet high, as proposed.

“They have a good plan here,” said P&Z Chairman Susan Cameron. “I personally think it’s too tall — what they’re proposing is way too tall.”

Stephen Olvany, the board vice chairman, said he didn’t object to a building five stories high, but added, “I do have a problem with 85 feet-plus” as a building height.

“I think six [stories] is too high,” said John Sini, another commission member. “I think there can be a monumental five story building,” if it stood next to Interstate 95 and away from the Post Road. “There’s definitely some value in having one — I think — a signature building along the highway.”

No decisions on that zoning change proposal were made by the commission, which decided to continue discussion on Sept. 6. As with the Noroton Heights proposals, the next major step would be a site plan. At the earliest, even with approvals from all town boards and commissions, construction wouldn’t be expected to start for any of the three proposed developments until sometime in 2017.