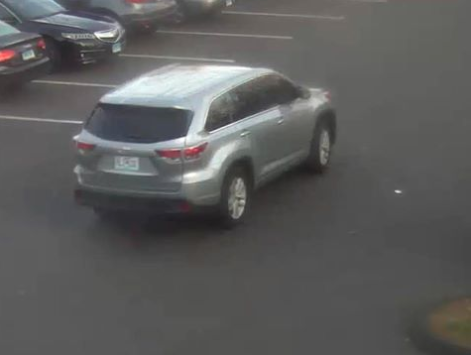 Image of the suspect's vehicle in the Darien YMCA parking lot. The image was taken from a surveillance camera recording and posted to the Felony Lane Gang timeline on Facebook.

Early Friday morning, between 7:15 and 8:10 a.m., a sport utility vehicle pulled into the Darien YMCA parking lot, and when it stopped, two men got out, smashed windows of nearby cars and took purses that were on the floor of each.

The burglaries were similar to those of the Felony Lane Gang, a Florida group that law enforcement authorities have said contain 700 members who rent vehicles across much of the country, smash windows to grab purses, and hand over credit cards, debit cards and checks for accomplices to exchange for money. The group has struck vehicles in Darien and other nearby communities.

Image of the suspects’ vehicle in the Darien YMCA parking lot. The image was taken from a surveillance camera recording and posted to the Felony Lane Gang timeline on Facebook.

When they go to banks, they tend to use drive-up windows in the lane farthest from the teller, leading police to dub them the “Felony Lane Gang.”

They often commit many burglaries in the same region, often striking at parking lots of fitness clubs and parks, but no area communities reported similar thefts in the days surrounding the one in Darien, a Police Department spokesman said. 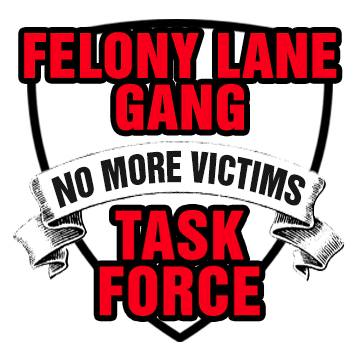 However, the law enforcement Felony Lane Gang Task Force account on Facebook reported that Ridgefield police say a burglary at a parking lot of a daycare center the day before the one in Darien — suggesting it might be related to the gang. In that incident, according to a report on Ridgefield Patch, a silver-colored SUV was used.

In Poughkeepsie, N.Y., two weeks ago, on Monday, Nov. 21, a woman cashed checks found in a stolen purse, according to the Dutchess County Sheriff’s Office.. Although the victim immediately shut down her credit card and check accounts, checks were cashed at six different bank locations, and $20,000 was stolen.

Three days before that, on Friday, Nov. 18, handbags were stolen from vehicles parked at a YMCA in Glens Falls, N.Y., many miles north of Dutchess County. A witness told police, who suspect the Felony Lane Gang was the culprit, there that a white SUV was the vehicle used by the two thieves, according to a report in the Post-Star newspaper. (This Google Map shows the locations of Glens Falls, Poughkeepsie, Ridgefield and Darien.) 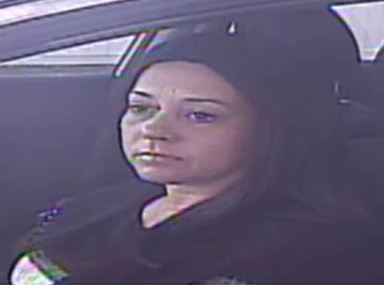 The Darien thefts were recorded by the YMCA’s surveillance cameras in the parking lot. Darien police gave this account of the incidents:

At 8:10 a.m. a 48-year-old Stamford woman told police one of the windows on her 2017 Jeep Compass was smashed and a black leather Coach-brand handbag was taken. The bag is valued at $350, and it contained a $200 Michael Kors wallet in which there were three debit and credit cards and the woman’s driver’s license.

The handbag was under a North Face jacket valued at $200 and both were on the floor in front of the front passenger-side seat — so not even hiding the purse was enough to deter the thieves. The victim in a second burglary in the same parking lot told police that she had reclined her front seat to obscure her purse, which she left on the floor in front of the back seat, but that evidently didn’t help, either.

Police found that the thieves had ignored many other vehicles in the lot, many of which police found unlocked.

The second vehicle hit, a black, 2012 Volvo XC70 sport utility vehicle, was parked near the first one. When police arrived at the YMCA, the second victim, a 56-year-old Stamford woman, spoke with them.

Like the first woman, this victim told police she had arrived at the lot at 7:15 a.m. Her rear driver’s side window was smashed and a beige leather Ralph Lauren handbag valued at $200 was taken. Inside it was $100 in cash and four debit and credit cards, along with the woman’s driver’s license. Both cars were located three parking rows west of the YMCA entrance.

The surveillance video shows a dark-skinned man leaving from the right rear door of the suspects’ vehicle (a silver Toyota Highlander with license plates from a state other than Connecticut) then smashing one of the windows of the Jeep Compass. The driver of the suspects’ vehicle then got out and went to the second car, smashing its window. Both men then got back in their vehicle with their loot, and it drove off.

The police report had no information on anyone trying to use the debit or credit cards.

Darienite.com also has other articles about incidents possibly related to the Felony Lane Gang. This article has been updated several times, with added information, up to 4:46 p.m.

Dutchess County Sheriff’s Office Advice to Avoid Being a Victim

The Dutchess sheriff’s office published these tips to avoid being victimized by the Felony Lane Gang or thieves who operate in a similar way: