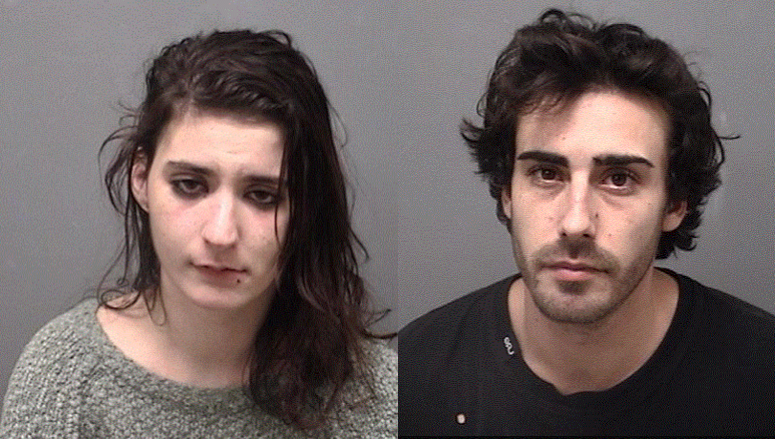 From left: Sennas Bayram and Lawrence Livolsi III, each arrested on Dec. 31, 2018

A 29-year-old man and a 26-year-old woman were found by police on Dec. 31 in possession of heroin, needles and a cell phone that had just been stolen from a downtown Darien business, according to police.

An employee at the Verizon store at 1075 Post Road called police at 1:05 p.m. on Monday, Dec. 31 to tell them a phone had just been stolen from the store. The employee gave police a description of a young man and woman.

Police found the couple walking together (a police announcement didn’t say where). The two were later identified as Sennas Bayram, 25, of Waterbury and Lawrence Livolsi III, 29, of Morris (about 10 miles north of Waterbury).

Police told the couple to stop. Bayram did so immediately, but Livolsi continued walking away from the officers, ignoring their orders. He eventually did comply with the commands to stop and take his hands out of his pockets.

As he removed his hands from his pockets, police saw that he was holding a hypodermic needle. He was told to drop the needle and immediately did so. Police found that the needle had been used.

When police searched Livolsi they found a bundle of packaged heroin, a pipe used for smoking crack cocaine and a second hypodermic needle (which was capped).

While searching Bayram, police found a cell Google Pixle 3 cell phone with a security device attached to it. The device is usually associated with the phone being tethered to a display counter, to make it harder to steal the phone. Police also found that the phone was in “demo” mode — typical of a phone on display at a store.

Bayram denied that she stole the phone, but she offered to pay for it if she wasn’t arrested. The manager of the Verizon store later identified the phone as the one that had been stolen. The phone is valued at $300.

Near where the couple were taken into custody, there was a parked vehicle that they had identified as theirs. Police K-9 Kenny alerted police that narcotics were in the vehicle, and a police search turned up a used syringe, a spoon and several small plastic bags with white powder residue on them.

Bayram at first identified herself to police with a false name, which resulted in her being charged with interfering with a police officer.

Bayram and Livolsi were each charged with fifth-degree larceny, possession of narcotics and possession of drug paraphernalia — all misdemeanors. Bayram was also charged with conspiracy to commit fifth-degree larceny, also a misdemeanor, and, according to the Connecticut Judicial Branch website, failure to keep a narcotic in its original container, a felony.

The two were each released on $7,500 bonds and each is scheduled to appear Jan. 11 in state Superior Court in Stamford.

Livolsi and Bayram each have criminal records, according to the Judicial Branch website:

On Oct. 5, Bayram pleaded guilty in state Superior Court in Meriden to second-degree breach of peace based on an Oct. 30, 2017 arrest by Cheshire police. She was sentenced to six months in jail, sentence suspended, and 18 months of probation.

Both Livolsi and Bayram have other criminal cases pending, mostly in state Superior Court in Waterbury:

In the same arrest, she was also charged with committing (on Jan. 15) third-degree larceny, third-degree identity theft (both felonies) and illegally taking a payment card (a misdemeanor).

Still other charges in that April 10 arrest came from Waterbury Police:  possession of marijuana, possession of drug paraphernalia and criminal impersonation.

On Oct. 2, she was charged by Watertown police with committing third-degree burglary and third-degree larceny the previous August.

Bayram and Livolsi have each pleaded not guilty to all of the charges against them.