When police stopped a gray Honda Accord on West Avenue at about 12:30 Wednesday morning, Nov. 21, they determined the driver was intoxicated with alcohol, and his passenger, also intoxicated, had marijuana and traces of cocaine in his backpack, police said. 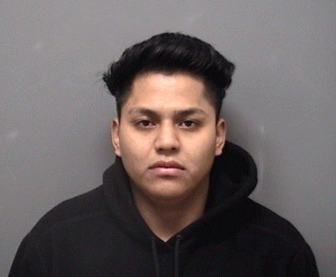 As the 19-year-old driver traveled east on West Avenue, the police officer saw the car cross the center dividing lines on the road several times. The officer stopped the vehicle at 12:31 near the intersection of West Avenue and Edgerton Street.

When speaking to the driver, the officer smelled an alcoholic beverage. The driver said he drank one beer. The officer asked him to take field sobriety tests outside the car, and the driver failed to do them correctly. He was arrested.

The passenger in the car, Alonso Valencia Ruiz, 21, of Stamford, also appeared to be under the influence — in his case, of alcohol, drugs or both.

His backpack was searched, and in it police found: two vape-pens containing oils that tested positive for THC (the intoxicating ingredient of marijuana), a BB-gun that looked like a black semi-automatic handgun and had a similar weight. Valencia Ruiz said the BB gun had been given to him.

On Valencia Ruiz himself, officers found three plastic baggies with cocaine residue on them. Valencia Ruiz admitted he had used cocaine at some point before the car was stopped. Valencia Ruiz was also arrested, both men were taken to Darien Police Headquarters.

At the station, the driver took breathalyzer tests. At 1:30 a.m., his blood-alcohol content was measured at 0.088 — just a hair’s breadth above the legal limit of 0.08. (Although it might have gone down in the hour that passed after the traffic stop — it’s also possible for it to have gone up). The second test, at 1:49 a.m., measured his blood-alcohol content at 0.0886.

He was charged with driving under the influence, failure to drive on the right side of the road and driving without a driver’s license. The teenager was released at 6:45 a.m. after posting a $500 bond. He is scheduled to appear Dec. 3 in state Superior Court in Stamford.

As Valencia-Ruiz, a resident of Knickerbocker Avenue in Stamford, was going through the arrest process at the station, police  discovered that an arrest warrant had been issued by a judge charging him with failing to appear in court in connection with a charge of third-degree assault in Greenwich.

Valencia-Ruiz was charged with having a weapon in a motor vehicle, drug possession, possession of less than half an ounce of marijuana and second-degree failure to appear in court. He was held on $5,00 bond for the Darien charges and $1,000 for the failure-to-appear-in-court charge. The next day he was taken to state Superior Court in Stamford.

Editor’s note: Darienite.com typically does not report the names of people arrested on charges of driving while under the influence or of possessing a small amount of marijuana unless there was a previous DUI or allegations of other behavior causing increased risk to the person charged or others.