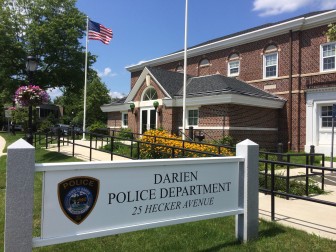 Osborne will oversee the Field Services Bureau, replacing Capt. Gary Pavia, who recently retired. Field Services includes not only the Patrol Division but also the Detective Division, recently commanded by Lt. Ronald Bussell, who also recently retired. (A replacement for Bussell was not announced.) The bureau also includes the Youth and Marine divisions, in which nearly all of the department’s sworn officers work.

The vacancies, caused by recent retirements, also mean the department is in the process of hiring new officers. The commission was scheduled to hold an executive session to interview candidates for entry level positions on Thursday, according to a notice posted in Town Hall.

Full Text of the Announcement

Here’s the announcement sent out early Thursday evening by Police Chief Duane Lovello (Darienite.com has added subheadlines and made editorial style changes to this announcement):

At a meeting of the Darien Police Commission held on [Wednesday] July 13, the Commission voted unanimously to promote five officers to fill vacancies caused by retirements. All of the promotions are effective July 24, 2016.

Lt. Raymond Osborne, a 32-year veteran, was promoted to the rank of captain and will assume command of the Field Services Bureau which includes the Patrol, Detective, Youth, and Marine divisions. He began his law enforcement career with the

Promoted to sergeant in 2000 and lieutenant in 2008, he served as the Administrative Lieutenant prior to returning to the Patrol Division. He is a 2010 graduate of the Roger Williams University Mid-Level Police Management program and a 2013 graduate of PERF’s Senior Management Institute for Police training program at Boston University.

Capt. Osborne holds both a B.S. and M.S. in Criminal Justice from Iona College and presently serves as an adjunct professor at Housatonic Community College.

A former firearms instructor and member of the Emergency Response Team, he holds a B.S. in criminal justice from Sacred Heart University and an M.S. in Emergency Management from the University of New Haven.

Sgt. Thomas “TJ” Whyte, a twelve-year veteran, was promoted to the rank of lieutenant and will be assigned to the Patrol Division. A graduate of the Fairfield County Detective School, he was previously assigned to the Detective Division and Training Division.

He is a POSTC certified Field Training Officer and Taser Instructor. He is a certified member of the Department’s Crisis Intervention Team and a member of the Accident Investigation Team. Promoted to sergeant in 2014, he presently serves in the Patrol Division.

In 2013, he received a M.A. in criminal justice from Sacred Heart University, where he was the recipient of the Gold Medal of Excellence Criminal Justice Award.

Detective Andrew Mastroianni, a 10-year veteran, was promoted to the rank of Sergeant. Currently assigned to the Detective Division, he graduated as the ‘Top Shot’ of his Police Academy Training Class in 2006.

The recipient of numerous awards and commendations, Sgt. Mastroianni serves as a Field Training Officer and a School Liaison Officer at Royle School. He is a POSTC certified instructor in firearms, patrol rifle, less-than-lethal weapons, and Fair and Impartial Policing.

A graduate of the Fairfield County Detective School, he also had a previous appointment as an acting sergeant in the Patrol Division and is a member of the Southwest Regional Emergency Response Team and the Department’s Crisis Intervention Team.

Detective Saverio “Sam” Boccuzzi, a twenty-seven year veteran, was also promoted to the rank of Sergeant. Assigned to the Detective Division in 2006, Sgt. Boccuzzi currently serves as a youth detective. In that capacity, he has implemented the popular ‘Cop Shop’ and Youth Police Academy programs.

A graduate of the Fairfield County Detective School, he previously served as a Firearms Instructor overseeing the department’s transition to a new sidearm. He currently holds a department record as a thirteen time winner of the department’s ‘Top Shot’ award.

He is a former member of the Southwest Regional Emergency Response Team, where he served as both an operator and a marksman; he also served as a Marine Patrol officer.

According to Chief Duane Lovello, “The relatively large number of promotions for a department of this size truly reshapes our command staff and brings new energy to an organization I am very proud of.

“The broad spectrum of talent and experience carried by these five individuals positions the department very well. They’ve all worked very hard and earned these promotions.”

“The Police Commission congratulates the five officers being promoted, especially Ray Osborne as he assumes the position of Captain. These five exceptional officers reflect the depth and strength of our outstanding police department.”