According to police: 25-year-old Bronx woman with a phony driver’s license tried to cash a check at a bank in Darien, but bank employees — already on the lookout for her — called police, who arrested her. 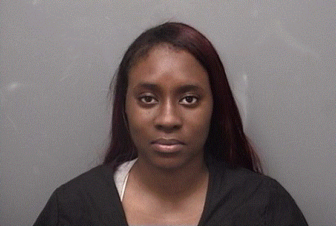 March 3 arrest photo of Kashai George, 25, of the Bronx

Bank employees told them that a woman, later identified as Kashai Princess George, 25, of the Bronx, had been going to other TD Bank branches in Greenwich and Stamford, claiming to be Saronji Basil and attempting to get account information and cash checks under that name.

An internal bank memo had gone out to various branches warning them of the woman. Then she showed up at the Darien branch. When George entered the bank and went to a teller, the teller immediately recognized her.

The teller alerted a co-worker, and the two of them stalled George until police came.

When police searched George, they found a fake cashier’s check, which was identified as the one she had tried to cash at the Stamford branch. The check was written out to Sarojni Basil for $4,532.

George, a resident of Kingland Avenue in the Bronx, was charged with first-degree forgery, third-degree identity theft and criminal impersonation.

She was unable to post a $10,000 bond and was held for an appearance in court on March 5, two days after her arrest. Later, she did post the full bond, using a bail bondsman. Her next court date is March 28.