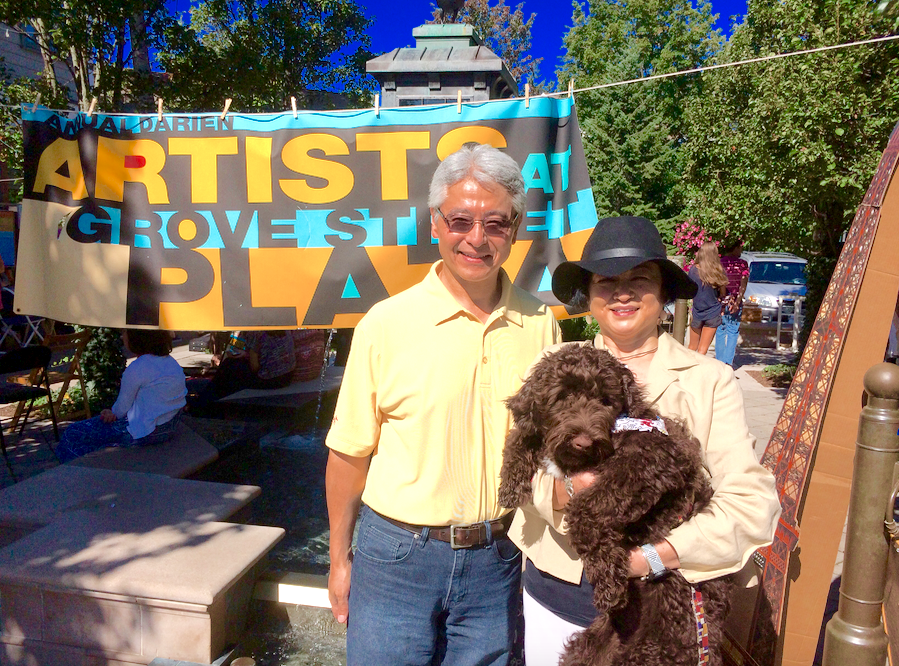 Event organizer and founder Nobu Miki with her husband, Heiki and her new Labradoodle, Freddie Picasso Miki. She lost her much-painted dog last year, which depressed her, but getting Freddie perked her up again, she said: "I got the energy to run this event from him!"

Many Darien events cost money, but that can be a bit of a barrier for people to go, artist Nobu Miki said Saturday morning, so when she started the Artists at Grove Street event back in 2015, she wanted to make sure it’s free.

She wants the event (which continues until 5 p.m., Saturday) to attract people who don’t need to make even a small investment when they decide whether or not to show up — they can come alone, with a friend, whether they’re interested in buying something or just want to look around and enjoy what they’re seeing, hearing and tasting.

“Look at these people!” she said “Everybody’s smiling!” 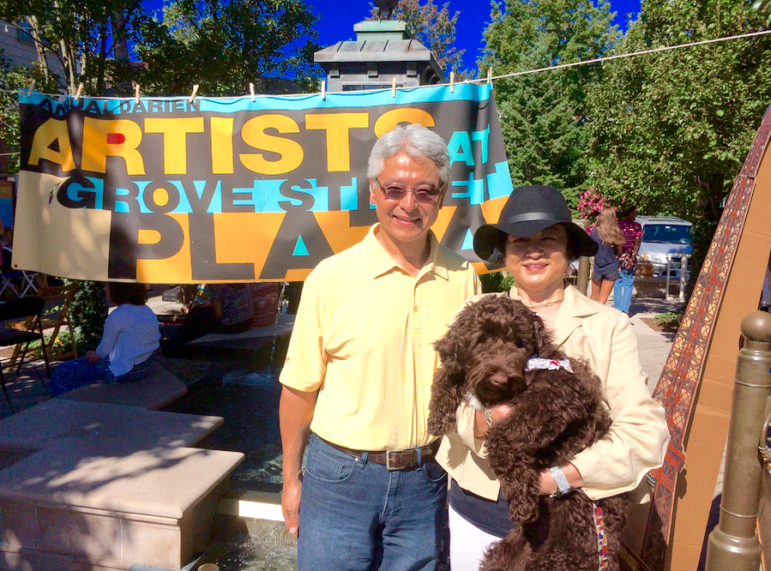 Event organizer and founder Nobu Miki with her husband, Heiki and her new Labradoodle, Freddie Picasso Miki. She lost her much-painted dog last year, which depressed her, but getting Freddie perked her up again, she said: “I got the energy to run this event from him!”

As young violinists played classical music, including that classic, “Pop Goes the Weasel” (an open violin case on the pavement asked for contributions for Darien Library), artists chatted with people walking by, a flower arranging demonstration continued, French-related edibles got sold and swallowed.

It’s both a local event selling locally made art — often of local scenes — and an international event: Not only did Nobu add a French theme to it, calling it “inspired by the artists of Montmartre,” but many of the artists themselves, while living in and near Darien, are from abroad. 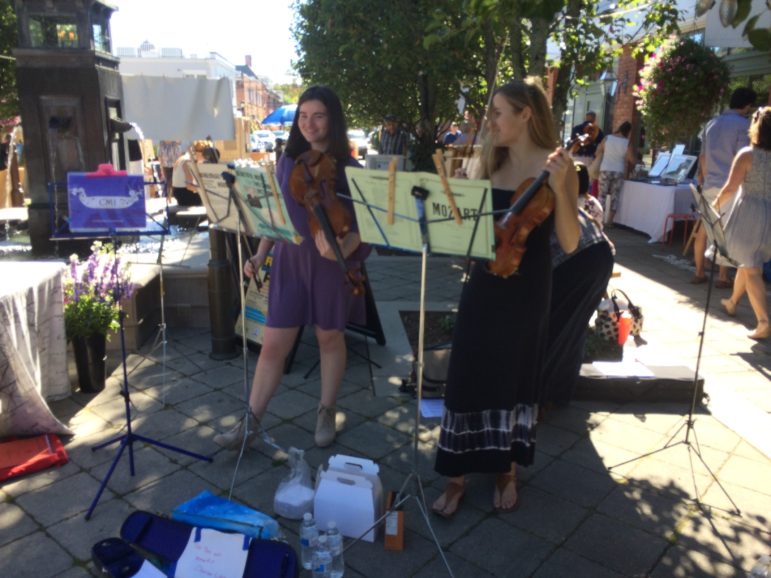 Pro tip, from what we heard in this pair’s rendition of “Pop Goes the Weasel”: When you get to the “POP goes the Weasel” part, you pluck a single violin string for the “POP”. Works well!

Originally from Scotland, Eunice Roy was showing her paintings “inspired by places I’ve been or things that catch your eye,” including flower pots from a trip to Cuba early this year or from her childhood in Scotland, or from Rowayton, where she’s on the board of the Rowayton Arts Center (which has lots of Darien members). 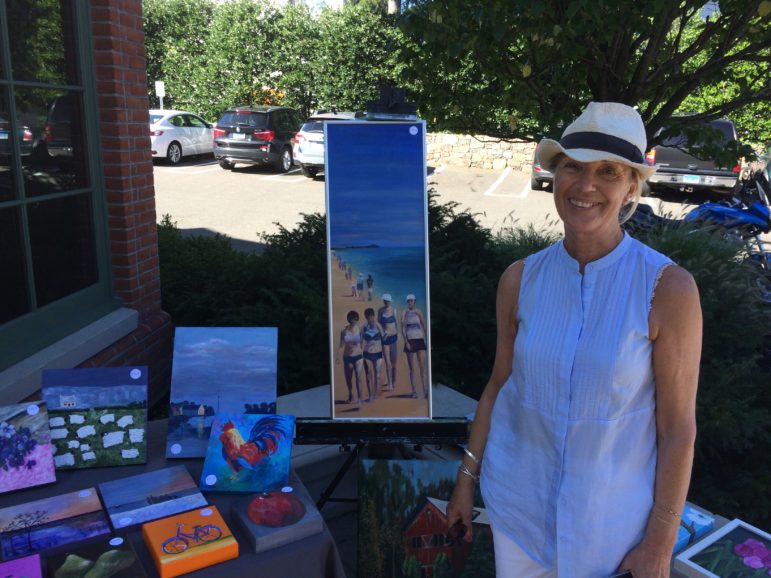 Eunice Roy, with her art at Grove Street Plaza on Saturday 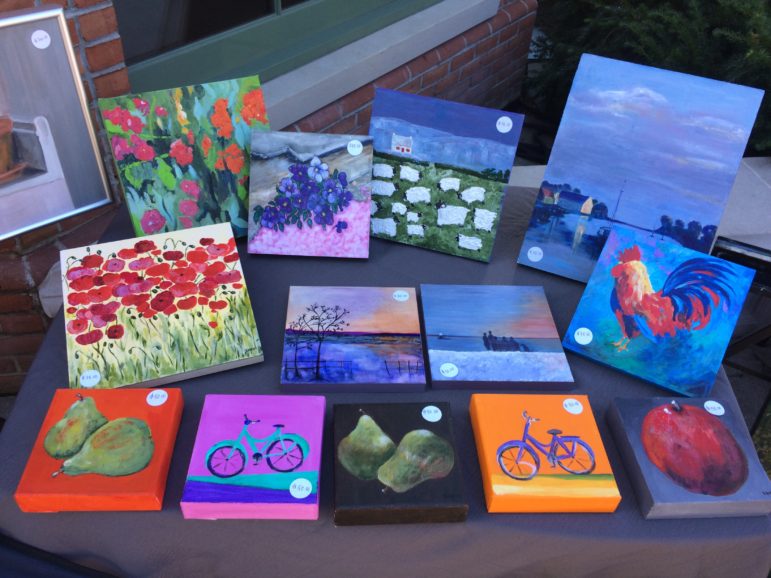 When other girls wanted dolls for Christmas, Eunice Roy wanted colored pencils. Like a lot of artists, the beauty of colors attracted her to art early on. These works are more colorful than they look in this picture (the trouble with pictures of art comes from the limitations of the photographer). 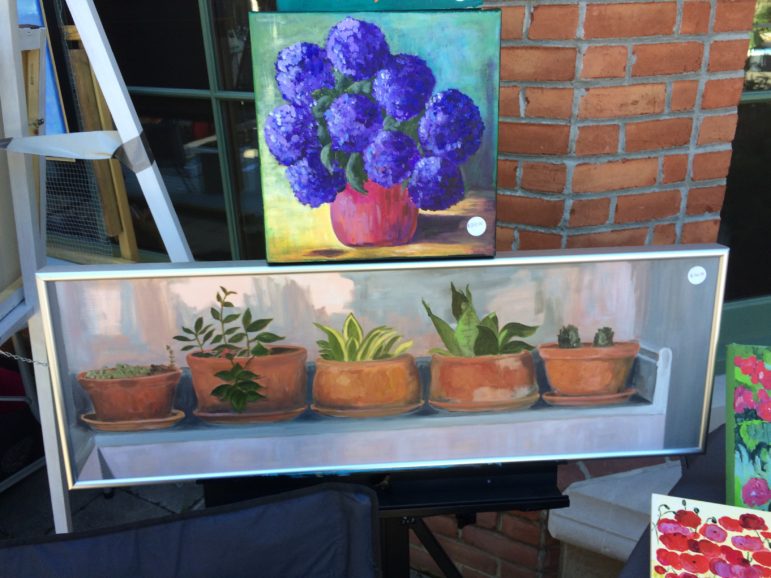 Eunice Roy passed by these flower pots at the bed and breakfast she stayed at in Cuba.

Maria Magallanes, a Darien resident for 13 years and originally from Mexico City (when asked, she said her family is fine, though she’d just heard about another earthquake), displayed paintings in a constructivist style, including one with an arresting take on Darien’s iconic Rings End Bridge.

We’ve all seen Rings End Bridge before. But not the way Maria Magallanes’ constructivist style explores it. Or maybe it’s just what inspired this acrylic on canvas, “Happy Bridge.”

In Mexico City, dolls called “Marias” are made and sold on the streets, and they’re a frequent subject of Maria’s. 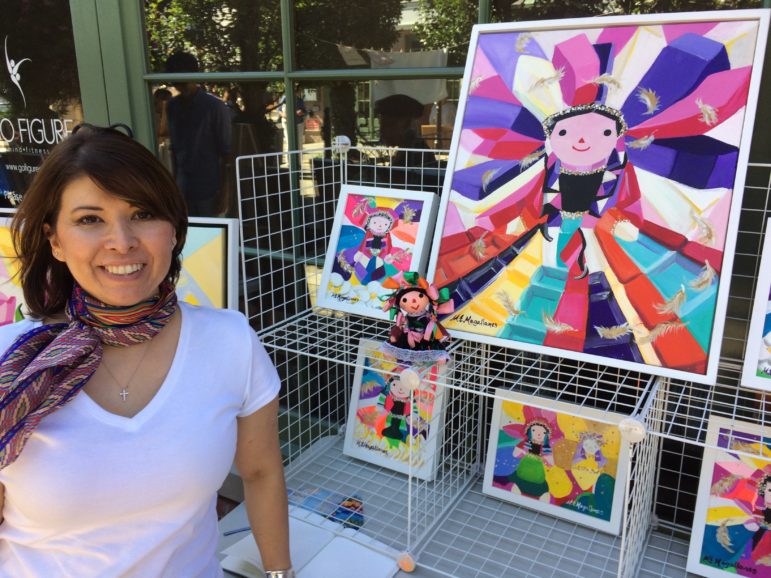 Maria the artist, with a Maria doll and a painting featuring it.

Darien native Nanci Natale recently became fascinated with some barns in Monroe that have been sinking into ruins. Before they’re gone, she captured them with her camera. 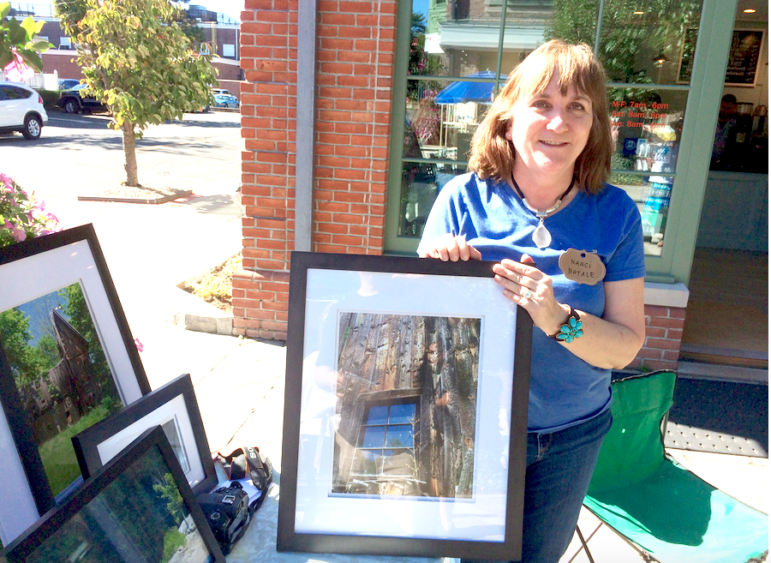 Nanci Natale: “I love the wood grains,” she said about some close-up photos. “They’re so beautiful. They speak to me.”

When this reporter was done interviewing Nobu Miki, we were about to pick up a dish with her rendering (in folk art) of Rings End Bridge, but it was snapped up by a woman with an Australian accent.

Until 5 p.m., Saturday, the intersection of Montmartre, Australia, Japan, Mexico, Cuba and Scotland is at Grove Street Plaza. No passport needed.