Later school starting times, the new Fitch Academy, technology in the schools and how the Board of Education communicates were some of the topics discussed by candidates for the school board at a recent election forum.

Although there aren’t more seats up for election than there are candidates (so the three Republicans and one Democrat are all expected to be elected), the event gave some insight on what three of the nine school board members are thinking about Darien education topics.

Republican David Dineen, also a Board of Education member, was on a business trip and sent his regrets about not being able to make the event, a league official told the audience. 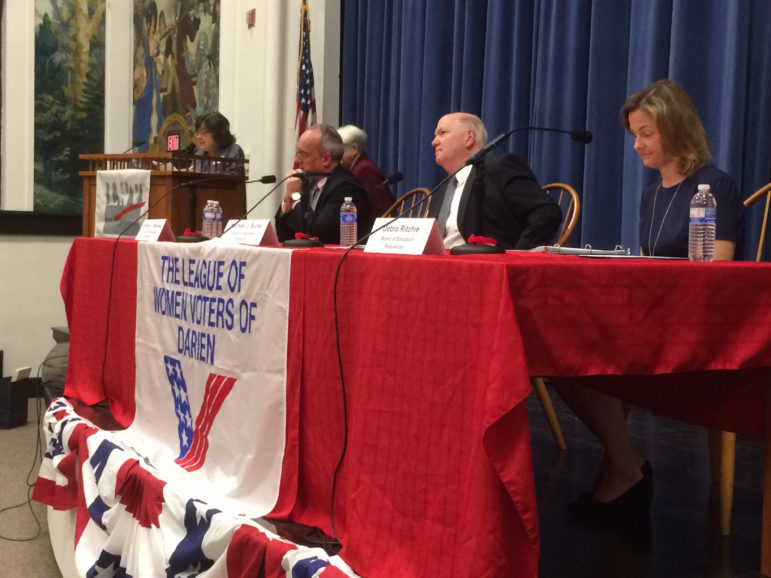 The three candidates at the Darien League of Women Voters forum

Although all three candidates said the effect of possible loss of state aid on the education budget was the most important issue facing the board, but none of them offered specific ways to cut the budget or otherwise deal with the potential cut in funding.

A week after the forum, a budget passed by the state Senate would cut Darien’s education funding only slightly, according to the CT Mirror news website. The budget still must pass the state House of Representatives, and then it will need Gov. Dannel Malloy’s approval or an override of his veto to become law. 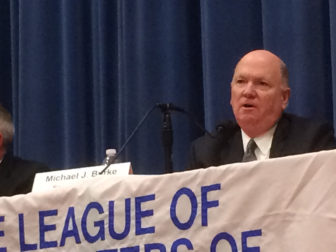 Michael Burke, a GOP candidate for re-election to the Board of Education, at the League of Women Voters forum.

“We need to be prepared to adjust for whatever Hartford does” with state education grants, Burke said. “We have to, through our budgeting process, make sure that all of our programs are true to our mission, they are carefully vetted and that they are performed with great efficiency.”

Maroney said the district needs to explore ways of providing more special education programs within the district, which could save money the way Fitch Academy has — by providing a much less expensive alternative to having students go to out-of-town programs.

The candidates were somewhat more forthcoming about where money needed to be spent.

“We [on the Board of Education] have great concern about the portables [portable classrooms where students are taught in schools without enough classroom space],” Burke said. “We’re trying to come up with a plan to phase them out […]” 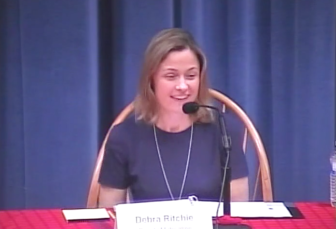 Image from the Darien TV79 video of the candidate forum

Debra Ritchie, a Republican candidate for the Board of Education and recently an appointee to it.

Ritchie said: “It’s my hope that, over time, we can gradually implement the top [capital projects] priorities in a fiscally sound maner but make improvements that are needed for our schools. It’s unacceptable that our children are in portables. They’re not safe. That should be our No. 1 priority, and I’m passionate about that.

She also said the electrical system at Royle School “is inadequate for the current technology that we need in our classrooms today, so I think it should be one of our No. 1 priorities going forward, but we can do it in a fiscally conservative and responsible manner […]”

The school district tries to put capital projects on a schedule that won’t overwhelm either the regular budget or bonds that the district issues to pay for them. Maroney said several schools needed significant funding, but that one problem has been that in previous decades, a number of school buildings or projects were done at once, so in later years and decades, repair and maintenance costs mount at about the same time.

“Maybe we almost need to do a 20-year plan to kind of space out the schools — of how we’re going to replenish them, revise them,” he said. Maroney also suggested that a “chief operating officer” position might be created for the district, freeing up the superintendent of schools to focus more on education.

“I would disagree with that proposal,” Burke said. When the current superintendent, Dan Brenner, was hired, the Board of Education recognized that he had extensive experience in renovation and construction projects, so hiring another administrator would be a waste of money.

Asked which education effort in the district “excites you the most,” all three candidates brought up Fitch Academy.

“I think that’s a really great initiative,” Maroney said. “I’d actually like to see it expand, and how do we do things different, and how can we stop displacing students [sending them out of the district for special programs] and maybe do something like Windward [a school for children with “language-based learning difficulties”], where we don’t have to ship kids out there and maybe build some in-house work in Darien.”

Burke said Fitch is “a very exciting concept,” and “I’m very heartened to hear how well the academy is going so far, and I look forward to a bright future for it.”

Ritchie said she also thought the Fitch Academy is one of the most exciting programs in the district, “but I’m going to talk about technology, because they both spoke about Fitch. […]

“I think bringing in technology is where we are in this day and age, and we need to integrate that into the classroom, so I think it’s wonderful that it’s starting to roll out into the high school, and it’s wonderful that our elementary school and middle school kids are using it. […] I think it’s important our kids are very intuitive when it comes to technology. […]”

Asked what they thought about whether Darien should start high school and middle school later in the day, as Greenwich has just done, all three candidates resoundingly rejected the idea, although Ritchie said the district should wait and see how it works in Greenwich, and in New Canaan if that town adopts the same policy. 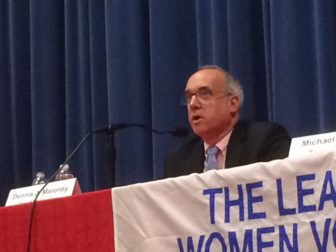 Dennis Maroney, a GOP candidate for Board of Education at the League of Women Voters forum

“I’m against it,” Maroney said. There’s a cost involved in changing bus schedules, and scheduling sports games with other towns who don’t have later-in-the-day schooling is made more difficult. He said he’s heard from Greenwich parents he knows that their children just go to bed later, so they’re not getting more sleep as a result of the change. Ritchie largely echoed Maroney’s comments.

Burke added, “I think Denny’s a thousand percent right. I would put this into the category of things that are not going wrong with our school district and to not bother with.”

On How Well the Board Communicates

Months after a number of Representative Town Meeting members and a member of the Board of Finance criticized the Board of Education for not being forthcoming with budget information, the three candidates were asked about whether the school board needed to improve its communicating. (Maroney, who had been one of the critics, later replaced Board of Education Chairman Michael Harmon as a GOP nominee for a seat on the school board.)

Maroney said a Web page answering frequently asked questions of the board would be helpful.

“I think the idea of, you know, we said it once at a meeting, and you need to watch the meeting [on TV79’s Vimeo Web pages] is not sufficient enough, and there needs to be more communication,” he said. “The board needs to market the budget themselves, and it needs to be brought to the rest of the town.”

Burke said the board is doing just fine:

“I disagree with those points to the extent that they reflect that there isn’t great communication going on. All of our board meetings are on television. All of the documents, every single document, every single board member looks at are on the website [which] is available to anyone. […] We are available to answer questions if you email them. […] To those who would say we don’t communicate, I would encourage them to tune in and read.”

The Candidates Introduce Themselves

Each of the candidates at the forum also described his or her background. Here’s what they said about themselves:

A town resident since 1996, he has one daughter in college and another is a junior at Darien High School. An RTM member since 1998, he has been on the RTM Education Committee since 2002 and its chairman for the past six years.

He is a vice president and senior perfumer at International Flavors and Fragrances, with an office in Manhattan. He received his bachelor of science degree in psychology and chemistry from the University of Connecticut.

Burke, a litigator with a law firm in White Plains, N.Y., Burke is a former member of the RTM Education Committee who served on it while Maroney was a member and chairman. Burke has already spent a term on the Board of Education.

Burke has twin sons who are now freshmen at Darien High School.

Recently a member of the RTM (for eight years) who sat on the Finance and Budget Committee, she was a co-vice-chair of the committee concentrating on the education budget until earlier this month, when she was appointed to the Board of Education to fill the seat made vacant when Sara Schneider Zuro resigned from the board.

Ritchie is a graduate of Villanova University, and after a career in banking she moved to town more than 15 years ago. Her two children are currently both in Darien schools. She served on the Youth Commission and was chairman of the Tokeneke and Royle Building Committee.

Darien TV79 Video of the Forum

Here’s the entire forum, sponsored and organized by the Darien League of Women Voters. Darienite.com will also have extensive excerpts of what was said at the forum: