Nancy Hart Glanville Jewell, of Houston and formerly a long-time resident of Darien, died peacefully this past Sunday, the Aug. 2, 2020, at the age of 92. She died as she lived and as she wished, always a lady. 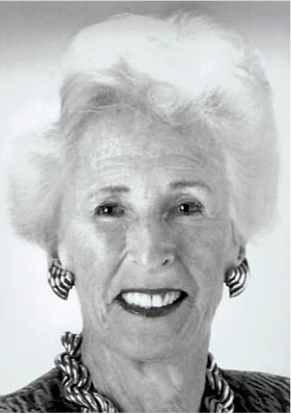 Born on the Aug. 6, 1927, Nancy was the youngest of the three daughters of JP and Delphia Dixon Hart of Tacoma, Washington. She graduated from Scripps College in Claremont, California, in 1949 and later that year married Jim Glanville of Dallas, Texas.

They lived in Houston before moving to Darien in 1959, where they raised their four sons: John Glanville of Santa Barbara, California, Charles Glanville of London, Tom Glanville of Houston, and Rob Glanville of Greenwich.

After the death of Jim Glanville in 1992, Nancy in 2001 married George H. Jewell of Houston, and had a happy 12 years with George until he died in 2013. Nancy moved to the Hallmark in Houston in 2015, where her gift for making friends gave her much joy and comfort.

In addition to raising her family and giving her incredible love and support to her husbands and her children, Nancy received enormous pleasure and comfort from a beautiful home.

From early beginnings with Jim on Banning Drive in Houston and Winding Lane in Darien to Contentment Island in Darien, North Brookwood in Stratton, Larchmont Road in Houston, Crystal Loop in Indian Wells, and Villa D’Este in Houston, every home was well appointed and decorated and cared for with her attention to detail and love of place.

Intellectually curious, she read extensively and travelled the world with Jim, with friends (particularly with the Madison Council), or with her children and grandchildren.

Nancy provided intelligent leadership and her considerable skills and hard work to many charity boards and organizations. She was chair/president of the Noroton Presbyterian Church, YMCA of Darien and Town of Darien Beautification Commission, as well as at various times serving as chair of board committees for Scripps College, the Madison Council of the Library of Congress, Pittsburgh Theological Seminary, Mid-Fairfield Hospice, Land Trust of Darien and Junior League of Stamford-Norwalk.

She had also been a member of the boards of Museum of Fine Arts, Houston and its Bayou Bend Collection, Garden Club of Darien, Children’s Aid Norwalk and Five Town Communities Fund.

Nancy was proud to have been in the inaugural class of Life Trustees at Scripps College and a Director Emeritus of Pittsburgh Theological Seminary.

Nancy enjoyed her many friends at Wee Burn and Tokeneke Clubs, Darien, River Oaks and Houston Country Clubs, Houston, and El Dorado Country Club, Indian Wells, California. She was an excellent tennis player and skier, although despite her athleticism, to Jim’s frustration she never quite got golf.

Nancy is survived by her four sons and their spouses/partners, Christie Glanville, James Hogan, Liz Glanville and Laura Glanville; and by her nine grandchildren: James Glanville of Santa Barbara, Mackenzie and Pierce Glanville of Houston, Ali Greenfield of New York, and Ryan, Taylor, Rowan, Reid and Devyn Glanville of Greenwich.

She was always pleased to be included in the families of George’s children, Bob Jewell and Susie Cannon of Houston and Kathy Wommack of Midland. She enjoyed meeting up with her nieces and nephews whenever their paths might cross.

Arrangements for memorial services in Houston and in Darien are pending and will be announced at a later date once attendance restrictions are lifted.