Mary Elizabeth “Bobbie” Heidemann died Sept. 10 after a long illness. She was 86. 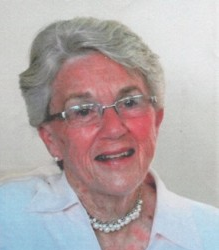 She was born on Jan. 12, 1932 in Stamford, the second of three children to Clarence and Elizabeth Hertz. Mary became forever known as Bobbie when her older brother, the late John Dickie Hertz, then just a toddler, mistakenly referred to his baby sister as “bobbie wibber.”

Bobbie’s life changed when she met Paul Hans Heidemann, a German immigrant, in 1948 at the Griebs Pharmacy soda fountain in Darien. Despite his limited understanding of English, they fell in love and eventually married on April 19, 1954. They remained happily married until his death in 2006.

She received her nursing degree from Penn Hall Girls’ School in Chambersburg, PA in 1952, and took her first job at a hospital in New Rochelle, NY, caring for premature infants.

After taking time off to raise her children, she worked at Lea Manor Convalescent Home in Norwalk, and then served as supervising nurse at Darien Convalescent Center in Darien. Fiercely dedicated to her work, she once recalled that her patients were always pleased when she was on duty.

Paul and Bobbie retired to Cape Cod, their favorite vacation destination, in 1992. They purchased a large house on Route 6A in Barnstable and enjoyed hosting their children and grandchildren when they visited during the holidays.

In lieu of flowers, her family asks that donations be sent to the Wounded Warrier Project and/or the Cape Cod Times Needy Fund.