John Francis “Jack” McGoldrick, formerly of Darien, passed away at his home in Brevard, North Carolina, on June 28, 2021. He was 91. 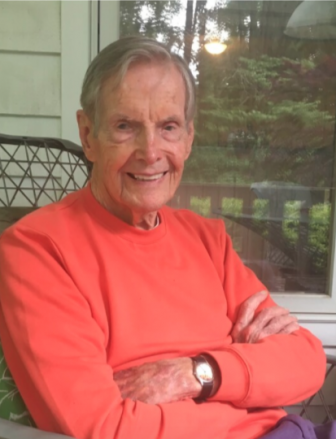 Born in Brooklyn, New York on March 30, 1927, he grew up in Forest Hills, New York, the son of Frank and Jean McGoldrick. He was preceded in death by his wife, Peggy, following a 65-year marriage.

A graduate of the University of Notre Dame with a degree in journalism, he saw active duty as an infantry officer in the 2nd Marine Division and as a public affairs officer at HQ4th MCRD in Philadelphia. There he met Peggy, a fellow Marine. On release from the military, they were married in 1952.

The family moved to Darien in 1969. After a long career with American Can Company, Jack took early retirement as vice president of corporate communications. With their kids grown, he and Peggy moved to Brevard, and he worked 10 more years as a marketing and public-relations consultant in the packaging industry.

In Brevard Jack served on the board of the Transylvania County Library Foundation and was treasurer during the campaign to build the new library. He was also a member of the original Community Advisory Board for Western North Carolina Public Radio, a member of Sacred Heart parish and a long-time volunteer at Sharing House.

A memorial Mass will be offered Sept. 18, 2021 in Brevard. In lieu of flowers, donations can be made in his memory to the Transylvania County Library Foundation.