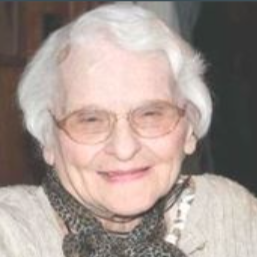 Jean Anderson Rittenhouse Stouter passed away on April 5, 2020 at the Western Rehabilitation Care Center in Danbury. June 15 would have been the celebration of her 93rd birthday.

She was born Jean Sylvia Anderson in Darien and was the eldest daughter of the famed Prohibition Era Darien police officer known as “the Lone Wolf of the Boston Post Road.” June 15, 2020, would have been the celebration of her 93rd birthday.

Despite being born legally deaf and suffering from multiple sclerosis, Jean went on to defy all the odds with her indomitable spirit. She learned to lip read, became an avid reader and an artist. She graduated from Darien High School in 1945.

Advised that she would not be suitable for college, marrying, and having children, she became a secretary and then proceeded to marry William Samuel Rittenhouse and went on to have four children, four grandchildren, and two great-grandchildren.

She became an artist of local renown in Danbury. After her first husband died, she remarried George Stouter of Danbury and established a design studio known as JARS Design, and many of her designs adorn pins and cards alike.

Jean was the oldest living continual member of the Ridgebury Congregational Church. She also was a regular fixture of the Danbury Senior Citizen Center.

In 2011, she published a novel about her father, “Amos, The Lone Wolf of the Boston Post Road.” She will be missed by family and friends.

As a lifetime Democrat and FDR enthusiast, perhaps her spirit is eagerly awaiting the defeat of President Trump in the upcoming election.

For those who wish to honor Jean’s spirit, you may contribute to any Democratic candidate, the Ridgebury Church, and/or Western Connecticut State College.

— This obituary was previously published in various Hearst Connecticut newspapers.